The Daily Nexus
News
UCSB Professor Part of Scientific Trip to North Korea
October 27, 2016 at 5:34 am by Tamari Dzotsenidze 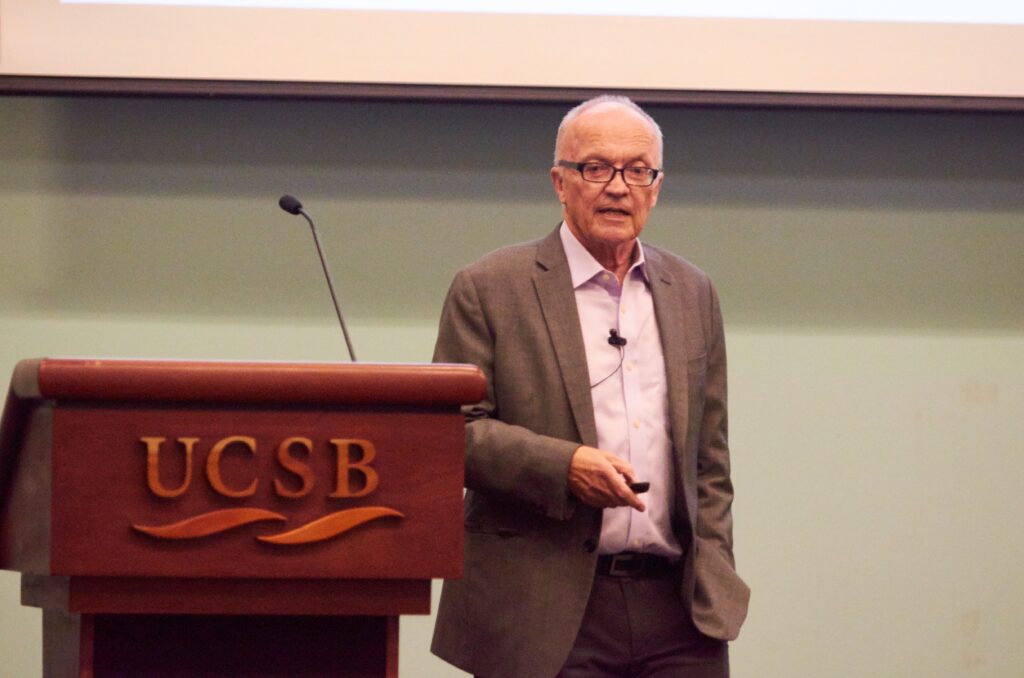 Kydland, a Nobel laureate in economics, joined a group of academics and journalists traveling to North Korea last spring for a peace conference. Though the trip promoted diplomacy, he noted that it was “purely scientific.” Soham Tikekar / Daily Nexus

The summit, organized by Uwe Morawetz of the International Peace Foundation, was originally supposed to support six Nobel laureates traveling to North Korea for a week, but ultimately three laureates cancelled.

Kydland, Sir Richard Roberts, Aaron Ciechanover and Prince Alfred von Liechtenstein were accompanied by journalists from the BBC and The Nation Thailand.

Kydland apologized to those who had faced harsh conditions in North Korea at a presentation on Oct. 18, saying their trip did not equate to condoning North Korea’s actions.

The mission was purely scientific, he said, not political. At the end of the summit, Liechtenstein said, “It has nothing to do with politics; we try to find common ground to bring people together,” Kydland recalled.

The International Peace Foundation has been hosting “Bridges” summits since 2003 in various Asian countries, including Thailand, Singapore and Vietnam. Their goal is not to take sides but to achieve “a better cooperation for the promotion of peace, freedom and security,” their website states.

Though there were initial concerns about their conditions and treatment, the laureates were all “treated very, very well,” Kydland said. They were all greeted with a welcome banquet by the Korean National Peace Committee and given high-speed, unrestricted internet.

The BBC, which travelled with them, ran into issues when they posted a video accusing a North Korean hospital of having “fake doctors.”

“We were flabbergasted,” said Kydland, who knew that they were being spoken to by hospital administrators. The video had been a “complete lie,” he said, and it greatly offended the North Korean government.

Though their goal was to “have a dialogue” with Kim II-Sung University, Pyongyang University of Science and Technology and the Kim Chaek University of Technology; the group also hoped to see daily life during the weekend. Kydland was surprised by the lack of cars and the presence of “traffic girls” on every corner.

According to Kydland, the students all spoke English very well, which greatly impressed Liechtenstein. Ciechanover and Roberts were both impressed by the level of research in chemistry and medicine, while Kydland reported a lower level of economics research.

By interacting with the students and professors, they hope to start opening doors to knowledge that they do not have otherwise. In a quote shared by Kydland, Liechtenstein said we “may have disagreements and conflicts, but math and science are a universal language.”

Kydland has not had contact with the professors or students since leaving North Korea, but is open to the idea of going back in the future.