The Daily Nexus
Science & Tech
The Santa Barbara Basin: Home of the Largest Underwater Bathtub Ring Caught on Camera
October 27, 2016 at 9:00 am by Natalie Overton

A day on the ocean has led earth science professor and researcher David Valentine and his research team to discover a giant mat of bacteria in a ring around the Santa Barbara Basin’s floor.

Valentine and his team had unscheduled time between shipboard operations and out of curiosity, the team decided to dispatch an autonomous underwater vehicle to capture images of the sea floor in an attempt to look more closely at the life in the region. What the photos showed, however, came as quite a surprise to Valentine.

“We expected to find changes in the biological community,” he said, “but we did not expect to find a mile-long colonization of bacteria.”

Thanks to their passive curiosity, Valentine and his researchers have discovered a 1500-foot deep secret burrowed in the Santa Barbara Channel. The photos may prove to be highly significant.

The white lines in the picture above represent the track the autonomous underwater vehicle took when surveying the seafloor. The red lines show just a part of its photographic survey around and inside the bacterial mat. / Courtesy of pubs.acs.org

“We suspect the bacteria play an important role in controlling the environment deep in the Channel,” Valentine said. “Inasmuch as they control the chemistry during certain times of year.”

He adds, however, that these bacteria lose this chemical influence when seasonal changes in ocean circulation fill the Basin with oxygen-rich water, lowering the nitrogen content and causing the bacteria to recede into the sea floor.

The appearance of this bacterial colony is seasonal and regular, relying primarily on the amount of oxygen in the water. These bacteria also aren’t rare at all, according to Valentine.

“Bacteria of this type are found in many other locations,” he said, speaking about South America’s seasonal growth, and the bacteria appear “typically localized around point sources of hydrogen sulfide, their primary food source.”

These large, filamentous bacteria thrive in low-oxygen, high-nitrogen conditions and burrow into the sulfur-rich sediment that collects around the middle, or ‘depocenter,’ of the Basin’s slopes. When the oxygen levels annually decrease (and nitrogen levels increase) in that part of the basin, the bacteria use the nitrate salts in the oxygen-depleted water combined with the sulfur in the sediment to grow into a 2-3-kilometer long mat that resembles a ring stain in a bathtub.

Generally, low-oxygen zones (like that in the Santa Barbara Basin) are accompanied by a negative image of still, lifeless water. These “dead zones” do exist and are caused by humans. However, their natural counterpart called “oxygen minimum zones” result from seasonal, cyclical changes and are not lifeless at all. For that brief span of the year, a host of life coats the sea floor, only to retreat when oxygen levels spike again.

Bacterial formations like this one play a big part in nitrogen fixation. High nitrate levels in the ocean can lead to the dead zones because the nitrates act as a fertilizer for algae. After these photosynthetic organisms eventually cover the surface, blocking out all light for the oxygen-producing plants below, they fall to the bottom and are decomposed by oxygen-consuming bacteria on the seafloor.

The whole area is subsequently robbed of oxygen and nothing can live there. These bacteria, however, remove the nitrates from the water and fix them into the soil, inhibiting the dead zone cycle. Because of this service, these bacterial colonies have been recognized worldwide as a major “nitrogen sink” and are thought to actually play a part in alleviating global warming. 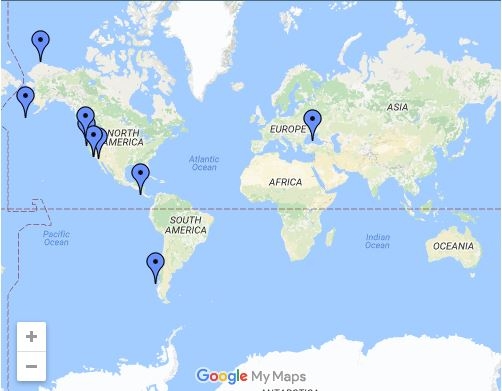 While Valentine and his team made their discovery here in Santa Barbara, above is a map of the different countries Valentine’s research has taken him. / Courtesy of methane.geol.ucsb.edu

The results of this accidental discovery were published in the Journal of Environmental Science and Technology, and while this bacterial colony is not exactly new to the scene, the excitement surrounding the Basin’s colony is well-founded. As stated in the journal, “If the extrapolation is accurate, this structure could represent the largest contiguous bacterial growth yet mapped.”

This alternative growth fascinates Valentine. “I find their lifestyle quite amazing,” he said. “They use sulfur like we humans use food, and they use nitrate salts as we use oxygen.”

As a professor of microbial geochemistry in the Earth Sciences Department here at UCSB, he has put a lot of time into sharing his passion for the ocean with his students.

“I enjoy the opportunity to engage students across the spectrum,” Valentine said. “From non-science majors interested in the state of the ocean to graduate students seeking to unlock the ocean’s deepest secrets.”