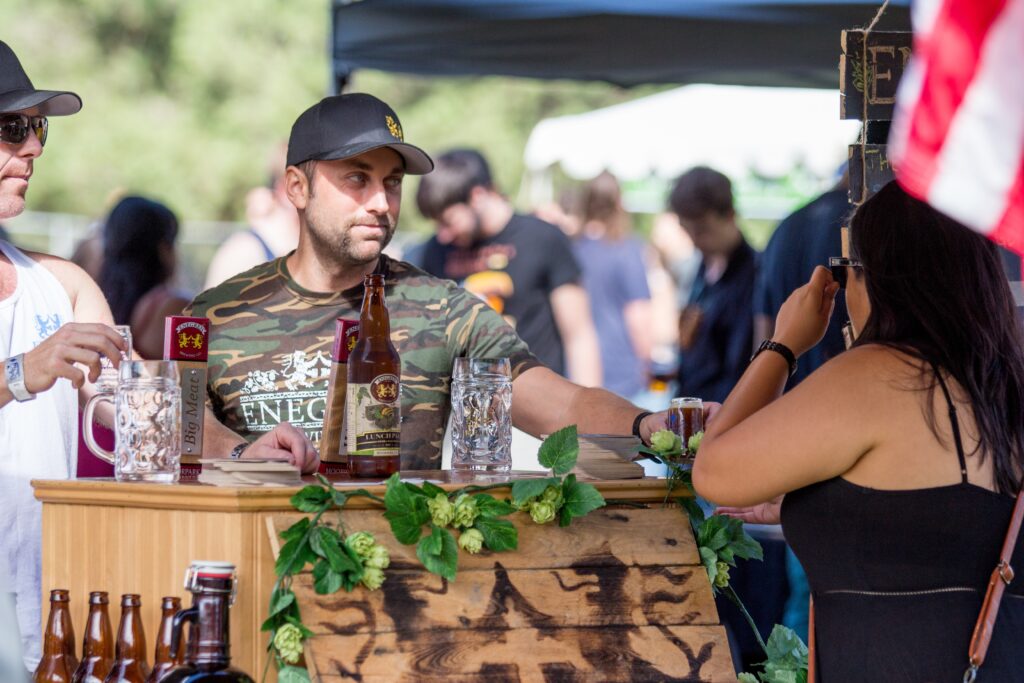 Stomachs filled with a substantial base of carbohydrates and décolletages adorned with pretzels to boot, we confidently surveyed the field of flowing taps below, ready to conquer the 2016 Santa Barbara Beer Fest. Sharply at noon, the picket fence separating us from our salvation was pulled aside, and we drinkers descended en masse. What follows are the most memorable brews and bites of the day among our group of four.

Das Boot Oktoberfest Ale — Poseidon Brewing Company
A feast for the eyes and the taste buds, this mahogany ale boasted a rich, dark and plentiful head with a velvety finish to match. Das Boot was dangerously drinkable, made in the Märzen style like a Bavarian lager, but inoculated with English ale yeast to add complexity.
Also on tap at Poseidon was their Spindrift IPA. Though they rightly advertised the IPA as floral (it tasted as light and pleasantly bitter as a mouthful of nasturtium), I would argue that Das Boot was almost equally so. Though the ale delivered a malty taste with hints of honey as promised, there was still that floral lightness there in a perfect harmony that left us all considering seconds.

Avocado Honey Ale — Island Brewing Company
Tasting glass still full of a forgettable California Ale, I frantically sloshed over to the banner promising me the famed Avocado Honey Ale. Indeed, the avo ale has yet again graced the tongue of a Nexite and, again, it has left said Nexite in awe. Although I had been warned countless times otherwise, I still expected a creamy, savory, distinctly avocado-y brew. Instead, Island’s pride and joy tended more toward the honey aspect of its description in terms of flavor, while perfectly drawing its texture from the decadent California fruit. How it was so sweet and light yet creamy at the same time, science may never understand.
As if the festival were arranged by God himself, Mesa Salsa Company stood directly next to Island, doling out tomatillo and crispy tortilla that was “perfect” with an indulgent sip of the ale, according to fourth-year political science major Cole Hoyt. 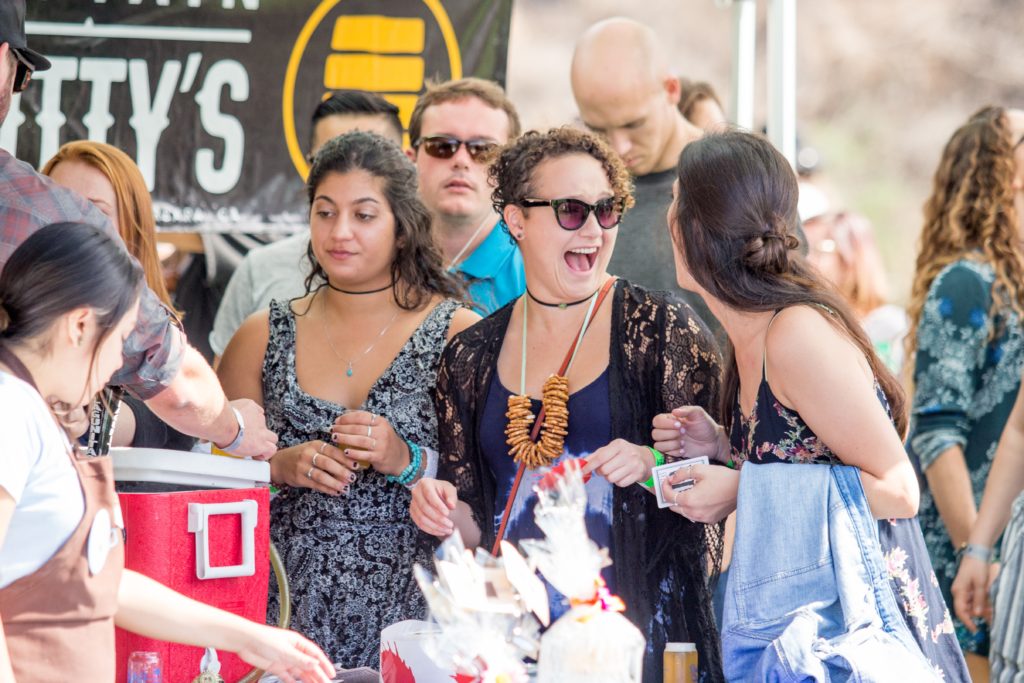 Citrusy Wit — Stone Brewing
Expertly poured, this brew sat in my glass with a halo of pure white head, its body a glowing gold. As a fan of citrus and of presentation, I couldn’t wait to taste. Alas, I should have waited. I suppose citrusy wasn’t wrong in describing the beer, but it was more of a grapefruit-rind flavor than the tart, sour, juicy one I was expecting. It was light and objectively pleasant, but certainly not what my palette was prepared for.
“Very summery,” Hoyt commented.
“Tastes like the white part of a watermelon,” fourth-year environmental studies major Briette Shea said, a bit less enthusiastically.
*Intermission*
At this point in the day, 1:04 p.m. to be precise, we had made some friends while sharing sunscreen and waiting for porta potties, tipsily written some haikus and tasted plenty of beer. Intermittently we had stopped by the less traditional booths for bundt cake, pizza, cheese and, my personal favorite, micheladas. For those of you unfamiliar, micheladas are a surprisingly scrumptious concoction of Clamato and beer. I am not ashamed to admit that I went back for thirds after experiencing Pacific Pickle Works’s spicy, tangy, refreshing michelada garnished with a snappy and flavorful pickled green bean. After a morning of rich carbs both solid and liquid, this was exactly what I needed before another round of brews.
After some time on a grassy hill, sipping the dregs of Island’s tasty and mellow Islanderfest Märzen Lager, debating whether this festival represented America properly or not (“small business and entrepreneurship,” Hoyt argued; “No, it’s about Monsanto and Coca-Cola,” Shea retorted), we were back in full force.

Scottish Raspberry Ginger Beer — Crabbie’s
Hoyt slipped away from our grassy refuge and swiftly returned with a glass full of brilliantly red elixir. After a sip of the stuff, I had a “Ratatouille” moment. You know, the kind that transports you back to a childhood memory and your heart softens and makes you a kinder critic. I’m not usually one for sweetness, and even though this was reminiscent of “strawberry syrup,” as Shea put it, I felt like a happy seven-year-old sitting on my parents’ barstool sipping a Shirley Temple as they poured themselves Manhattans. Even without my bias, though, this bottled, not tapped, ginger beer won over Hoyt.
“It’s refreshing with a slight kick,” he said happily, downing the stuff. 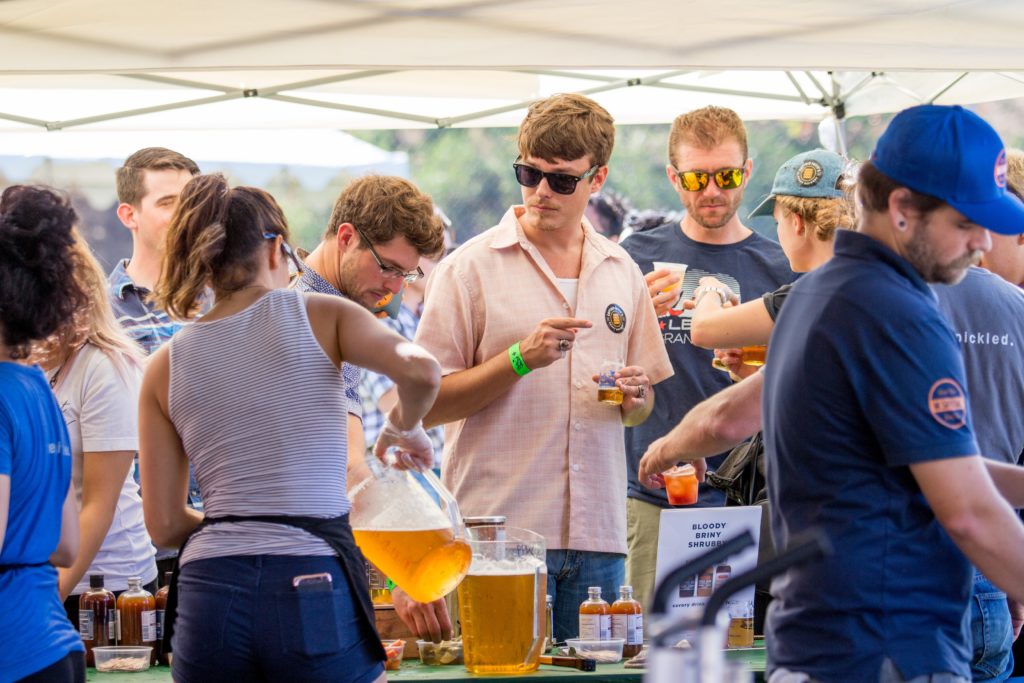 Calypso Cucumber Sour — Captain Fatty’s
This shit is my numba one for life. As a fan of sour beers, I may be biased, but from the first sip I was hyped as hell. Foamy and effervescent, I could drink this lemon-cucumber-spa-water-turned-alcohol all damn day, every damn day. Though Captain Fatty’s sour elicited grimaces from my friends, I’d like to consider them outliers with childish tastes for the sweet and unrefined. After all, everyone around us seemed to be enjoying it along with me, and the brewers tapped out of the Calypso first.

Westy — Bristol Brewery
On a search for cider, we found this ciderhouse-only exclusive. As a microbiology dork and amateur homebrewer of cider myself, I had to ask about the fermentation process. The tapper told me the sugar was metabolized by a blend of natural yeast from the apples and a cultured wine yeast. Perhaps it was power of suggestion, but this cider tasted very yeasty to me; countless hours working in a yeast lab on campus has fine-tuned my senses in this area. Still, I enjoyed the powerfully apple-y brew overall. 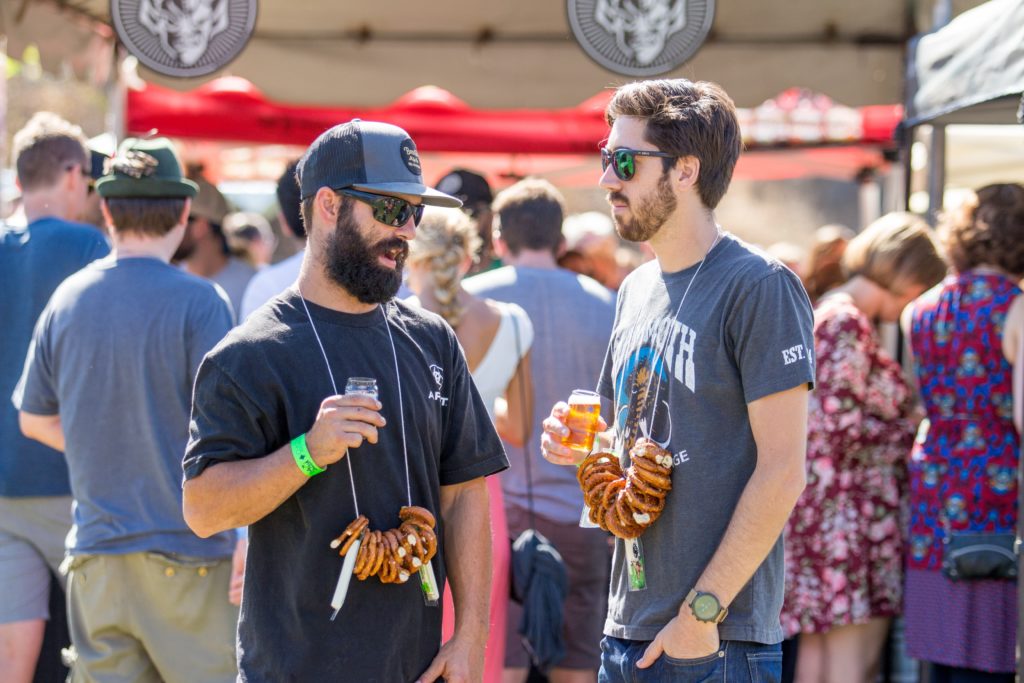 Easy Jack IPA — Firestone Walker Brewing Company
My very first beer-tasting experience was at the Firestone Brewery in Buellton. I ordered a flight, but was one beer short and asked the server for a recommendation. Easy Jack had just been released that day, and the waitress could not talk it up enough. Indeed, it lived up to her hype, but I have not had it on tap since. On this day, I was ready to be blown away again by the sweet, hoppy goodness. After a taste, I decided it had lived better in my memory, but was still tasty nonetheless. Notes of clove hit the top of the throat at first gulp, and an exhale of satisfaction yields a mango-smoothie-esque sweetness with a lingering malty aftertaste.
Included in the many choices Firestone was tapping was their Pivo pilsner. We each sipped this as well and decided it was a sadder, watered-down version of the Easy Jack.

One-Hitter Tuberfest — Lagunitas
By 3 p.m., most of the smaller breweries were tapped out; I was sad to discover that Island had run dry of their Avo Honey Ale just over two hours into the festival, and I was left without a refill. Alas, we stood in line with the bulk of the crowd for Lagunitas, finally reaching the front where only one brew was available: the One-Hitter. Like the Easy Jack, this one grows on you. Truly, though, all I could say about it was, “That is … a beer.”

A sunny day navigating tents of beer and snacks could not have made us happier. Not all the brews were winners, of course, but the vibe alone was more than enough to make up for the duds. Now, I am aware that cost kept many-a-friend from attending with me. Let me assure you: I’d much rather pay $40 for a day spent here, surrounded by easy-going beer-lovers and sober yet excited festival staff than get sweatily manhandled to the beats of four “artists” that sound exactly the same at Extravaganza for free. Yes, that is both a jab at the lack of diversity of ASPB picks as well as a promotion for Pints for the Park. In any case, in this crowd of drinkers both old and freshly legal, we felt welcome and satisfied, wishing only that the vendors had clearer signage to help us hunt down those we hadn’t yet visited. Until next year, Elings Park. I hope we meet again.