The Daily Nexus
Volleyball
Gauchos Remain at T-Dome for the Weekend
October 20, 2016 at 5:00 am by Liam Bailey

The UCSB women’s volleyball team is looking forward to weekend matches against Long Beach State and Cal State Northridge, facing both opponents for the second time this season.
The Gauchos host the 49ers boasting a 12-8 overall record, 3-4 in conference after splitting a pair of Big West games for the second straight week. This season, UCSB has yet to register back-to-back conference wins.

Friday’s contest against LBSU will pit the Gaucho squad against the Big West leading 49ers, who are now the conference’s sole undefeated team at 7-0. 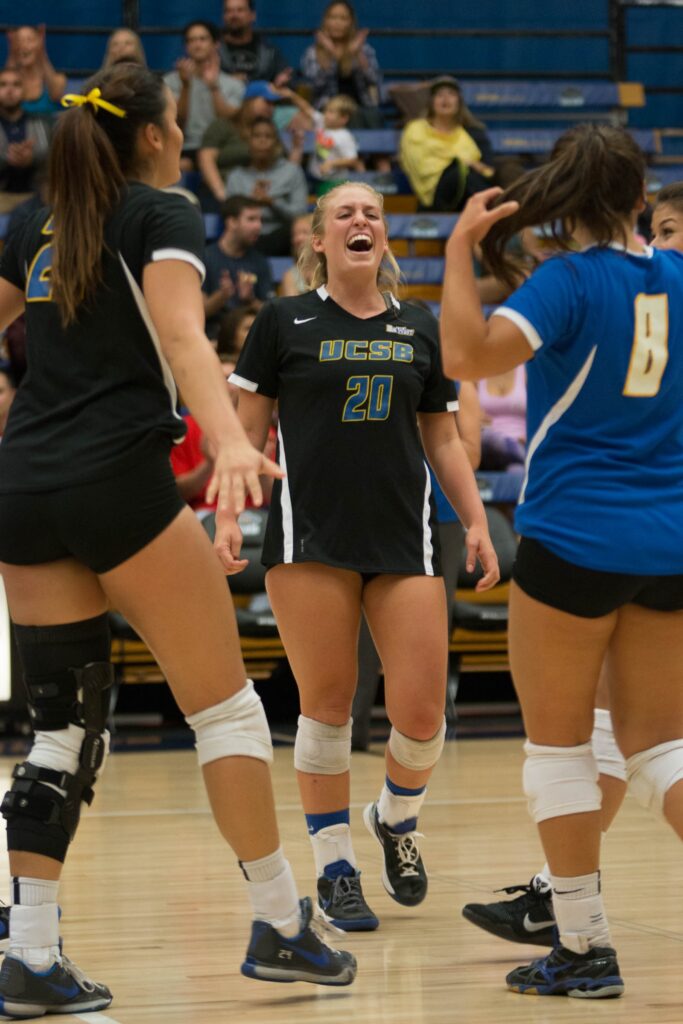 They also come in with an impressive 13-7 overall record after seven matches being below .500.

The last matchup between the two squads stayed close at the start with the Gauchos dropping both opening sets 28-26 and 25-22.

The 49ers would run away with the final set 25-18, however, though a sizable closing run would make what had been a close game a blowout.

So far in conference play this season, LBSU senior outside hitter Nele Barber has been dominating the competition on her way to 4.00 kills per set.

She is one of three players in the Big West to have totaled triple digits in total kills, trailing only Hawaii’s Nikki Taylor.

Though Barber is the cause of most of the team’s overall production, middle blockers YiZhi Xue, a freshman, and junior Ashley Murray rank third and fourth, respectively, in the Big West for hitting percentage, as both have produced at a rate of .375 or higher in conference play.

Redshirt sophomore setter Missy Owens ranks second in Big West conference play with 11.65 assists per set, and she is the engine of what has been a productive LBSU offense to start the season.
On defense, Barber has contributed further to her team’s success, digging 4.62 attacks per set in conference play.

She’s accompanied by first-year defensive specialist and libero Hailey Harward who has averaged 4.42 digs per set in her first crack at Big West competition.

The 49ers will be entering Friday evening on an especially hot streak having beat their top competition in the Big West, Hawaii, two weekends ago three sets to two, and having swept Cal State Northridge in their only match last weekend.

CSUN hasn’t won since UCSB handed the team its first loss of the season on Sept. 30.

Over that span, the team has only come away with three set wins in four matches, including consecutive sweeps at the hands of Hawaii and Long Beach State.

The Matadors sit at sixth in the conference with a 2-4 record, setting up an even match between them and the Gauchos Saturday night.

Sophomore outside hitter Aeryn Owens sets the tone for CSUN’s offense, and her team leading 3.84 kills per set in conference play places her fifth in the league.

She receives a tremendous amount of help from junior setter Lauren Conati, whose 9.59 assists against the Big West also rank fifth in the conference.

Junior libero and defensive specialist Katie Sato has been a menace on defense, and she’ll look to build on her 4.48 digs per set since the conference schedule began.

She’s one of five players averaging over four digs in league play, and will do her best to prevent the Gauchos from finding any easy offensive looks.

Redshirt freshman middle blocker Melissa Eaglin will attempt to do the same from the center of the court, as she is one of five players to average at least a block per set throughout the Big West schedule.
The Gauchos are excited to build off their previous matches with both teams especially their first loss to Long Beach State.

“We played them really close in Long Beach. We were really without Phoebe completely, and Lindsey played just a little bit since it was her first match back after hardly practicing,” Coach Lantagne Welch noted. “Even with the team we had on the floor last time, we felt confident that if we had cleaned up a few things, [the match] would have gone a different way. Now we just have more strength.”

Redshirt sophomore outside hitter Lindsey Ruddins will look to regain her early season magic as she continues to get her feet back under her after an injury derailed her contributions early in the Big West schedule.

Senior middle blocker Phoebe Grunt will also be back after playing in some light action last weekend, and she, too, will hope to reproduce her early season dominance.

The defense, as usual, will be centered around sophomore defensive specialist Emilia Petrachi who continues to lead the Big West in digs per set with 4.72 and total digs with 326.

The libero also earned her second Big West Defensive Player of the Week Honors of the season after registering 49 digs in two matches last week against UC Riverside and Cal State Fullerton.

UCSB will hope to use its home court advantage to its full benefit in hopes of extending its one win over Cal State Fullerton last Saturday into a winning streak.

The longest streak it has put together thus far this season is fives games, which occurred in the earlier portion of its schedule.

When on the losing end of the spectrum, the Gauchos have not tended well, having been swept in six of their eight losses losses this season.

The Gauchos will play Long Beach State at 7 p.m. on Friday, Oct. 21, and Cal State Northridge at 7 p.m. on Saturday, Oct. 22, with both games being played at the Thunderdome.