UCSB women’s volleyball split its two matches this weekend for the third straight time, as they haven’t been able to come away with back-to-back conference wins so far this season.

The match’s first game saw the teams battle back and forth, with Riverside’s highest lead reaching three points and UCSB only ever leading by one. Tied at 23-23, the Highlanders were propelled by kills from junior middle blockers Brooke Callahan and Meg Graham, locking in a first-set win for UCR. 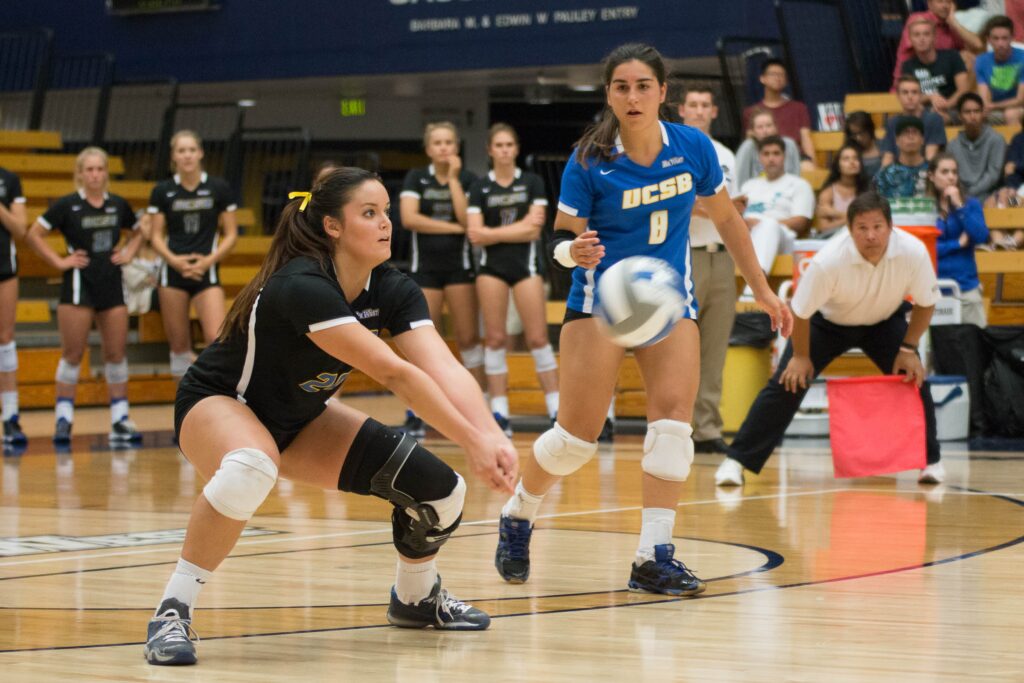 After beginning the second set in decent fashion, a 23-9 Riverside run gave the Highlanders an impenetrable cushion as they raced to a two-set lead.

The Highlanders hit a resounding .435 in the set, while UCSB was only able to muster a measly .034 hitting percentage, combining only eight kills with seven errors.

Errors were a problem for UCSB throughout the evening, as they totaled at least seven for each game, while Riverside stayed under that threshold in all but one set.

Down two sets to none, the Gauchos were able to avoid a three-game sweep, winning 27-25 in the third.

Midway through the set the Gauchos were able to gain a decent lead, 15-11, but a four-point run locked the two teams in a dead heat for the remainder of the game. After trading the lead back and forth, a trio of kills from redshirt freshman outside hitter Lindsey Ruddins and freshman middle blocker Rowan Ennis put the Gauchos up one, 26-25.

A service ace from sophomore setter Annie Hasselmann put the Gauchos over the top and gave them hope down 2-1 in the match.

UCSB wasn’t able to carry the momentum to the next set, however, as they turned in their second-worst performance of the match, hitting .094 with eight errors.

A five-point run started the set for UCR, with a stream of errors putting them in an early hole. Redshirt freshman setter Hannah Juley began with a service error, followed by an attack error from Rowan Ennis and a bad set, again from Juley.

After a pair of kills from sophomore setter Chelsea Doyle and freshman outside hitter Mickayla Sherman, a UCR lead of five would set the tone for the remainder of the match.

UCSB would battle back to a 13-13 tie, but a 5-1 Highlander run would push the lead to 18-14, as they would maintain their distance from the Gauchos and capture the win.

Freshman outside hitter Mickayla Sherman dominated the match Friday evening, scoring 28.5 points — more than double any UCSB player — and totaling a jaw-dropping 26 kills on 50 attacks. She was also one of four players to achieve at least 11 digs and added three block assists for good measure.

Sophomore setter Chelsea Doyle kept things moving for the Highlanders. Her 45 assists were a match high, and she now stands at sixth in Big West conference play with 9.5 assists per set.

Lindsey Ruddins was productive for the Gauchos, totaling 13 kills and 11 digs, though her efficiency was subpar, with only a .174 hitting percentage.

Matters weren’t much better for junior outside hitter Chanel Hoffman, who, despite nine kills, 14 digs and two service aces, finished with a kill percentage of .086 on a night when her team couldn’t solve its opponent.

The first set started extremely rocky for the Gauchos as they quickly found themselves in a deep 6-0 hole. The run included three kills from sophomore outside hitter Shimen Fayad, and all three were assisted by first-year setter Rachel Hall.

UCSB was able to slowly battle its way back, though, and a 9-2 stretch took the Gauchos from a four-point deficit to a 22-20 lead. Despite a short run from the Titans, UCSB was able to close the set, taking a 1-0 lead in the match.

Again the Titans began the next set with an eye-popping run, starting the game 5-0 on kills by sophomore middle blocker Summer Kerins and Fayad, as well as a service ace and a bad set by UCSB’s Hannah Juley.

The match’s next point, a kill by UCSB freshman outside hitter Megan Rice, was the last time the Gauchos would be within four points of Cal State Fullerton for the entire second set.

The Gauchos were finally able to prevent a long Cal State run to start the third set, as the two teams stayed within two points of one another until a Devin Joos (sophomore outside hitter) kill on an assist from Hannah Juley gave UCSB a 20-17 lead.

Joos’ attack came in the midst of an eight-point run for the Gauchos that essentially clinched the third set of the evening.

UCSB and CSF were again closely matched in the final set, but a steady effort proved to be the deciding factor for the Gauchos.

After going down 2-3 early in the set, the Gauchos wouldn’t trail again as they held the Titans to a .091 hitting percentage, slightly above their dismal percentage of .019 in the previous game.

Emilia Petrachi had a season-high 29 digs, continuing her campaign as the league’s top defensive player. She received her second Big West Defensive Player of the Week award, and has been the centerpiece of a consistently feisty Gaucho defense.

Hannah Juley reached 50 assists in the match, as she too continues to maintain her team’s flow on offense and put her teammates where they need to be.

The Gauchos didn’t dominate their opponents despite playing the two weakest Big West teams, but several solid signs shined through. They continue to play good defense with Petrachi leading the way, and UCSB always receives offensive contributions from the top to the bottom of the roster. Senior middle blocker Phoebe Grunt was also able to play some in the third set, an encouraging sign after missing the previous several matches due to injury.

This UCSB team has many impressive pieces; it’s just a matter of those pieces coming together to create a greater sum than they have so far this season.

UCSB will next host Long Beach State on Friday, Oct. 21 and Cal State Northridge on Saturday, Oct. 22. Both Games will be at the UCSB Thunderdome.