A UC Santa Barbara soccer player was arrested on Oct. 4 after almost backing into a campus parking officer with his vehicle, according to the UCSB Police Department. 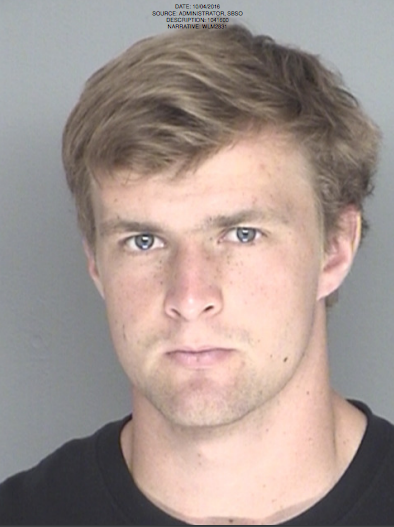 Sam Strong, a second-year student, was exiting a Transportation and Parking Services trailer at approximately 9 a.m. when he saw parking officers placing a wheel clamp on his car in Lot 25.

According to UCPD Sergeant Rob Romero, Strong then quickly got into his vehicle and attempted to drive away, almost backing into a parking officer who was placing the clamp on his rear wheel.

Strong was later located on campus and arrested on charges of assault with a deadly weapon and reckless driving, and booked into Santa Barbara County Jail.

Strong has been released from jail pending trial, but Deputy Athletics Director Tom Hastings said he has been suspended from all athletic competition since his arrest.

The Office of Judicial Affairs will oversee further investigation.

Honestly we need to really look at the ridiculous prices of TPS. Fuck them. No assistance is offered, shit happens and some people don’t have money to pay so much. I understand that more than one shouldn’t happen but it’s for some of the dumbest things that they give tickets

Yeah simple rules and regulations are too hard and complex for me to understand. I cant figure out where to park they should have valet parking on campus so i do not have to even think about it