An entire pipe system like the one pictured above is capable of being replicated in the commercial version of AFT Fathom. As students never work with complex systems like this, the student version of the software models up to 12 pipes. Courtesy of aft.com

A computer software program that is used in engineering industries is now available to students attending U.S. universities for the price of $10 a year.

The software, known as AFT Fathom, is a fluid, dynamic simulation software that engineers use to calculate pressure drop and flow distribution in liquid and low velocity gas piping and ducting systems.

As systems in industries contain hundreds and thousands of pipes, AFT Fathom is useful when it comes to pipe sizing, pump sizing and selection, simulation system operation and component interaction and troubleshooting existing systems to determining the cause of operational problems.

A simplified version of AFT Fathom, known as AFT Fathom Students, uses similar models to promote and improve the understanding of the fundamentals of pipe flow as students majoring in mechanical engineering are exposed to fluid mechanics and heat transfer in systems in their third year.

As the aerospace industry was declining in California, Walters left this industry after five years and went into the power industry. In 1992, he moved to Ohio and began working as a research engineer for Babcock & Wilcox, a power generation company.

While working at Babcock & Wilcox, Walters had an idea for a software that eventually turned into the AFT Fathom.

“[The idea for a software] came about in 1992, but I actually first experienced graphical user interface on a Macintosh at the UCSB bookstore as an undergraduate. It was on an Apple computer and I saw a mouse for the first time,” Walters said.

As a rocket engineer, Walters became comfortable using Macintosh computers, but relocating to Ohio and working as an engineer was difficult due to the lack of resources that are available today, such as program simulations and calculations.

“At the time, there wasn’t a whole lot of engineering programs to do calculations that really managed to graph or had graphics,” Walters said. “Like if you wanted to buy software, like what we do today, to do calculations, it was very ugly looking software that was all text based. There was no drag and drop or pull and click. You had to do the diagrams separately.” 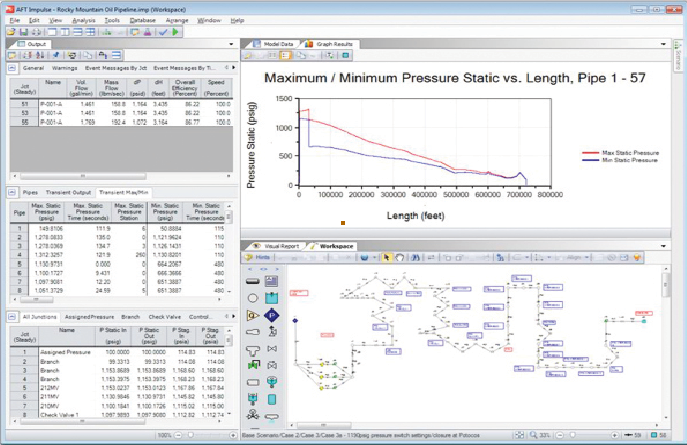 In addition to AFT Fathom and AFT Fathom Student, AFT has other software for sale. Each software has its specific purpose, but all of them have similar features. In the picture above, the workspace for AFT Impulse is shown. Courtesy of aft.com

After being exposed to a software Microsoft developed, the first thing he thought of was how the software would benefit someone who needed to do pipe flow calculations.

Walters researched this idea and found that no one else had made a program to do what he wanted, so he decided to invent the software that would do the necessary calculations. Initially, he did not have the intention to start a company with his software. Working and developing his software was a hobby to him.

“I taught myself the program Visual BASIC and then, in September of 1993, the company I was working at had lost a contract and interesting work dried up. So, I decided to take my hobby and give it a name, called it Fathom, and start a company, which is Applied Flow Technology,” Walters said.

Walters started this company with the idea of being a pioneer in software for pipe flow calculations on Windows. Their first location was in the basement of Walter’s home.

“All good companies start in a basement or garage. We actually ran the company for three years in the basement of my house. In 1996, we moved to Colorado and have been there ever since,” Walters said.

“It’s common to see dozens or hundreds of pipes in commercial models, but in the student version, you can model up to 12 pipes, and there’s just a number of things that just aren’t useful to students,” Walters said.

One such feature was including a jet pump. According to Walters, most undergraduates do not work with them until they start working in industry, so Walters and his team removed items that would not help the student in their studies.

Another feature was removed was the “scenario manager,” which takes a look into different possibilities, such as if valves were closed, some pipes were removed and what the weather is like.

Students who are seeing fluid mechanics and heat transfer for the first time usually do problems in ideal conditions, so having different possibilities seemed like a feature that was not needed.

What also makes this program student-friendly is the cost. Generally, programs for engineering courses can go over $100; however, for a one year license, the AFT Fathom is $10.

“We’re trying to not make money on it,” Walters said. “At first we were going to do it for free. The idea wasn’t to make money but to expose students to the type of tools we have. We want them to get to know us as a company and to get them comfortable using tools they might use in industry.”

Walters may have graduated 30 years ago, but he still has the “Gauchoback” spirit and words of advice for engineering undergraduates: “Make sure you work in something that interests you. The full saying is that if you’re passionate about your job then you’ll never work a day in your life.”