The Daily Nexus
Artsweek
IASB & Dhadkan Celebrate Navratri with Dance
October 13, 2016 at 10:06 am by Isaac Mikulski 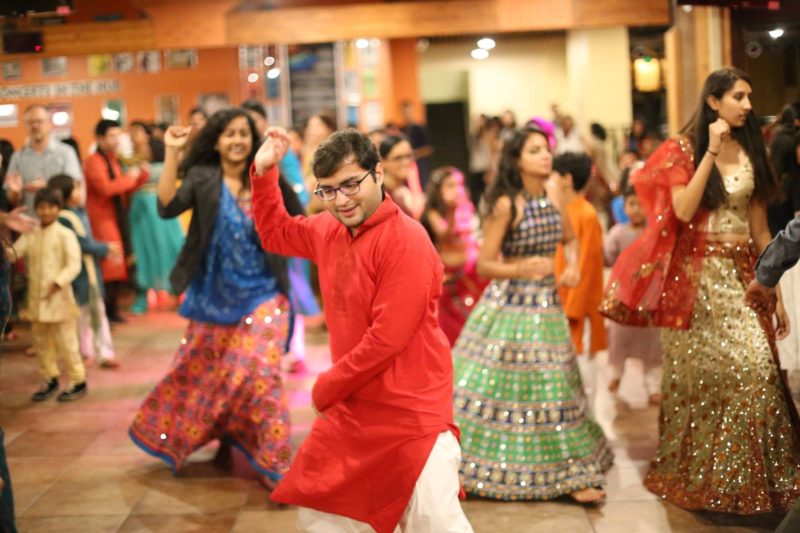 Traditional Indian music, synchronized dancing and the clinking of wooden instruments filled the Hub last Saturday night. This event was a celebration of an Indian festival known as Navratri hosted by the India Association of Santa Barbara, a graduate student organization. The night began with an invocation followed by the provision of tasty traditional foods such as samosas and fried rice. During this time, children from the community danced while the adult patrons ate. The remainder of the event was devoted to the dance styles known as Garba and Dandiya and the final portion consisted of dancing to popular Bollywood music.

Garba is an Indian dance form that is used to celebrate Navratri in the western portion of India and was the first style at Saturday’s event. For this dance, a fair portion of the crowd assembled in a circle and slowly rotated about the middle of the dance floor. Dancers moved by stepping forward and to the right and then forward and to the left; with each cycle of steps, they gradually moved to the right, causing the rotation of the circle. Moving within the circle were other attendees who danced more freely. Later on, the stepping was replaced with regular arm swaying toward the center of the circle before the Garba style transitioned into Dandiya.

Dandiya is also a style of dance that is used to celebrate Navratri, but unlike Garba, it is practiced in the northern part of India. For this portion of the event, participants were given two wooden dowels, as they are an integral constituent of the dance. For Dandiya, people formed two concentric circles, with those making up the outer circle facing those of the inner one. The outer circle rotated around the inner circle, while each individual person clicked sticks with the person opposite them. They clicked the two sticks with one another individually and then clicked them a third time before moving on to the next participant. This energetically continued in time with the Dandiya music until giving way to the still more lively Bollywood songs.

In the final portion of the event, people danced enthusiastically in large and small rings, as well as in separate groups. The popularity of the pulsating music was evident, as people sang along, swayed and moved about.

The festival of Navratri originates from a mythological story in which a powerful demon is fought by guards over the course of nine days. The demon is finally defeated on the ninth evening. This victory is one of good over evil, which is the predominant concept in the myth. The celebration is one of the largest in India and customarily occurs over the course of nine days, like the nine-day battle. Neighbors assemble every evening to dance communally to traditional music and arrive dressed for the occasion, as was the case at the Hub. Regarding the festival in general and its recreation here at UCSB, India Association of Santa Barbara President Puneeth Chakravarthula noted, “It’s a way of socializing with the community and also celebrating this festival.” The India Association of Santa Barbara hosts three other major events including Diwali on Nov. 12. Indeed, Saturday’s celebration was a lively experience for all participants.

Regarding his organization, Chakravarthula said, “We are … trying to create that kind of symbiosis between these two groups, you know: the ones who want to learn about [Indian culture] and the ones who want to … connect with their roots.” That goal was deeply felt at the event; it was very enjoyable, both to those long familiar with Navratri and those who were just discovering it.