The Daily Nexus
Sports
Crunch Time For UCSB as it Hopes to Avenge Loss
October 13, 2016 at 5:03 am by Antonia Bird

Starting this Thursday, the UCSB women’s soccer team will face two challenging tests in the Big West Conference, preparing for games that could either make or break its season. The Gauchos will enter their matchups 10-2-1 overall, 1-1 in conference play which currently has them tied for sixth-place with UC Davis in the league standings. 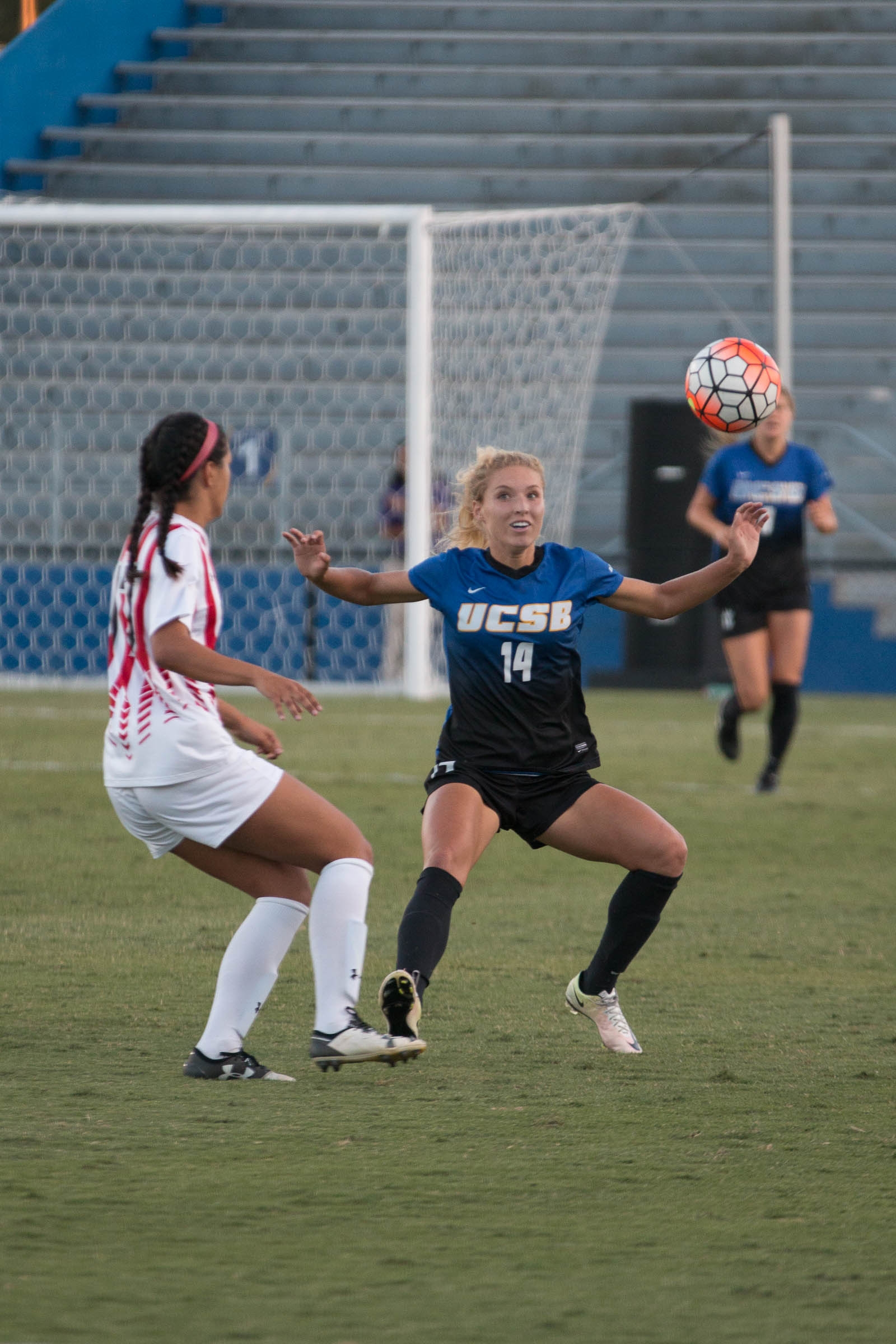 This weekend’s series will start with one of the most anticipated games of the season: UCSB vs Cal Poly. The Gauchos will then finish with a game against Cal State Fullerton on Sunday.

Despite coming off a loss, UCSB remains confident in its preparation and will not change much in its game plan.

“Cal Poly and Northridge play similar systems and styles,” Head Coach Paul Stumpf said. “We will make only a couple adjustments, and just try to do what we do better. Giving up only one goal is a pretty good defensive performance, but I think we could have been a little clearer with our touches on the ball, made a few better decisions with the ball,” he added.

The Gauchos will look to alter recent history when facing their Central Coast rival on Thursday considering that in the last five years, the Gauchos have only defeated the Mustangs twice.

Last season, UCSB dominated Cal Poly at home, shutting out the Mustangs 4-0. This year, the Gauchos will have to face them on the road which could be a difference maker as dealing with the atmosphere of the Blue-Green rivalry is always a challenge in itself.

The Gauchos have played 13 games so far this season and have scored a total of 25 goals off of 166 shots. In addition, UCSB has accumulated 24 assists, 92 corner kicks and seven shutouts.

A large contributor on assists has been sophomore midfielder Maddie Gibson with five. Gibson has also netted two goals on the year. Overall, the sophomore is a versatile player who makes a strong presence on the field for the Gauchos.

Complementing UCSB’s offense as well is sophomore midfielder Sydney Magnin who has started every game so far this season, taking a total of 15 shots. While Magnin has only scored one goal and has two assists, she does a consistent job of applying pressure which makes a difference in breaking down an opponent’s defense.

Other key players for the Gauchos who have provided consistency over the course of the season are junior forward Amanda Ball who leads the team with nine goals, sophomore midfielder Mallory Hromatko who has four, and freshman forward Shaelan Murison who also has four.

The Blue-Green rivalry has become one of the most attended games for both men and women’s soccer, not only because of their close proximity to each other, but also due to the level of competitiveness seen throughout each match.

The Mustangs come into Thursday’s game ranked just below the Gauchos in the conference standings with an overall record of 6-8-1 and a conference record of 1-3.

Cal Poly has scored a total of 16 goals this season off of 151 shots. The Mustangs have also put together 78 corner kicks and three shutout wins.

A standout player on the Mustang roster is sophomore forward Caitlyn Kreutz. She leads the team in both goals and assists with four and three respectively. Kreutz earned All-Big West Freshman Team honors last year after scoring a team high seven goals.

Adding to the Mustang attack up front are freshman forward Jessica Johnson and sophomore midfielder Stephanie Magellen. Both players each have a pair of goals and assists. Johnson plays slightly more of an attacking role with 17 shots fired over the course of the season. Magellen has a total of 13.

Following Thursday’s rivalry game, the Gauchos will take on the top seed in the conference, Cal State Fullerton. The Titans come into Sunday’s match with a 6-8 overall record and a 3-1 conference record.

Over the season the Titans have scored a total of 15 goals off of 141 shots and have accumulated 62 corner kicks. They’ve finished with two shutout wins.

The Titans have three junior forwards who have contributed three goals each this season, and pace the Fullerton attack.  Tala Haddad leads the team with three assists and 11 shots on goal. She has made a big improvement since her sophomore year when she was a key substitute for the Titans.

Sarah Fajnor has assisted on two goals this season and has taken a total of five shots on goal. Maribell Morales, the third link, has yet to assist on a goal but has scored two game winning goals so far this season.

While the Gauchos have two very competitive games coming up, there is no doubt that they will be prepared physically and mentally.

“I think we happen to have a pretty quality group of young women in our program,” Stumpf said. “They are not only good soccer players, but they are good people.  They are committed to our process, and have been consistent performers all year long.”

The Gauchos will take on the Cal Poly Mustangs Thursday, Oct. 13, 7 p.m. at Alex G. Spanos Stadium. They then will host the Cal State Fullerton Titans on Sunday, Oct. 16, at 2 p.m. at Harder Stadium.