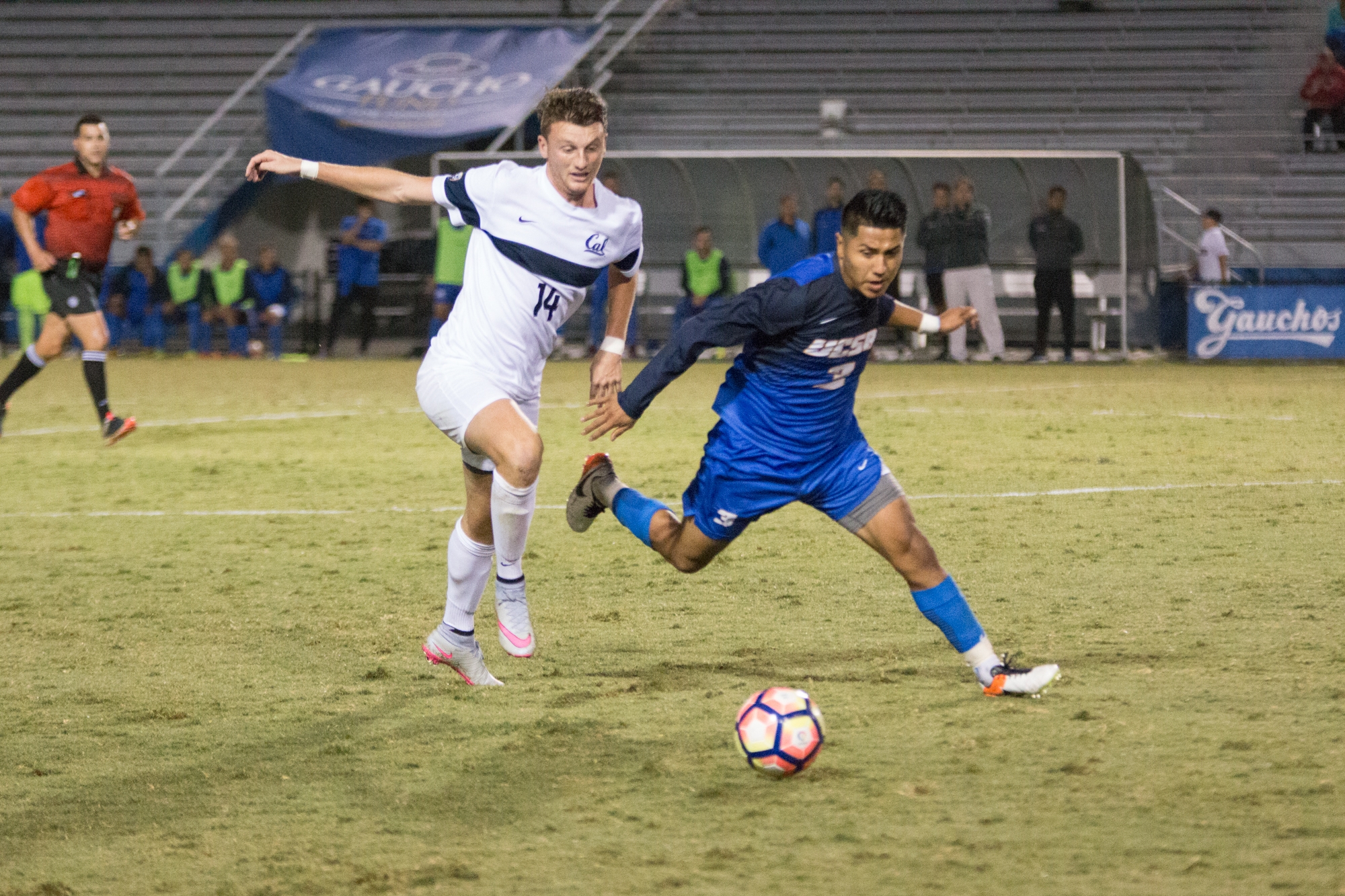 In the clash of the two Big West division leaders, the UCSB men’s soccer team topped South-leaders CSUN at Harder Stadium to remain undefeated in conference play. The Gauchos’ two early goals from junior wingers Dalton Pando and Ahinga Selemani were the difference in the last game of inter-division play as the hosts sent the Matadors home with a 2-1 loss.

With the win, Santa Barbara improves to 7-5-1 overall on the season and, more importantly, 3-0-1 in the Big West atop the North division. They are now on a four-game unbeaten streak, tying their longest of the year. Northridge now sits at 5-3-2 overall, 2-1-1 in conference play.“I think we’ve gotta keep the team spirits high,” said Pando of the team’s recent success. “Everybody’s just working as hard as they can, but we have to keep this going and play every game like it’s our last now that our division is starting.”

“I think we’ve gotta keep the team spirits high,” said Pando of the team’s recent success. “Everybody’s just working as hard as they can, but we have to keep this going and play every game like it’s our last now that our division is starting.”

The Gauchos got out to a great start, creating several chances in the opening five minutes, and their persistence was rewarded in the seventh minute when Pando found the opener. The play started when freshman winger Noah Billingsley turned his man and ran down the left wing and, after a couple short passes, sent a curling cross to the back post, where the junior was there to meet it with a soft, right-footed volley across the keeper.

With the linkup, the two UCSB wingers both brought their personal tallies on the season to two assists and two goals apiece. Billingsley and Pando have both been receiving more playing time in the last few matches, and their goal was a fitting end to the means. The latter’s performance was brimming with confidence after the goal, as he led the team in shots with six and had a number of take-on up and down the wing.

Santa Barbara doubled its lead in the 20th minute from an equally impressive bit of play from yet another freshman. This time, it was defender Lamar Batista, who won the Gauchos the ball with an intelligent interception. Right after controlling the ball, Bautista launched Selemani through with a defense-splitting, 40-yard pass from deep in his own half. Selemani ran in behind, rounding the keeper with a classy touch and finishing the tap-in for his fourth goal of the year.

At that point it looked like UCSB would cruise to their third straight win, but the Matadors recovered a goal when a Gaucho clearance bounced off the back of a Northridge forward straight onto Edwin Quiroz’s foot by the penalty spot, and he finished off the gifted chance to bring the deficit to 2-1 before the break.

At halftime, the ‘Chos led CSUN 7-2 in shots as they held firm control of the game, with the visitors’ only other shot of the first half a 25-yard shot that was skied over the crossbar. UCSB ended the game outshooting Northridge 18-8 as the hosts’ defense allowed no more than one goal in the third straight match.

“We’ve been working a lot in training on our defensive shape and how we pressure as a team, and I’d say that’s a big reason for the improvements in the back,” said Pando.

The second half was a little less eventful, with Northridge only mustering three shots while Santa Barbara seemed content with the result as it tidied up in the back to retain the victory over one of its biggest threats to a Big West title run.

Conference play continues Wednesday as the Gauchos close out their three-game home stand with a date with Sac State, which for Pando means a good chance to prove himself in front of familiar faces.

“I’m really excited; I’ve played with a lot of the guys on Sac State, so it’s kind of a rivalry game for me because it’s my hometown,” said Pando. “Those are a lot of the guys I grew up playing with, so I can’t wait to get after it.”

Next up for the Gauchos is the first game of North division play, in which they will host Sac State on Wednesday at Harder Stadium at 7:05 p.m. A video stream will be available on the ucsbgauchos.com website. Follow @thenexus_sports for all things Gaucho soccer.