The Daily Nexus
News
Seeds Sown for Sueno Orchard
October 6, 2016 at 5:00 am by Persi Zamani

After three years of deliberation, the IVRPD will start drafting proposals to fund an irrigation system while restoration of the plot is underway 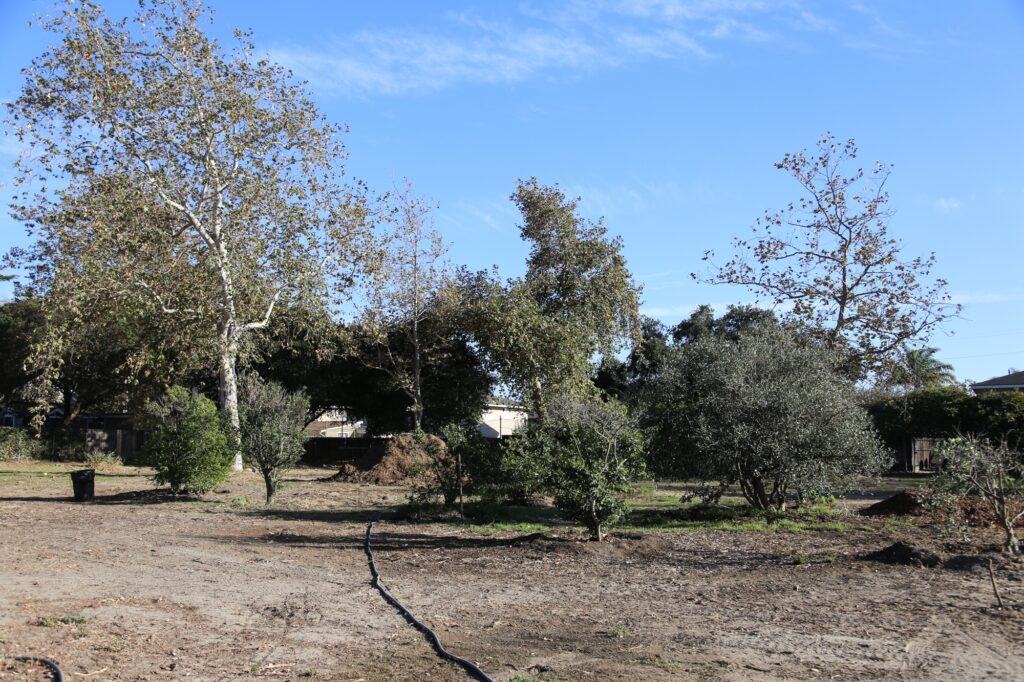 The Orchard suffered through neglect, drought and disc golf assault before the decision was made to restore it. The project will aid the existing trees as well as plant 30 more. Jenny Luo / Daily Nexus

The UCSB Edible Campus Program will begin the restoration of the overgrown Sueno Orchard with a group of volunteers on Oct. 16.

The Sueno Orchard, a project that developed in the 1980s, lives on 6723 Sueno Road and used to house a vast array of different fruit trees, from guava to mulberry, some of which are still present in the orchard today.

According to Rodney Gould, Isla Vista Recreation & Parks District (IVRPD) general manager, the group has been mulling over the project for the past three years, as community voices clamored for restoration of the orchard each year.

The feat was delayed due to insufficient funds, Gould said, and residents redirected their efforts to other community projects following the May 2014 Isla Vista shooting.

Now, the process seems to be on the path to fruition as IVRPD drafts proposals for the reinstallation of a drip irrigation system, the planting of new trees and care of existing trees.

“We’re fulfilling a vision that has been requested for a few years here,” Gould said. He said recent community input indicated that the restoration process was still a pertinent issue for the residents of I.V.

According to Gould, the orchard has fallen into disarray over the years.

The Isla Vista Peace Course, a professional disc golf association, has two holes on orchard grounds, and flying disc sports have caused damage to some of the trees’ trunks.

Additionally, the removal of the drip irrigation system and a statewide drought have also contributed to a number of the fruit trees’ untimely deaths.

Gould emphasized the main goals of the restoration effort: to put in drip irrigation and to plant 30 new trees while saving the eight healthy trees that are already on the orchard grounds.

Currently, there are mulberry, citrus, apple and guava trees on the grounds of the orchard, and the project will plant more of those trees and other native species.

Gould said IVRPD is drafting grant proposals and looking for student groups that will help provide funds. IVRPD will also be looking for volunteers to help on their initial cleanup day.

Additional aid will come from the Santa Barbara Public Works Department in the form of fruit tree donations. Recently, the Southern California Edison Electric Company removed a few trees from different parcels along the road during road work.

Afterward, the Public Works Department contacted Gould and inquired whether they could plant trees in other I.V. parks as mitigation for the removed trees.

Gould instead asked for fruit trees for the burgeoning orchard. The Public Works Department will now give IVRPD between five to seven trees in exchange, he said.

According to Gould, the UCSB Sustainability Program has been instrumental in raising campus and community awareness, and program coordinator Katie Maynard will be providing volunteers for the Oct. 16 cleanup day.

The volunteers will be doing light trimming of the existing trees and will help build wells around those trees so that they don’t retain water while they are being watered.

After the cleanup day, the process will continue with the installation of the irrigation system and the planting of the new trees. Gould said organizers hope to install irrigation prior to the middle of November and to install trees by late November.

“People definitely utilize what’s there; people who have graduated also come back to Isla Vista and harvest the fruit,” Gould said.

A version of this story appeared on p.4 of the Thursday, October 6, 2016 print edition of the Daily Nexus.

This is awesome! Fruit-galore 😍😍 Go Persi!