The Daily Nexus
Swim and Dive
Aquatic Legend Gregg Wilson Retires After 40 Years
October 6, 2016 at 5:10 am by Sean White 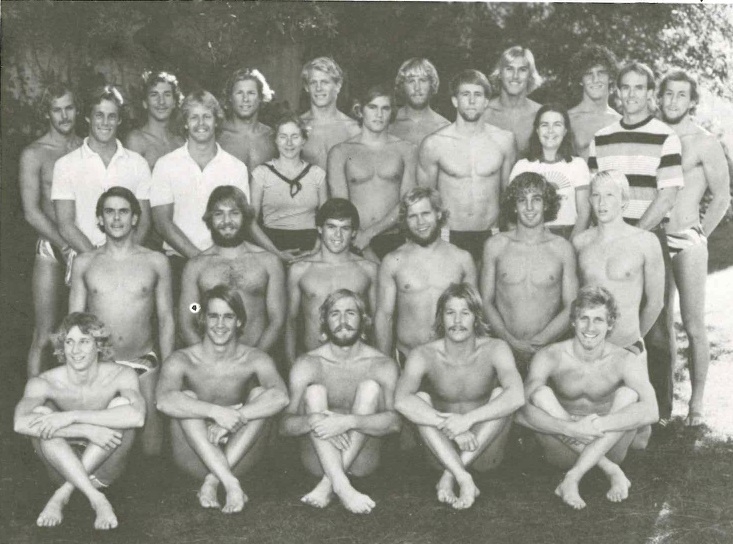 UCSB’s head coach of the swim team, Gregg Wilson, stands with his 1979 team. Wilson began his 40-year-long career in 1976, so the ‘79 team was one of the first to experience his coaching. expertise. La Cumbre Archives, 1979

There is no limitation that can be placed upon the perpetual influence coaches can have on their athletes. They serve as the indisputable influence to a core of individuals, providing them with the necessary guidance, knowledge, and challenges that help cultivate principles of life that exceed the competition of sports.

A total of 427 individuals were fortunate enough to encounter the leadership and commitment of former UCSB swim Head Coach Gregg Wilson over the course of his 40-year coaching career.

As of July 1, 2016, Wilson officially retired, making his last coaching appearance at the 2016 U.S. Olympic Trials. In his final meet as the Gauchos’ Head Coach, UCSB swept longtime rival Cal Poly. Despite no longer being at the helm of UCSB’s swimming program, he remains a vital asset to its subsistence as a voluntary coach and is willing to help aid new Head Coach Matt Macedo.

Wilson’s introduction to UCSB begins with him joining its men’s swimming program in the 1975-76 season. In the 1983-84 season, however, Wilson simply needed a break from his coaching duties of 80-hour work weeks and returned to his alma mater Cal and became the program’s aquatic director.

Despite returning to his former university, there was a void within Wilson, and his love for the game eventually drew him back to UCSB. However, his return to the pool deck would eventually change with an increase in duties.

“What I realized was I missed the stimulation of the student-athlete, the challenges that presented themselves here [at UCSB],” Wilson said. “They decided during my absence to merge the men’s and women’s teams. They invited me back [as the] aquatic director [and] head coach and that started the programs together. It exceeded my expectations; I had to learn a lot. I went down to working 60-70 hours a week and everything really took off. It was an experiment for the department. It worked so well that they merged the men’s and women’s track programs and that was right at the beginning of a lot of programs across the country merging men and women together.” 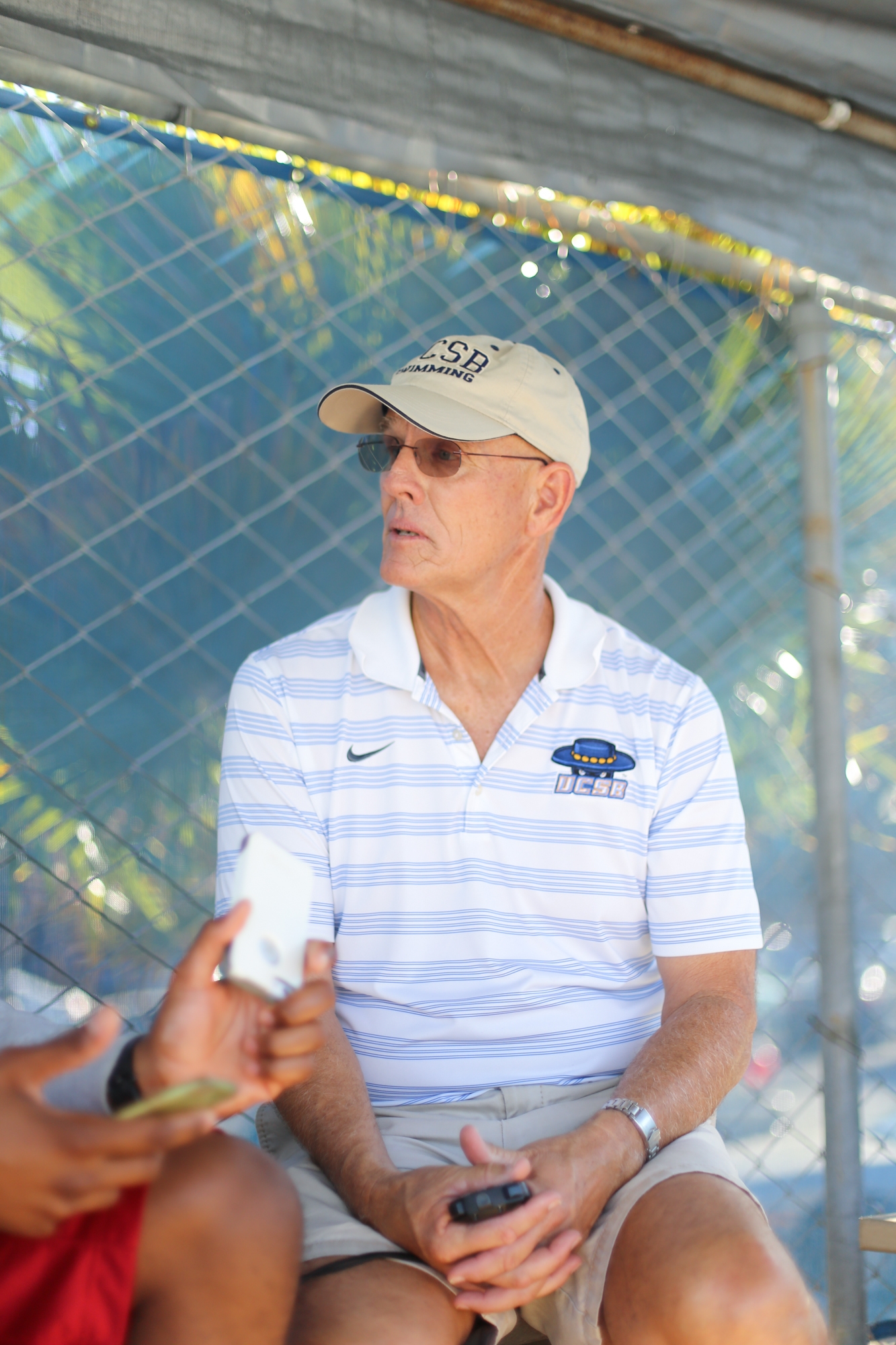 The merge of both the men’s and women’s programs marked Wilson’s return to UCSB for the 1985-86 season. From that point on, he became the pioneer of a new and improved culture at UCSB that fostered a generational growth for the next 40 years.

A mastermind of the complexities within swim, the veteran coach accumulated a myriad of accolades that comfortably rank atop the Gaucho record book.

Wilson retired with a total of 36 Big West titles and was appreciated for his prominence within the conference, winning 27 Big West Coach of the Year awards in addition to earning two Mountain Pacific Sports Federation (MPSF) Coach of the Year honors.

Defined by longevity, it is surprising that he initially was signed on a short-term contract for five years, but the terms were eventually eliminated.

The extension of Wilson’s time at UCSB may serve as one of the program’s most beneficial decisions, as his guidance helped enhance the skills of various talented swimmers. Throughout Wilson’s tenure, approximately 72 swimmers were rewarded with All-American status. Most notably, his prevalence in national competition ascended as well, as he coached three Olympians, including former Gauchos and Team USA gold medalists Richard Schroeder and Jason Lezak.

Although the extensive list of milestones were well-deserved achievements, Wilson’s never allowed his reputable coaching status to outshine the true importance of maintaining a commitment to his student-athletes.

“We don’t have a lot of scholarship money, so I set the goal of [seeing] what I could do with raw material,” Wilson explained. “[My mindset was] come here for very little or nothing and let’s see what we can do. Probably the best example of that are the two gold medal winners that we have.”

Schroeder walked on to the UCSB swim program out of the junior college ranks and worked his way into representing the United States at the 1984 Summer Olympics, excelling and earning gold. Following Schroeder nearly two decades later was Lezak, who Wilson explained was a good swimmer coming out of high school but reached his pinnacle at the collegiate level, becoming an All-American and eventual gold medalist as well.

Ignoring the fact that UCSB may not have ever been considered an elite swimming program, Wilson’s commitment to teaching student-athletes the true craft of swim fueled his long-term stay in Santa Barbara.

Most importantly, those student-athletes appreciated this passion, as his lasting impression remains evident.

“He represented a great legacy for 40 years,” senior Meghan Bicomong said. “Gregg’s really personal with the Gaucho family. Everyone is connected together [which helped] build team comradery and that really hits home for me because he’s super personal and that’s what kind of helped me to get into this school and helped me decide on going here.”

Certainly, Wilson possessed a competitive edge when coaching, but it was his hospitable nature that provided a sense of balance that attracted the likes of so many players.

“I played water polo for the most of my life so I didn’t think I was going to be much of a swimmer,” senior Matt Drum explained. “My high school season ended, then I got this call from Gregg and he’s like, ‘Hey, do you want to come swim at UC Santa Barbara?’ I didn’t do so well my last year [of high school] but Gregg somehow still believed in me to come here, so I owe him a lot for that.”

Well-deserving of his recognition for the mark he has left on the UCSB campus and swimming program, Wilson’s efforts expand to the Santa Barbara community as a whole with the establishment of Wilson Swimming. The community swimming program offers swimming camps and lessons here at Campus Pool.

While Wilson’s impact will remain unmatched, UCSB has shown great appreciation for the former coach with the creation of the Gregg and Carol Wilson Swimming Enhancement Fund. The fund will aid and support the swimming program’s operational budget.

In the meantime, Gregg Wilson’s retirement party will take place this Saturday, Oct. 8 from 5:30 p.m. to 6:30 p.m. in Corwin Pavilion. The event is nearly sold out, but happy hour tickets, priced at $50 each — in which all proceeds will benefit the Gregg and Carol Wilson Swimming Enhancement Fund — can be purchased online on the homepage of ucsbgauchos.com.