The Daily Nexus
Opinion
Not Just Another Kaepernick Article: A Call for Greater Understanding
October 6, 2016 at 5:00 am by Jackson Kerr 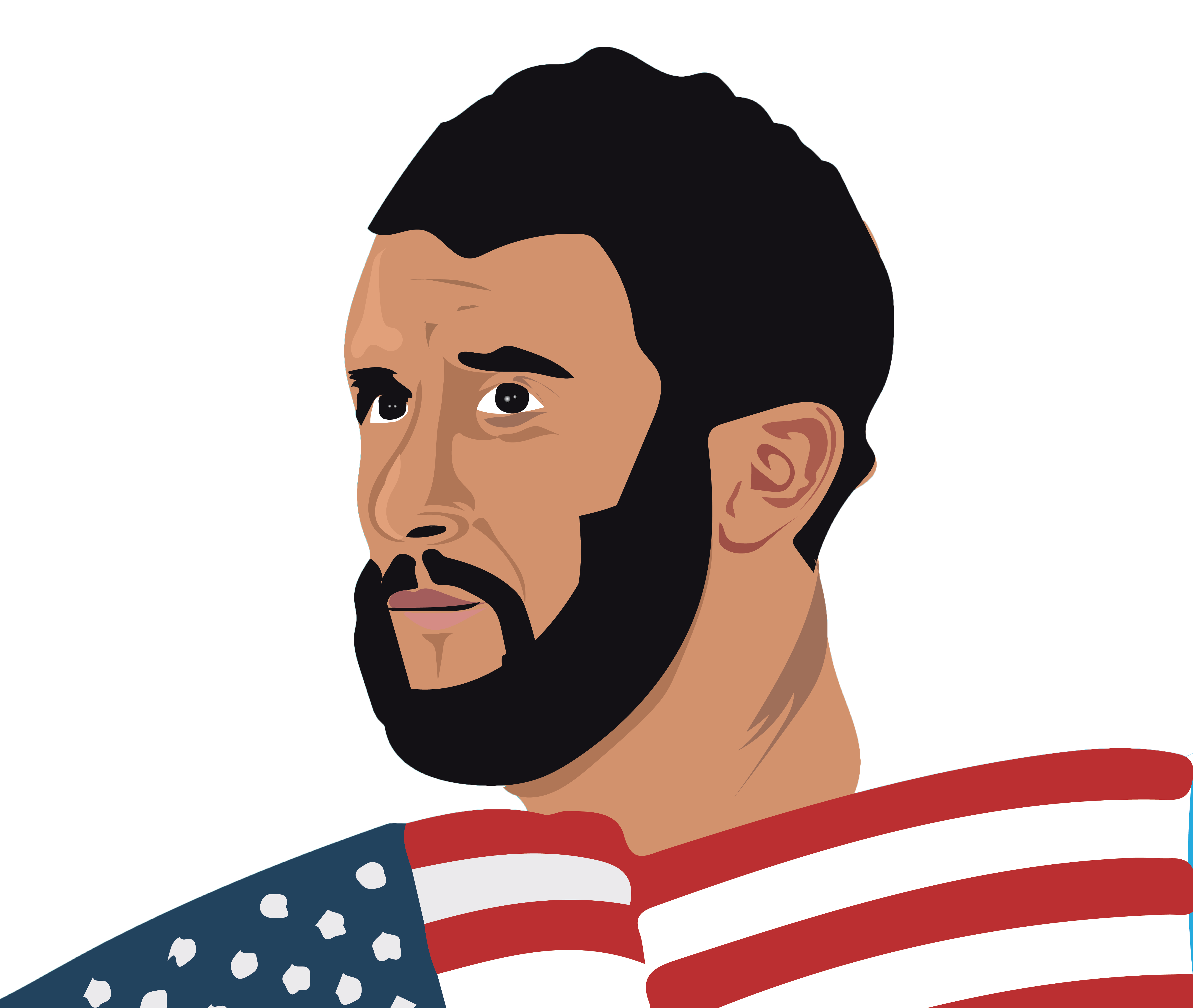 I didn’t like Colin Kaepernick when he got the starting job for the 49ers. I was an Alex Smith guy all the way. I loved that he wore a Giants hat during press conferences, and I loved that he was finally having a really nice season after being dogged by the fact that the Niners could have drafted Aaron Rodgers instead.

My guy, Alex Smith, lost his job after suffering a concussion in 2012. Just like that, the Niners had a new QB. Even though Kaepernick is from a city within spitting distance of my hometown, it still took a few stunning sprints and thrilling victories to come to terms with the athletic QB from Turlock. But as any real fan would, I came around. That was in 2012. Fast forward four tough years as a Niner fan and my sports opinion about a guy who was at once poised to change the game is the last thing anyone wants to hear or talk about. He indeed changed the game, but not in any way audiences believed he would back in 2013 when he almost won a Super Bowl.

Agree with it or not, Kaepernick has started a movement across professional sports. This is a movement that will be talked about for decades. It is a turning point in American sports history and American history in general; dozens of professional athletes are making use of their platform as household names to make a damn important point to the roughly 200 million Americans who tune in to watch their sport each week. I have no criticism for these protests; my only vexation is that it took major sports figures to point out the obscene problem millions of black Americans have been struggling with for decades. To the detractors of the athletes sitting, kneeling or raising fists during the playing of our national anthem to protest police brutality: Those players so many of us religiously watch play a grueling game week in and week out — with so much adoration that our friends and family create fantasy leagues to get closer to the action — those players are finally making you think, and you hate it.

It is clear that there is anger on both sides of this argument, but what matters far more than any amount of frustration is the fact that our privilege as white people allows us to get angry rather than afraid.

Our country is flawed on different levels. Ask any sports fan and they’ll likely tell you they watch *insert favorite sport* because, at least for those few hours, they can forget about the issues facing them personally and the larger issues of the time. So it should be a major wakeup call that these people, whose career it is to create such a satisfying escape for us, are disrupting the status quo to make a point. It would be far easier to play football, collect millions and shut out all of the ugliness plaguing our country that doesn’t take place inside a stadium. These men and women are not taking the easy route for a very real reason; they are using their platform to further a message that needs hearing. And their protest has been met with a disturbing and profound lack of understanding to the point of vitriol.

I have seen everything from former fans torching Kaepernick’s jersey and sharing the act online to make a point, to people literally telling Kaepernick to shove a flagpole up his ass. Some people just love attention online, so much so that they’d rather ignore the reason for the protests and parade around as a “patriot” defending our veterans because, “Oh, how dare that football man sit during our country’s song,” the song written by a slave owner for a country in which non-white individuals were not considered whole human beings.

On the concept of honoring the military, if that’s what NFL teams aim to do during the national anthem, this display apparently didn’t matter at all until 2009. Before ’09, players remained in the locker room and walked onto the field during the national anthem. On a segment of ESPN’s “First Take” with Stephen A. Smith, a noggin I typically avoid when it comes to talking heads in the sports world, Smith brings up the aforementioned fact. He also cites the following illuminating statistics: The U.S. Department of Defense paid the NFL, a multi-billion dollar entity that subsists on men playing a game, $5.4 million between 2011 and 2014, and the National Guard paid the NFL $6.7 million between 2013 and 2015 “to stage on-field patriotic ceremonies as part of military recruitment budget line items.”

To espouse the NFL and its players to patriotism as if these ceremonies are some sort of naturally occurring phenomenon that exist simply to honor veterans out of the goodness of the NFL’s collective conscience would be to ignore the fact that millions of our country’s defense dollars are funding what is plainly compulsory patriotism, given a platform due to the large audiences watching football. And people are angry Kaepernick is using the very same platform to raise awareness about a social issue.

The online court of public opinion can of course be an ugly place. So let’s talk about the formal reactions from actual police officers. In the wake of the initial protest, the Santa Clara Police Union made public their threat to stop working 49ers home games due to Kaepernick’s protest until management disciplined Kaepernick, whatever that means.

They have since reversed their stance on performing the voluntary yet paid job of patrolling games at Levi’s Stadium, but are still “disappointed that the 49ers management has ignored [their] concerns that were created by their employee, Mr. Colin Kaepernick,” according to a statement from the California Peace Officers Association. I concede that I understand their initial frustration with a protest aimed directly at their profession, but the problem with the reaction lies in the fact that it ended there. There was the facade of understanding displayed in the fact that the Union would continue to encourage its officers to work home games, but any grain of sincerity was wiped away by the fact that they are still upset the 49ers didn’t discipline one man kneeling in a stadium of nearly 70,000 people.

As I said, I see the reasoning behind officers being initially upset at these protests. I, on the other hand, am angered by the level of police brutality in this country, especially against unarmed black men. It is clear that there is anger on both sides of this argument, but what matters far more than any amount of frustration is the fact that our privilege as white people allows us to get angry rather than afraid. This sentiment was summed up succinctly in a Scott Mendelson tweet in the wake of the Ferguson decision that read, “White privilege is me being outraged and angered by the #FergusonDecision rather than utterly terrified.” African Americans’ fear of police brutality is still legitimate today and calls for a much deeper understanding by everyone.

It is approaching the two-year mark that I tweeted on this topic and effectively divided my family in half. My tweet read “People will rise up, flip everything on its head, or police will continue to shoot black people because they’re black. F the latter.” I grew up with two cousins that are police officers. At the age of 19, when I wrote that tweet, they were the last thing on my mind because I had nothing but respect for them and their work in our community. I was upset at the decision to not indict the officer that shot and killed Mike Brown in Ferguson, Missouri. But I held next to no qualms about the policemen and women I had grown up around in the Central Valley, especially the cousins I had spent just about every holiday with since my birth.

Like the reaction from the Santa Clara Police Union, the reaction from my family included no understanding. The exchange ended in anger and being blocked on Facebook by many of my relatives. In a couple months, it will be three holiday seasons with half of my family absent from celebrations and three holiday seasons having not received a single call or text from my two cousins who are both police officers and took offense to my 132 characters.

Nearly two years later, many of those who have “flipped everything on its head” are the football players I would watch with family that now refuses to speak to me. These players did so because the issue of police brutality has not been remedied in the slightest.

I often find myself thinking about how these times will be viewed in decades to come. I contemplate on which side of history I will find myself and others. In a telling and heated conversation between Quanell X, the leader of the Houston chapter of the Black Panthers, and radio host Matt Patrick, X asserts that history vindicated Rosa Parks and Harriet Tubman, and that it will vindicate the ten-year-old girl they are discussing who felt uncomfortable standing for the pledge of allegiance. As I previously argued, the movement Kaepernick started is nothing short of historic; it reaches beyond sports and will stand as a decisive moment in our country’s history where individuals will find themselves on one side or the other.

Later on in the conversation, Patrick suggests those unhappy with the state of our union should “pack up and leave,” instead of working to remedy the problem. This logic is employed by many. If we’re all aiming to be patriots here, this is about the most un-American action to take: to leave a problem alone because there are those who do not agree with your fight.

I miss my family. But perhaps what I miss more is an idealistic faith in society I had growing up. One in which understanding is possible, in which initial frustration and anger can be coped with in order to understand one another on a meaningful and incredibly necessary level.

Jackson Kerr is the Opinion editor at the Daily Nexus, and he hopes that in two more years or sooner, something will have changed.