Coming off its double-overtime draw against Riverside in its Big West opener on Thursday, the UCSB men’s soccer team headed to Cal State Fullerton on Saturday without the burden of its five-game losing streak still in its psyche. After a first-half goal for each side, and a scoreless second half, junior midfielder Kevin Feucht’s late overtime heroics delivered the Gauchos their first win since Sept. 4. 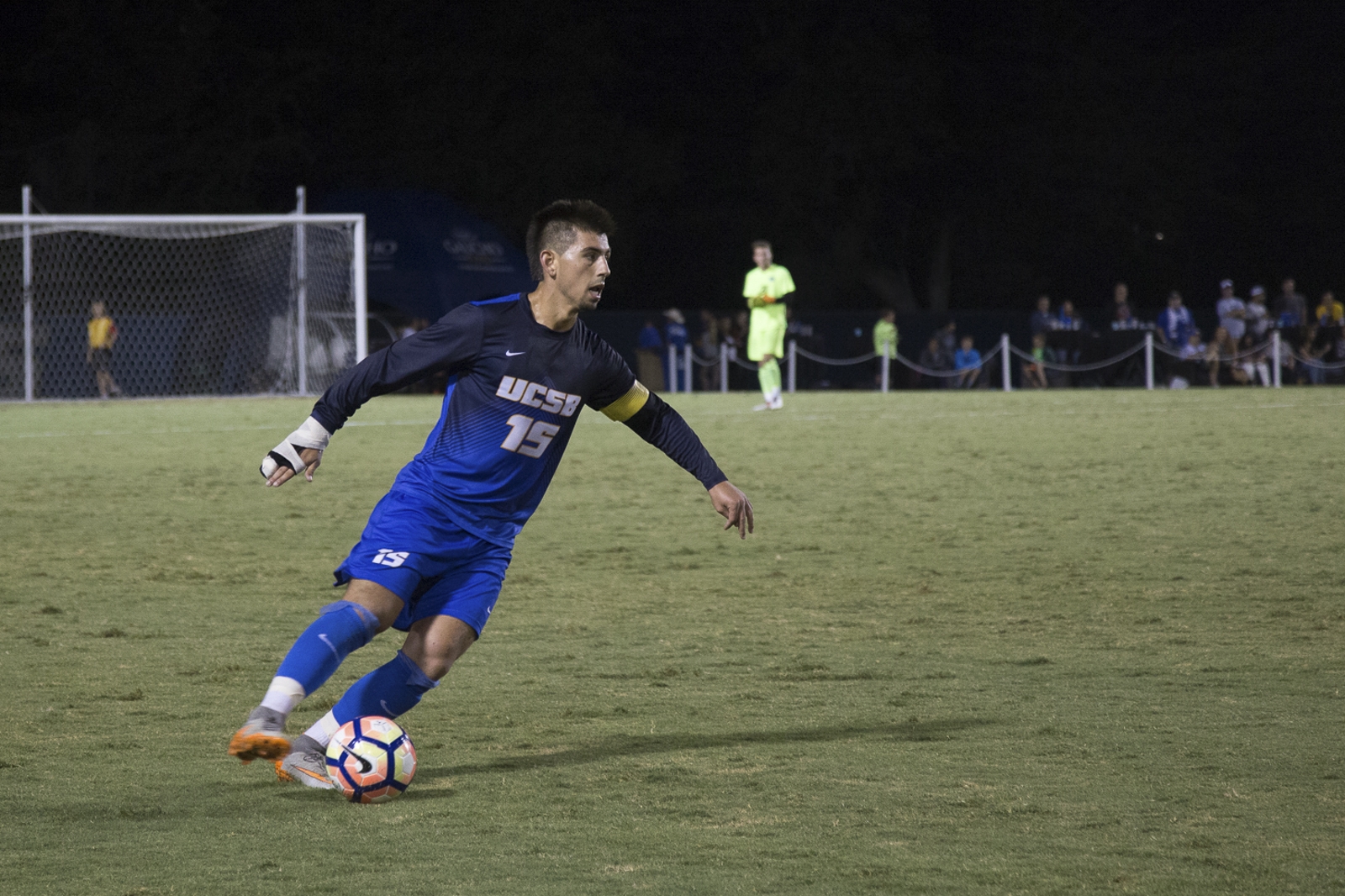 With the victory, Santa Barbara improved to 5-5-1, 1-0-1 in Big West matches and is now undefeated in its last six regular season conference matchups. CSUF now sits at 5-6-0 overall and 1-1-0 in conference play.

The Gauchos struck first in the match when freshman forward Noah Billingsley picked up the ball from a sloppy pass in the back by Fullerton’s senior keeper David Elias and finished into an open net to give UCSB a 1-0 lead in the ninth minute.

“It was pretty tough at the beginning to fit in with the team but now I’m getting comfortable with everyone,” Billingsley said of his start to the season. “I’m good but we’ve gotta keep improving. Our goal is to win every game—I think it’s a realistic goal—but we have to play together to get the results.”

The New Zealand native has quickly grown into his new starting role this year, tied for third on the team with two goals to go with an assist as well.

However, the Titans managed to respond with an equalizer in the 27th minute as freshman forward Rei Dorwart provided the assist picking up a through ball and beat the Gaucho defense to the end line. His cutback pass found teammate sophomore midfielder Ross McPhie in the center of the box, who scored the team’s goal past Santa Barbara’s freshman keeper Titouan Le Roux.

Le Roux had a relatively quiet night otherwise as he and the Gaucho defense held Fullerton to just four shots on goal for the night. To tinker with his back line that had been visibly struggling throughout the losing streak, Head Coach Tim Vom Steeg opted to start All-American senior striker Nick DePuy at right center-back.

DePuy did the job that was needed, helping the Gauchos keep CSUF under wraps for the entire second half as the teams battled back and forth in the midfield. Despite being outshot 8-7, the Titans were just as tidy in the back field area. Their allowance of eight shots were the fewest Santa Barbara has recorded in its last six matches.

After a scoreless second half, the teams headed into overtime. It was the third consecutive match in which the Gauchos played in an OT period, fourth time in their last five games.

Just 1:19 into the extra period, Feucht headed home his eighth goal of the season for the golden goal winner.

The chance came when senior midfielder Andy Perez found assist-leader and senior midfielder Josue España. After a few short passes on the wing, the España hit a first-time cross to the back post. Junior forward Ahinga Selemani just missed the first header, but Feucht was waiting behind him to finish it off to score for the sixth straight match.

“We were really excited to get the win,” said Billingsley. “We’ve gone to extra time four or five times now, so once we were able to string a couple of good plays and win on Kevin’s goal, we all went crazy.”

The Germany native is becoming one of the best players in the nation, with his eight goals likely to end up putting him in the top-ten scorers after the weekend’s matches. Nonetheless, he continues to affect the game defensively as he continues to break forward on the quick counter attacks that have helped contribute to the Gauchos’ opportunities on the offensive side this year.

The Gauchos will look to build on their recent win as conference play continues with a chance to avenge their three-loss home stand two weeks ago.

“Losing that many in a row is never good for a team, but doing it at home, we feel like we owe it to a lot of people to get a few wins this week,” Billingsley said.

Next up for UCSB is UC Irvine this Thursday, Oct. 6 at 7: 30 p.m. at Anteater Stadium. Santa Barbara will be playing in its final road match before preparing for another three-game home stand at Harder Stadium.