Heading into the Big West season opener against UCR, the Gauchos were reeling from their five-game skid, and after giving up two goals, it looked to be a sixth straight loss on the way. Second half heroics from veterans senior forward Nick DePuy and junior midfielder Kevin Feucht helped to salvage a 2-2 draw and win their first positive result in two weeks. 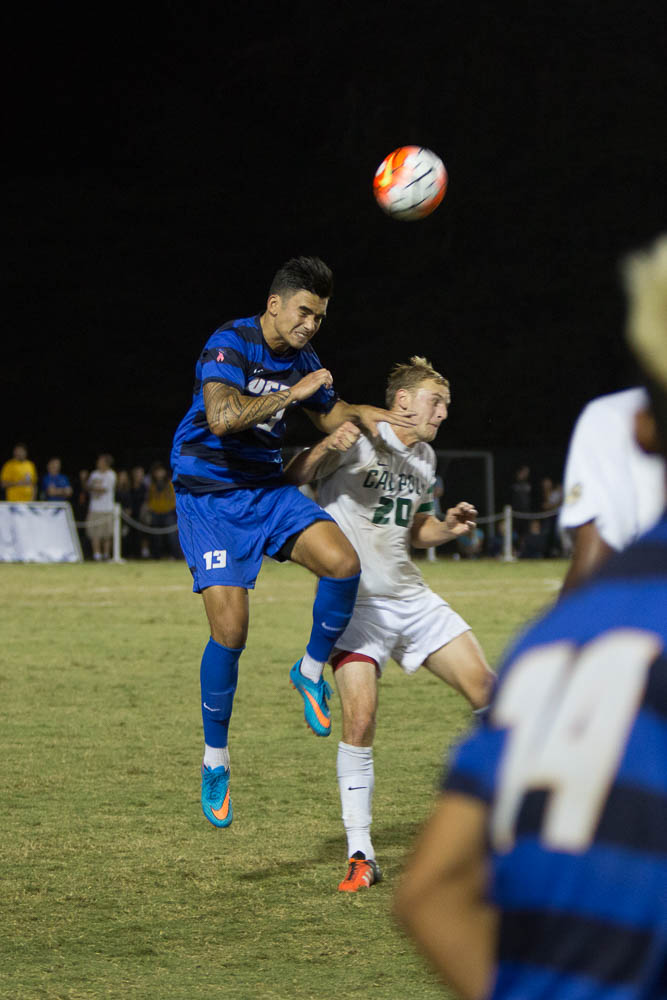 After each teams’ first draw of the season, Santa Barbara is now 4-5-1 (0-0-1 BWC), while the Highlanders now sit at 5-4-1 (0-0-1 BWC). The tie means much more than a point for the Gauchos, though, who were seemingly unable to hold onto a lead or a draw in the past three losses but have now managed to end the losing streak with the rest of conference play soon to come.

“Starting conference at Riverside, which is a hard game and a hard place to play, we’ll take any result as long as it’s not a loss,” said DePuy.

Riverside’s number No. 10 senior midfielder Romario Lomeli opened the scoring with a cool chip over UCSB’s freshman keeper Titouan Le Roux just before halftime. After the break it was more Highlanders, and in the 66th minute, they found the goal that looked to have guaranteed them the win against the visiting Gauchos when Lomeli played teammate senior forward Tyler Miguel in for his first goal of the season.

Five minutes later, though, the Gauchos responded with authority. Junior defender Randy Mendoza played senior midfielder Josue España down the left wing, who whipped his cross into the imposing DePuy in the middle before the striker headed past the UCR goalkeeper to bring the score up to 2-1. It was DePuy’s fifth goal of the season and the in-form frontman has now scored in his last three matches.

“I think the offense has been playing really well, especially at this point in the season; we’re getting a lot of chances and scoring a lot of goals,” DePuy said. “It’s great getting all the service I’ve been getting, and if the crosses keep coming, I’m sure I’ll get on the end of one or two of them.”

España has quietly turned into one of the most important players for UCSB with a team-high five assists, linking up with Feucht in the midfield to great success. Along with DePuy, the trio has the potential to lead their side to the top of the table as some of the best players in conference; DePuy and Feucht were the two Gauchos to make the Big West All-Conference First Team last season.

Feucht has possibly been the best player in the conference up to this point, starting all 10 games and registering a Big West-high seven goals (13th in the nation) and 16 points. The German has been instrumental in everything the team does going forward, breaking up the field to support DePuy and the wingers to great success.

Next up for the Gauchos is another away game Saturday against CSU Fullerton as Big West play continues, and the players are confident they’ll be able to build off the Riverside draw to get back into the win column.

“We need to step it up a little more in the back; whether that’s more leadership, more communication or just shutting guys down better, we have to limit our mistakes,” said DePuy. “I think the tie was a boost for our team going into this game. We’re not gonna quit and we’re gonna keep working hard, so I think the team feels really good coming into Fullerton.”

The match will be played tonight at 7 p.m. at CSU Fullerton. An audio stream for the game will be available on the schedule page of the men’s soccer team ucsbgauchos.com website and @thenexus_sports will be live tweeting the match.