The Daily Nexus
Opinion
Leaving Home: A Soldier, a Student and a Lesson on Self Discovery
September 29, 2016 at 5:00 am by Max Fernbacher 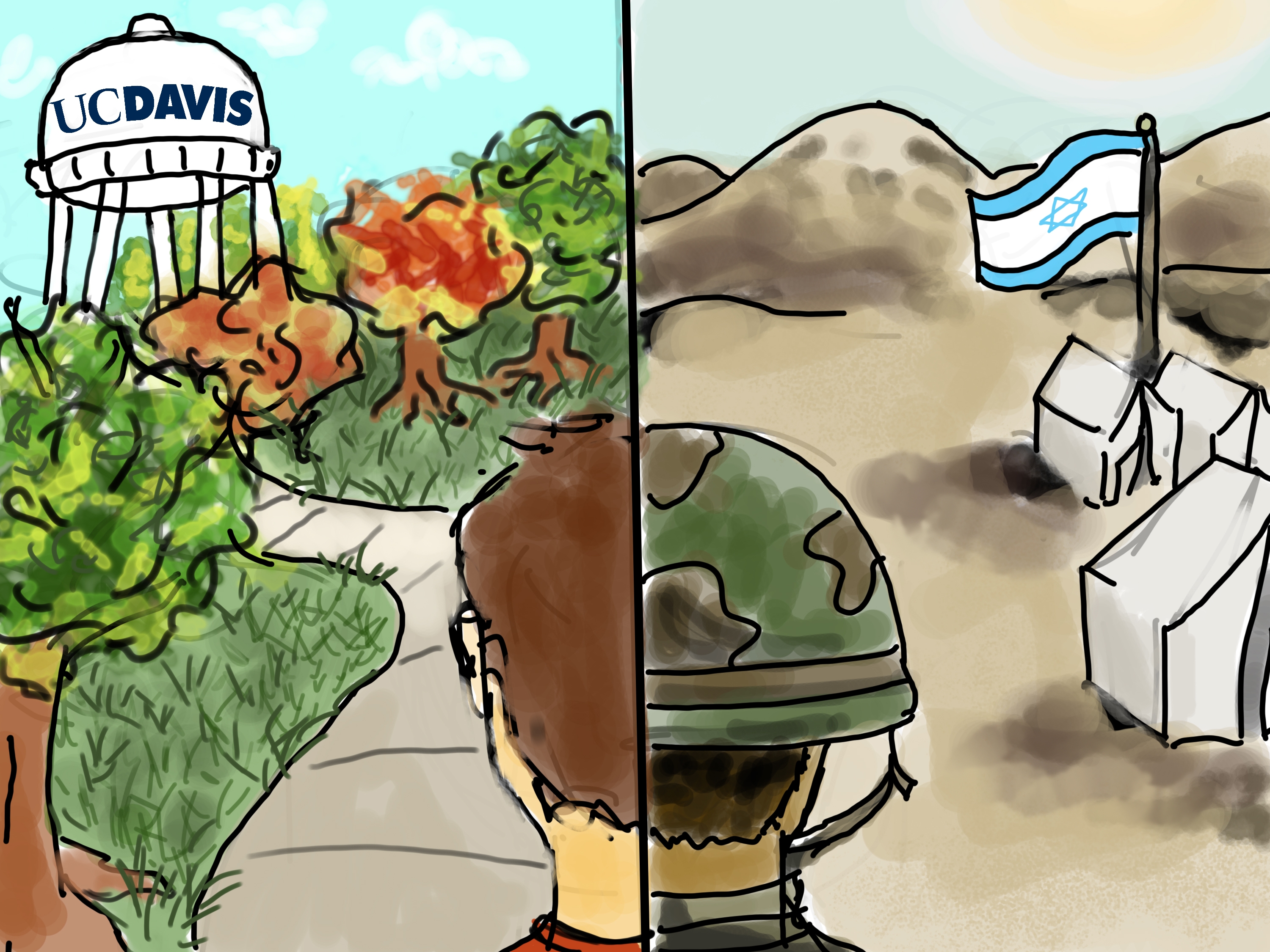 Recently, I had the opportunity to interview two of my peers who come from different parts of the world. George McConnell is a college student entering his fourth year at UC Davis. He will complete his degree in managerial economics in June of 2017. Aviv Krief is an Israeli Defense Force (IDF) soldier who will complete his three years of required service in half a year. McConnell and I recently spent 10 days in Israel on a Birthright trip. Krief was one of the eight IDF soldiers that joined our American group touring the country. During the trip, I asked McConnell and Krief about their respective experiences in college and the military. Both had learned a tremendous amount about themselves since leaving home, and it was interesting to hear their stories.

In September of 2013, McConnell arrived at UC Davis for move-in day with his family. His parents, who had dropped off McConnell’s older brother Scott at UCLA two years earlier, helped him move into his dorm room then said a quick goodbye. Before leaving, George’s dad reminded him that college is the best four years of one’s life and told George to make the most of his time at UC Davis.

Soon after his parents left, George began knocking on doors and forging friendships with his hallmates. His 50 or so hallmates from freshman year and other students he met at Davis come from all different backgrounds, something that McConnell really appreciates about college. McConnell values gaining different points of view from others at school so he can better formulate opinions and make decisions of his own.

Krief began his service in the IDF with Tironoot, or what he described as, “an easy boot camp for 18-year-old Israelis,” about 150 miles away from his hometown of Kfar Ahim. Krief’s father, Shalom, was overcome with a mix of emotions the day he dropped off Krief at Tironoot and cried for almost an hour. Shalom, which translates to “peace” in Hebrew, had served in the army himself. Krief’s mother, deeply concerned about her son’s safety even in a time of relative peace in Israel, blesses him every time he leaves home for his army base. McConnell’s mom worries about her son, too, but as she is a UC Davis alumnus, she knows he is in a safe place. Both moms worry about their sons, but their concerns are different due the vastly different environments their children live in.

Visiting his older brother on weekends, and watching the movie “Animal House” gave McConnell a false preconception of college life. He has discovered that academics in college require a much larger time commitment than high school. Most weeknights after lacrosse practice, McConnell can be found in the school library. However, he does spend time each day after class kicking it with his housemates in their off-campus apartment. He stresses that finding this balance between work and fun is crucial in college and in life.

Taking a variety of classes in college has helped McConnell discover what he is passionate about. McConnell entered college as a history major with aspirations of attending law school. Two weeks into school, he decided law school was not for him and switched his major to economics.
Despite this change of course, McConnell says that the most important things he has gotten out of college are not what he has learned in a classroom but what he has learned about himself. McConnell applauds freshmen who have declared a major but tells those who are undecided not to panic one bit. Even as a senior, he still doesn’t know what he wants to do in terms of a career. All he knows, he says, is that he wants a job after college that is fulfilling and challenging.

Before joining the IDF, Krief worried about making new friends in the army and becoming homesick. Like McConnell, he was leaving behind friends from his hometown. He thought he would be making the two-and-a-half hour bus trip home many weekends to spend time with his family and girlfriend. However, his transition to the army has gone better than he expected, and he now feels comfortable spending weekends away from home.

Although most days for him start early at 6 a.m., the camaraderie between soldiers at the base makes his job enjoyable. Like other young adults serving in the IDF, Krief is counting down the days he has remaining. He dreams of visiting exotic places like Thailand and Nepal after his service ends in January. Even though he is looking forward to his travels, Krief is proud of the three years he has spent defending his country.

“I would rather not go to the army, but because our country needs an army, I serve. This is not a normal country,” Krief said.
Before leaving the country, he would like to see its entirety on foot. Krief plans on backpacking the Israel National Trail with friends. The 680-mile-long trail runs the length of the country and takes approximately 70 days to traverse.

The trail Krief plans to walk

After graduation, McConnell would like to spend the summer traveling before starting a job in business consulting. Krief hopes to study architecture or agriculture at a university after one-and-half years of travel. Krief said his time in the army has allowed him to learn more about himself.

“I do not know if I would be able to decide at 18 what I want to do for the rest of my life. I think at age 22 or 23 after my travels, I can make a better decision for myself in terms of education and what job I would like,” Krief said.

McConnell echoed this sentiment, believing that it would be best for students to embrace the self-discovery they will experience in college.
According to McConnell, “My first couple years of college, I was learning a lot about myself. It was all kinds of crazy but crazy in a good way. College is a unique experience, and personally, I do not want it to end.”

Max Fernbacher wishes his fellow Gauchos the best of luck, and he urges you to be thankful for your four years of self-discovery in paradise!