The Daily Nexus
Opinion
Your Time at UCSB: A Letter From an Alumnus
September 22, 2016 at 5:00 am by Derek Mead

Hey there, new Gaucho, Derek Mead, class of ’09 here. (Well, actually class of 2011. My first bit of advice: Make sure your classes taken abroad aren’t cross-listed with classes in SB, otherwise you may end up taking an intro to English class at a community college when you’re 24.)

I always love that the Nexus runs these advice columns, but I’m realizing now that when I was 18 reading them, I only cared about the ones that told me it was okay to get all fucked up and have tons of sex and smoke weed while surfing and shit like that. I mean, sure, that’s cool. But here’s what I’d have wanted to know as an idiotically reckless youngster. You’ll come across all that other stuff anyway, no need to be thirsty about it.

First off, just remember two words: “do you.” It’s all too easy to get caught up chasing fads and trying to fit in when you’ve got four years free to explore who you want to be and how best to get there, and it’s a chance that’s much harder to find again. I don’t mean this just in terms of experimenting with whatever substances you come across or having sex in the library or whatever. (I mean, if that’s what you’re into, fine.) 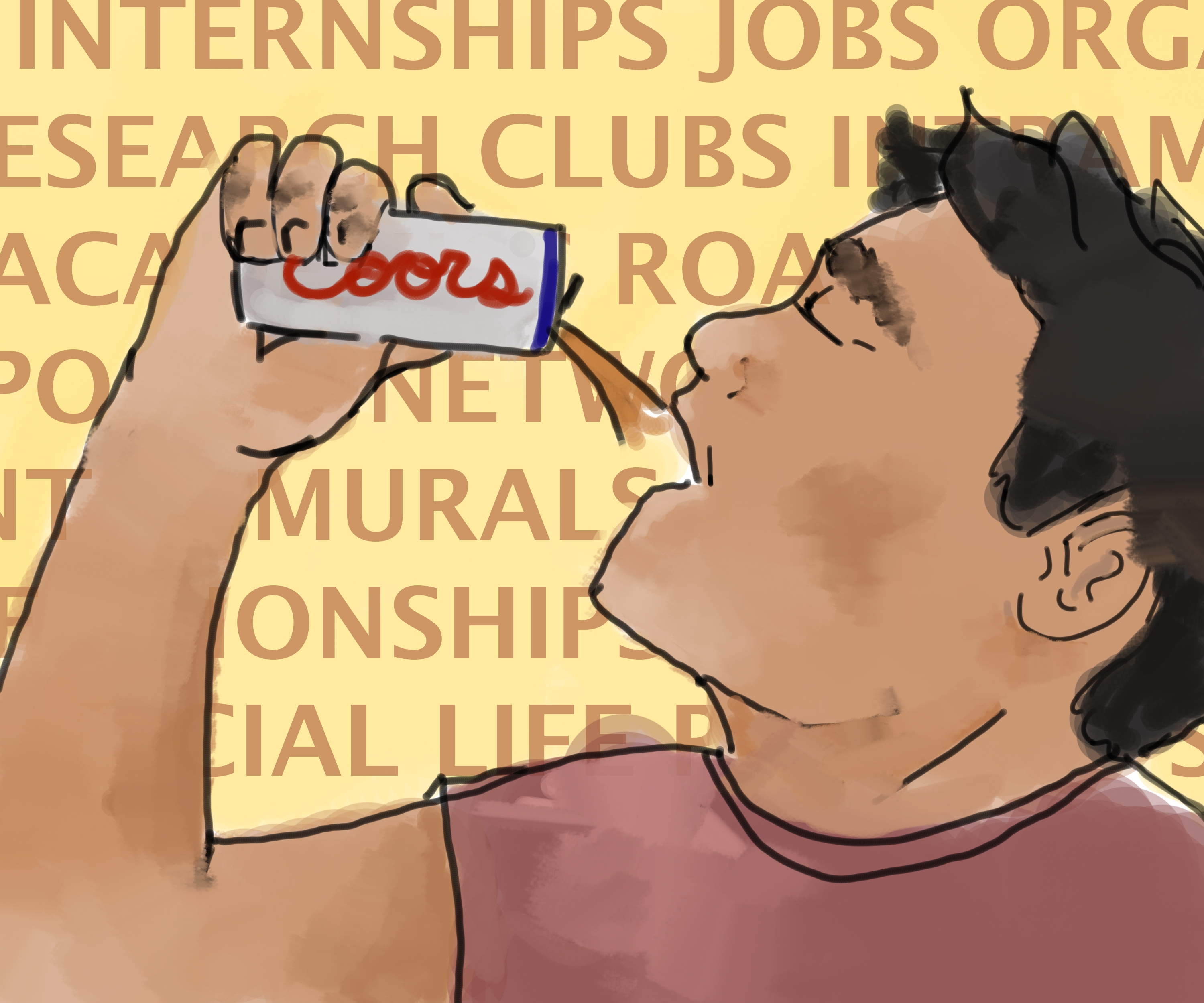 What I mean is doing something (or worse, not doing something) because you think someone might find it lame. It’s cool to be not drunk — speaking as a former drinking columnist for the Nexus, you can definitely party sober — and it’s definitely rad to spend hours grilling your chemistry professor about ions or­ whatever (chemistry was not my strong suit) or picking up a lab internship where you watch videos of birds for hours (I did this and loved it).

Join a club or activist group or anything else that even catches your eye, and don’t be afraid to talk to anyone because your classmates will go on to do amazing things, just as you will. Good people to know! I was THIS CLOSE to skipping orientation for the Nexus because I was nervous and shy, and now it’s led me to a job I love as a journalist in NYC. Imagine how much of a jackass I’d have been if I skipped something I dreamed of doing just because I was worried I might be lame! Damn. Don’t do that. You’ve got four years to fool around with what you want to be, and it took me at least a year to realize that meant something more than wearing a dumb shirt while smoking weed.

Remember that everyone else is figuring their own shit out too, so try not to be a dick. That includes leaving trash on the beach.

Also, remember to take care of yourself. Being the drunkest one at the party is lame at best, annoying most often and dangerous at worst. It’s not hard to get drunk, so no need to make some sort of Ninja Warrior competition out of it. My younger self, which after nights partying in I.V. woke up in places as far away as a beach in Big Sur, a roof in Venice and a bed in FT, definitely could have used this advice.

But taking care of yourself isn’t just going to the gym occasionally and not drinking boxed wine out of a beer bong. It also means investing time in talking to your professors — man, not doing that is the one thing I regret — and spending time for self care, even if it means just sitting at the beach for awhile or taking a quiet weekend to yourself.

Your first year can move too quickly if you don’t pay attention, and there’s no sense getting stressed out; you’re in one of the most supportive and open environments you’ll find in your life if you let it be. My GPA dropped a whole point from my first quarter to my second because — I started smoking weed for the first time and then smoked way too much weed too often because I realize now — it was at least partially helping me cope with some anxiety. I wish I’d even known to think about that then.

Random: Do not get a sample platter of everything on offer in the cafeteria at dinner, just focus on one item per meal. Otherwise you’ll get bored in two months. Make sure you spend some time Googling how to lock a bike properly. It’ll get stolen anyway. Make sure you have good passwords for your email and whatnot, and think twice about who you sext. Don’t accept random drinks. Do talk to tons of people about what classes they liked and didn’t. Know your rights when and if you move into I.V. No one will ever think you’re cool for lounging on one of the guard rails over the cliff. Remember that everyone else is figuring their own shit out too, so try not to be a dick. That includes leaving trash on the beach.

The most important advice I can give you is to not waste time waiting to further explore the academic and social experiences offered, because holy shit, four years goes by fast

I learned a lot of things at UCSB that actually helped me in my career, which might be lucky, I don’t know. But the best things I learned came from seeing myself or others do something stupid and thinking, “Damn, they fucked up,” or from realizing I wanted to learn something or try something but said no because I was nervous it was lame or I’d fail. You’ll make mistakes, but learning from them is entirely the point.

The most important advice I can give you is to not waste time waiting to further explore the academic and social experiences offered, because holy shit, four years goes by fast. I’m guessing you’ll have already gotten acres of advice from way too many people both in and ancillary to your life, so I don’t mind if you write me off as another jerk with the same advice about living it up while you’re at UCSB.

I am not getting paid for this, so if I wanted to share some boring-ass advice like that, I’d send in a draft that just said “YOLO,” feel old for awhile, and return to being part of Brooklyn’s media illuminati. But trust me, these are all things I wish I could have told my younger self.

Derek Mead is the editor in chief of Motherboard, the science and tech publication of VICE Media. He was also at one point the fastest beach cruiser racer in Isla Vista.