Wednesday night, the No. 25 UCSB men’s soccer team hosted unranked LMU in its second-to-last game before Big West play begins. The visiting Lions made it difficult after jumping out to a 2-0 lead, allowing the Gauchos to tie the game twice after that, but ultimately found the late winner in the 86th to claim the 4-3 victory. 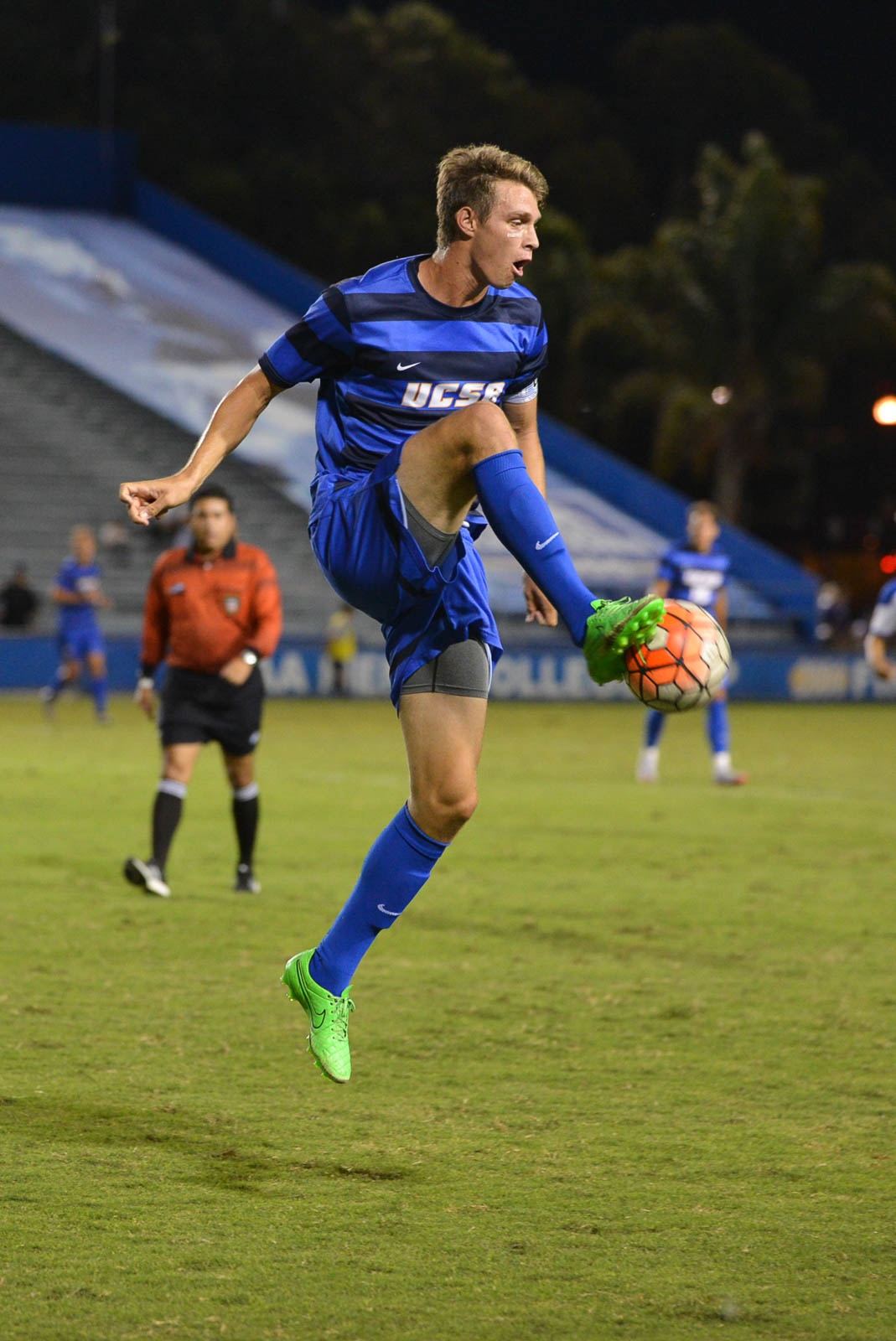 The match was completely back and forth in the second half, each team scoring before the next, as the Gauchos’ quick counters left them open in the back, where LMU (5-4-0) pounced on several great chances to grab their first win against a ranked opponent of the year.

The loss is the Gauchos’ (4-4-0) fourth straight after a four-game win streak to start the season, and Head Coach Tim Vom Steeg will try to get rid of the inconsistencies that have cost his team over the course of their current skid.

“On one hand, there’s the talent to do great things, but at the same time, if we’re not able to address the fact that we just allowed four goals, trust me Berkeley has plenty of firepower up the field to punish us,” Vom Steeg said of his team’s form going into the weekend.

In the 15th minute, junior midfielder Kevin Feucht played a perfectly weighted through ball and found junior winger Ahinga Selemani alone with just the goalkeeper to beat, but the shot knocked off the upright as it rolled past the bottom left corner.

The defense held off constant LMU attacks for the better part of the first half but was cracked open when freshman keeper Titouan Le Roux made a great diving save to his left before the rebound was sent past him by Lion midfielder Sahid Conteh.

The referee immediately whistled the goal back for an offside call, but after going over to discuss it with his assistant, reversed the call and awarded LMU with the opening goal in the 35th minute.

“Unfortunately I tried to make my subs in the first half, but the reality is that the players I brought on didn’t give us the lift I wanted, so I went back to the starters, who gave it everything they had and got some goals, but when we got tired, we just made mistakes,” Vom Steeg said.

The last chance of the half came when junior winger Dalton Pando’s defensive pressing won him the ball high up the pitch, and he put the ensuing cross right across the six-yard box. Unfortunately for the Gauchos, though, the ball was just out of All-American striker Nick DePuy’s reach right before the break, leaving LMU’s lead at 1-0 going into the locker room.

Less than two minutes into the second half, LMU doubled their lead with a wonder of a volley from 25 yards by Jose Ochoa. The ball bounced out in front of him perfectly, and the Lions’ defender struck an inch-perfect screamer that flew past the helpless Le Roux in the right side netting.

“The biggest issue for us is that we have two or three players that would absolutely help us and would’ve gotten us out of a game like this, but this was a tired group tonight after UCLA,” Vom Steeg said.

Feucht won the ball on the wing and feinted to his right before finding DePuy, who was taken down by a rash Lion challenge. Feucht then stepped up to slot the penalty into the bottom right corner past the diving keeper for his team-leading fifth goal.

The Gauchos’ second goal came 10 minutes later when Josue España’s curling shot from the top of the box troubled the goalkeeper. The shot was blocked, but it landed just in the middle of the box, where an oncoming Noah Billingsley slotted past the grounded keeper to equalize at 2-2.

Billingsley, who was capped with the New Zealand U-20s team at the 2015 U-20 World Cup, found the net for the first time in UCSB colors and toyed with the LMU left-back all night in what was probably the best performance of his debut season thus far.

LMU regained their lead in the 83rd minute, though, when midfielder Antonio Porreco carved his way with a swerved dribbling run, finishing off the move with a tidy left-footed shot across the goal.

Just a minute later, the Lions failed to clear out a corner fully, and the second cross found Feucht on the far side, who chested down the cross and tapped a light volley into DePuy. The striker controlled the ball with his first touch, and his second was a rifled left-footed shot that rose into the top-right corner to draw the Gauchos level for the second time, this time at 3-3.

The game took its final turn in the 86th minute when an LMU corner was sent dangerously into a huge crowd of players from each team, and Connor Johnson rose highest to head home past Le Roux who was knocked down in the mix-up. The last 10 minutes were wide open, but Johnson’s header gave the visitors their third win against Big West opposition.

The Gauchos next match is their final non-conference game of the regular season against Cal at 7:05 p.m. on Friday, September 23 at Harder Stadium