The Daily Nexus
News
Campus Construction Chugs Along
September 22, 2016 at 7:27 am by Supriya Yelimeli

Orange vests, bulldozers and metal beams have become the reigning aesthetic at UC Santa Barbara, where several new construction projects have cropped up in the last year.

For freshmen laying eyes on the campus for the first time, here’s a look at the projects behind the smoke and haze. 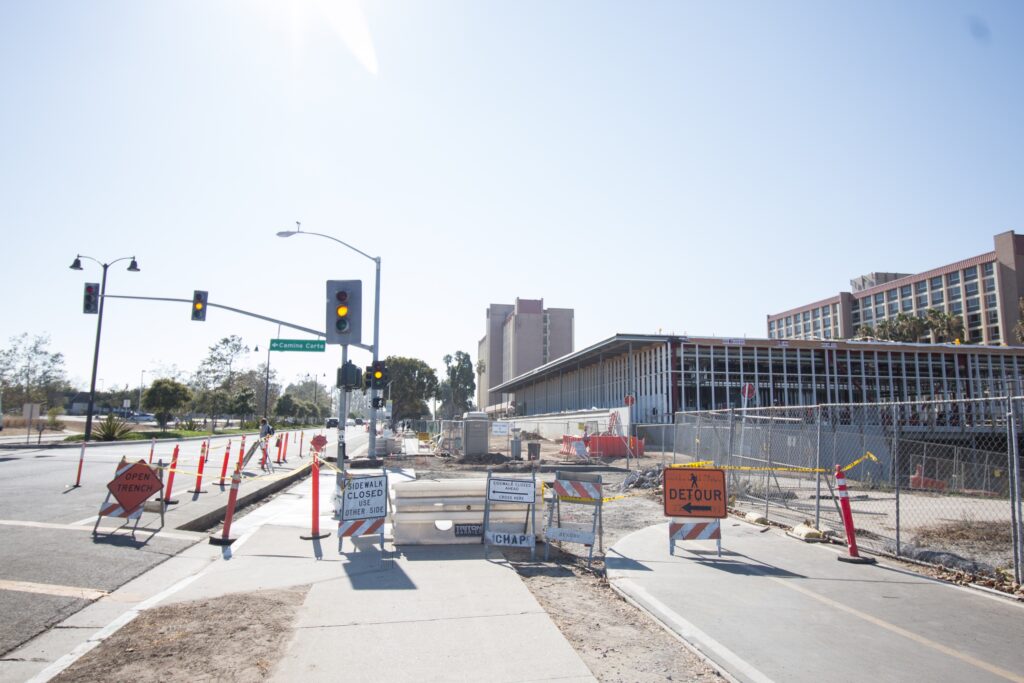 Construction at the San Joaquin Dorms has extended to the intersection of Camino Corto and El Colegio. Stephen Manga/Daily Nexus

UCSB’s current largest undertaking is the San Joaquin Housing Development, located next to the Santa Catalina dorm. Half of the dormitories and a new dining hall should be completed by the end of fall 2016.

Parking spots next to Santa Catalina have been out of commission since last year and have been relocated one mile up to campus at Lot 38.

At the end of construction, San Joaquin North and Tower Villages will house 1,000 student beds in three-bedroom, double occupancy apartments. A new two-story Portola Dining Commons will have outdoor and indoor seating.

Road construction surrounding the new housing has raised concerns from many Isla Vistans who say the new crossing system will pose risks to children who attend the adjacent Isla Vista Elementary School. University architects and planners believe the crosswalk plan will enhance safety and create easy access between the two sides of El Colegio and Storke Road. 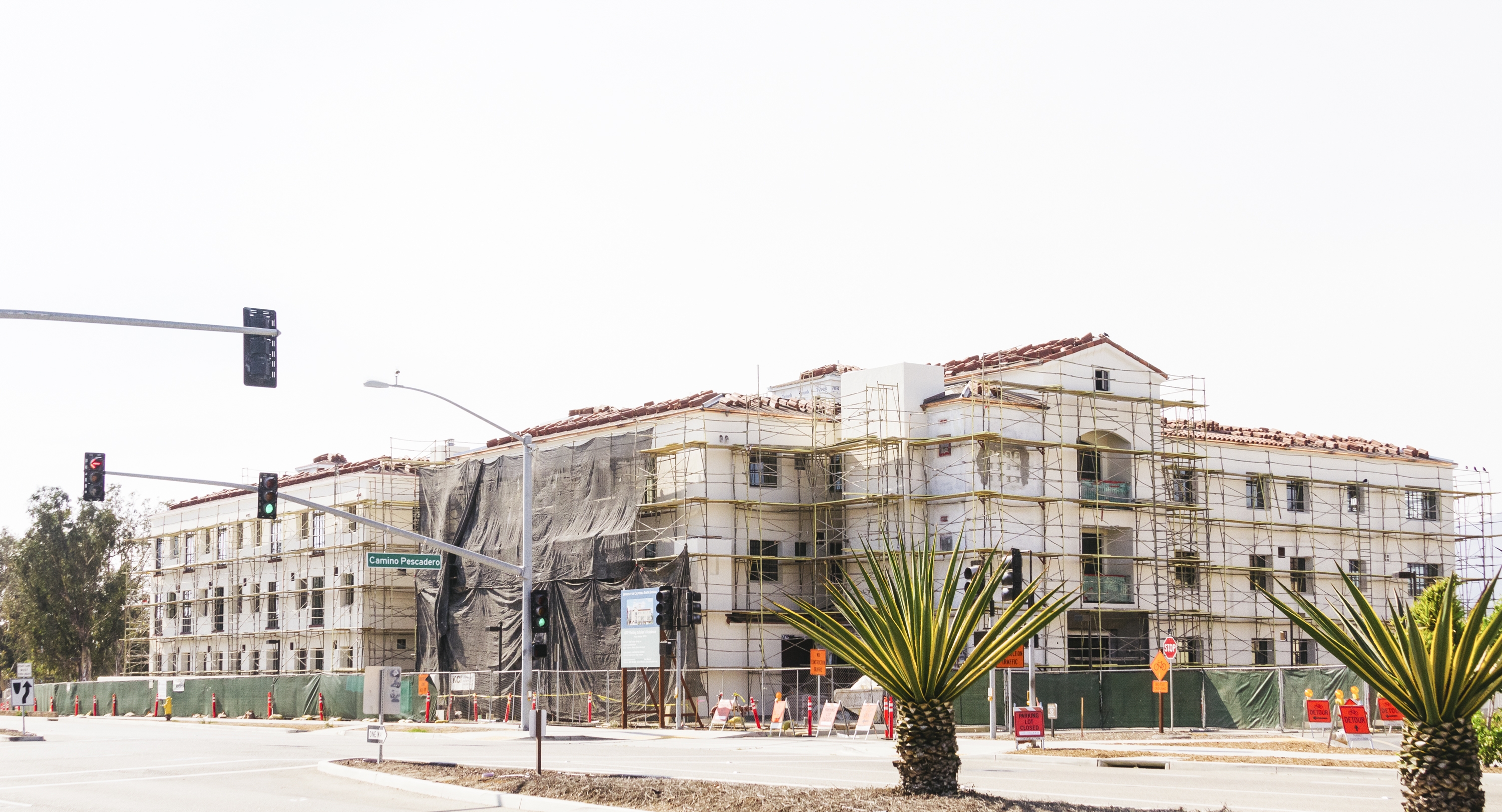 Spanning 75,000-square-feet, the large visiting scholars’ residence next to the San Clemente apartments is slated to open the first week of January 2017.

The development was announced in October 2015 as an addition to UCSB’s storied KITP. The main location of the research program is the orange porthole building next to the Channel Islands Five (Chi-5) Residence Halls.

All developments have gone as planned, according to KITP residence manager James Brill, and the building will soon allow for “unhampered creative exchange” between all visiting scientists.

Charles Munger, business partner of Warren Buffett, made the construction possible by donating $65 million to KITP. More recently, he committed $200 million to UCSB to replace the Chi-5 dorms with more modern amenities. The plan is still running through several stages of approval.

The faculty club is a reiteration of an earlier faculty residence and conference area, first designed by Charles W. Moore in 1966.

The club, intended to host visitors, will have 34 boutique hotel-style rooms, an enclosed pavilion for meetings, presentations and private parties, two social and event terraces, meeting rooms, a members’ lounge, a bar, a main dining area and a manager’s suite.

Construction will wrap up in early October, according to campus architect Ed Schmittgen. “However, there is a period of time that UCSB needs to work in the building prior to opening to the public,” he said.

They will address items such as orienting staff, training and familiarization with building systems during this period. 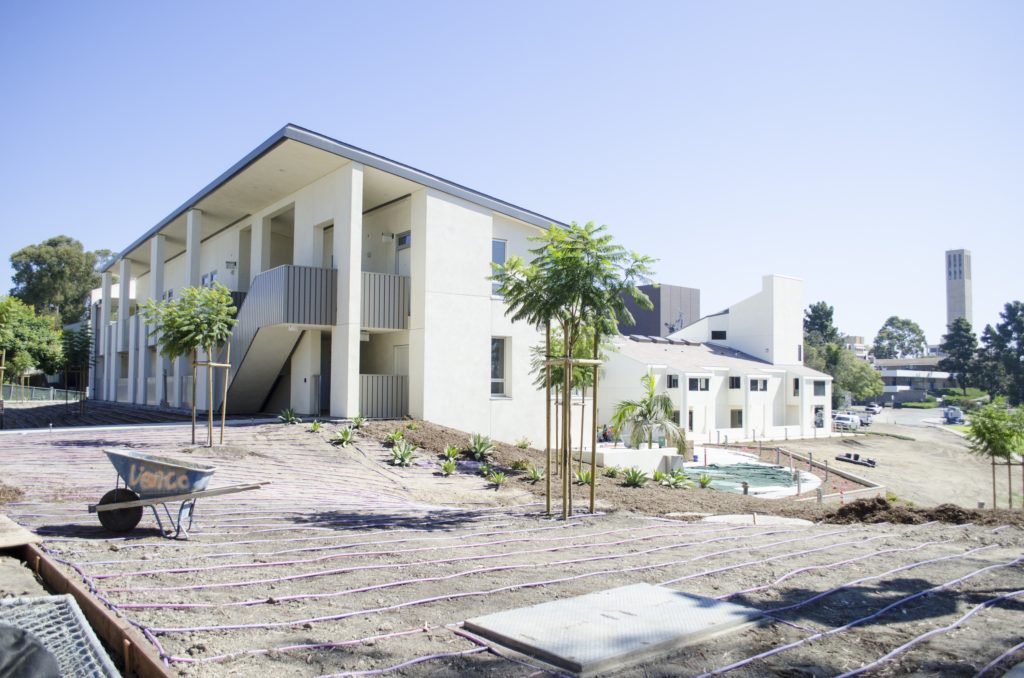