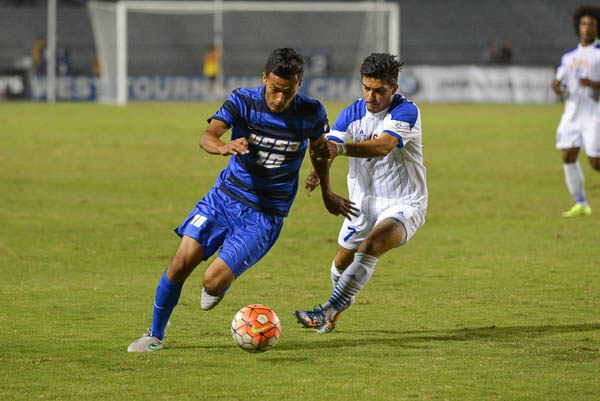 Josue España fights the ball away from a defender. Cameryn Brock/Daily Nexus

In their first game since climbing to seventh in the Coaches’ Poll, the UCSB men’s soccer team’s four-game winning streak to start the season ended Friday. In their first match of the University of Akron Tournament, the Gauchos outshot the Bulldogs 22-17, but ultimately fell short, falling 4-2 in the high-scoring affair.

Freshman goalkeeper Titouan Le Roux continued to impress in his debut season despite letting in four goals, making a season-high seven saves against a Butler attack that was clinical and incisive all game around the area.

The Bulldogs broke the game open immediately in the second minute when senior Mitch Ostrowski deflected in senior David Goldsmith’s original shot on goal. Sixteen minutes later, they struck again, this time from a free-kick, when sophomore midfielder Jared Timmer assisted freshman midfielder Lewis Suddick’s fourth goal of the season to go up 2-1.

In the first four games of Santa Barbara’s season, Tim Vom Steeg’s men had only given up a single first-half goal and found themselves trailing at the break for the first time this year.

“We got off to a really, really bad start giving up two goals in the first 15 minutes,” the UCSB Head Coach said. “Why? Who knows. Maybe we didn’t travel well, but in the second half we got it back twice but made two awful mistakes on their last two goals.”

Vom Steeg’s team responded in the second half 62 seconds in, junior forward Ahinga Selemani knocked in his second of the year after receiving senior star midfielder Josue España’s pass at the top of the box. Selemani took a quick touch forward and slotted home to cut the deficit to one.

Butler was up to the challenge, though, and hit back in the 52nd minute to reclaim their two-goal lead. Goldsmith, who provided the service for their first goal, scored his first goal of the season nodding home a nice cross from the left wing from freshman midfielder Isaac Galliford to make it 3-1.

UCSB scored again in the 60th when freshman midfielder Daniel Amo took a nice touch to beat his man in the box before slotting past the keeper to bring a goal back again to 3-2. It was Amo’s second goal this year, this time, provided by senior midfielder Andy Perez.

“Attacking-wise we were strong, and like I’ve said, we’re a really good attacking team,” Vom Steeg said. “We did a lot of good things and got a lot of players forward but made two mistakes that canceled it out.”

Unfortunately for the Gauchos, Goldsmith would foil their comeback once again, after Timmer sent him through on goal with a chipped ball over the UCSB defense, and the frontman beat Le Roux for his second goal of the game.

The Bulldogs then held on as UCSB pressed on for the last 20 minutes, creating several good chances, earning corners and receiving free kicks in the Butler half. However, they were ultimately unable to close the gap and lost their first game of the young season.

With the defeat, Santa Barbara now sits at 4-1-0, but will have to rebound quickly before facing yet another ranked opponent on Monday in Akron. Butler remains undefeated at 3-0-1 after the win.

“Akron is one of the top ten teams in the country and I think we are too, but we can’t make the same mistakes or we’re in trouble,” Vom Steeg said of their upcoming match. We have to have a different approach and definitely have to play better, and we have to do that to compete with the best teams.”

On Monday, the Gauchos’ Akron tournament continues against the hosts at 4:30 p.m. The Zips, ranked No. 1 last week in the Coaches’ Poll before their 6-1 loss to No. 8 UCLA, will be the next test and the second ranked opponent in a row.