The UC Santa Barbara women’s soccer team is now 6-0 after a commanding performance Friday over the St. Francis Red Flash. The 1-0 victory doesn’t tell the whole story of just how dominant the undefeated Gauchos were in this game. The Santa Barbara defense held the Red Flash to only 2 shots the entire game and none were on goal. 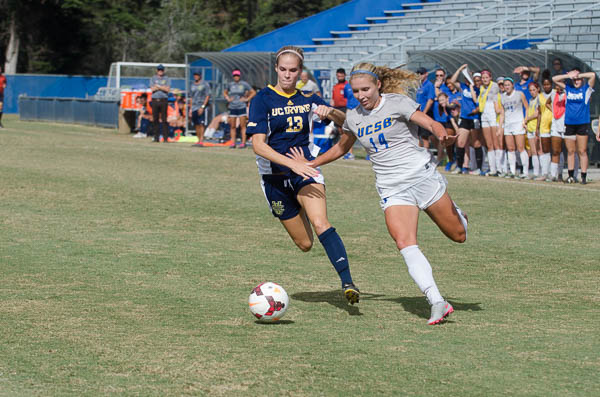 The Gauchos outshot the Red Flash 20-2, taking 6 attempts in the first half and dominating the second half with 14. St. Francis was only able to get one shot off in each half. While UCSB controlled the entirety of the game, it was the sophomore midfielder Mallory Hromatko who stepped up to score the game-winning goal for her team.

After 45 minutes of scoreless shooting in the first half, Hromatko chased down a cross from freshman left midfielder Shaelan Murison within the first minute of the second half. Able to get a foot on it, Hromatko found an opening in the goal and pushed the ball right past Red Flash sophomore keeper Julia Hernan to score her third goal this season. The winning goal could have been one of many as the Gauchos continued to fire off shots for the remainder of the game, but could not seem to find the back of the net.

In the 52nd minute, Gaucho sophomore midfielder Sydney Magnin came close to scoring a second team goal when she hit a beautiful header that barely rang the crossbar. Shortly after, current Big West Offensive Player of the Week Amanda Ball, junior forward for the Gauchos, attempted a shot that barely went wide of the goal post. Ball led the game with a total of five shots. Also contributing was midfielder Dakota Griggs who had three shots in the game with one on goal.

After the Hromatko goal, the Gauchos shut down St. Francis for the rest of the game. UCSB now has five consecutive shutouts in its last five games. While the Gauchos continue to ride their winning streak, the Red Flash drops to 1-6 on the year.

Senior keeper for the Gauchos Jacq Caginia made her first season appearance and earned the win after taking over in the second half. Caginia had 17 saves in her junior season and four shutouts. She is another dependable player to have in the goal aside from sophomore keeper Brittney Rogers who has had an outstanding season so far with 17 saves this year.

Coming into town on Sunday are the Running Rebels from University of Nevada, Las Vegas.  The Running Rebels hold an overall record of 5-1 on the year and are currently coming off a 2-1 win last week over Southern Utah. They come into the match averaging 3 goals per game while holding opponents to 1.17 goals on average. They also play disciplined, as none of the UNLV players has yellow or red cards on the season.

UNLV features a balanced attack led by freshman forward Michaela Morris who leads the team with four goals, including two game-winners this year, and their two starting senior forwards Dakota Blazack and Susie Bernal. Blazack and Bernal each have scored three goals this year while Blazack leads the team with 15 shots on the year, 11 of those on goal. Bernal and senior forward Lily Sender each lead the Running Rebels with four assists.

The undefeated Gauchos have only allowed two goals this season, and the big question is how long they will be able to maintain this winning streak. Sunday’s match will be yet another challenge and opportunity for the Gauchos to improve upon their 6-0 record. With every convincing victory, the Gauchos are appearing like a freight train that cannot be stopped.

UNLV will try to be that team which puts on the brakes when they meet the Gauchos on Sunday at 1:00 p.m. in Harder Stadium.