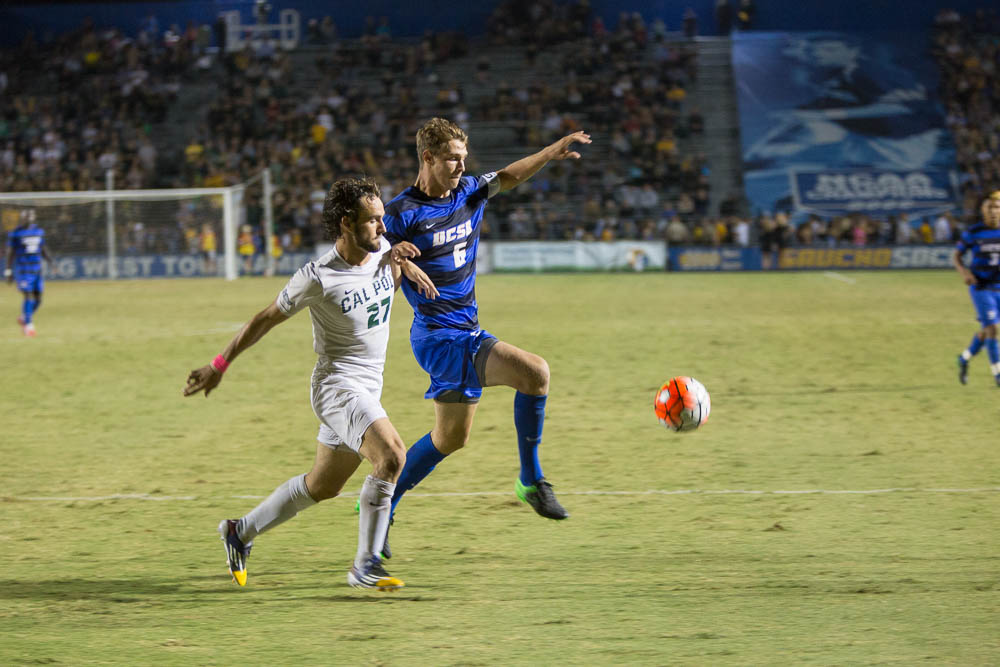 In their opening match of the Wolstein Classic, hosted by Ohio State, the UCSB men’s soccer team held on for a 2-1 win over Oakland (Michigan). The Gauchos struggled to adjust to the Midwest summer weather in hot and humid Ohio, but their efforts were rewarded with senior midfielder Josue Espana’s 75th-minute winner.

Santa Barbara jumped out in front in the fifth minute when a pair of freshmen, right back Mateo Restrepo Mejia and midfielder Daniel Amo linked up to break the game open. Mejia picked out a perfect cross for Amo in the middle, who coolly finished the chance to score his first collegiate goal.

By the half, UCSB was in total control, outshooting the Golden Grizzlies 9-4 in the first period, but were unable to head in to the break with a bigger lead, hitting the post three times and forcing a couple of key saves from Oakland’s sophomore goalkeeper Zach Walker.

“We played a good first half, getting the goal and hitting the post a couple times, but we didn’t get the second or third goal before the break, so we knew it would be a dog fight in the second half,” said Head Coach Tim Vom Steeg, last year’s Big West Coach of the Year.

After the intermission the Michigan team turned the tides, and after finding an equalizer in the 47th minute through halftime substitute and junior forward Austin Ricci they controlled the Gauchos for most of the half. Oakland was much more threatening in the second half, much to the credit of Ricci, who led the Grizzlies with 8 goals last year.

UCSB scored the match-winner with 15 minutes to go when Espana found the ball bouncing around in the area, and after his first shot at Walker bounced into the middle of the box, the Gaucho midfielder pounced on the second chance to slot home from just outside the six-yard box, regaining Santa Barbara’s lead, 2-1.

Espana is coming off a brilliant campaign last season in which he scored two goals, assisted four, and was named to the All-Big West First Team. He has picked up right where he left off this year. The senior netted twice in last week’s friendly versus Westmont and added another against Oakland, looking poised to become one of the Gauchos top offensive threats this year.

“We want Josue to continue to be a goalscorer for us, and offensively he might be our most important player because of all the things he does on the ball,” Vom Steeg said of the midfielder. “We’re really happy he’s started on a goalscoring streak, and there’s no reason he can’t keep it going with how good he is.”

UCSB’s All-American striker Nick Depuy and winger Ahinga Selemani both found themselves in great positions to score, each registering five shots in the win. Depuy led the Gauchos with 15 goals last term, and Selemani was third on the team with five.

The Gauchos’ Titouan Le Roux made his first start in goal since UCSB’s first choice goalie, Justin Vom Steeg, was signed by 2. Bundesliga side Fortuna Dusseldorf last week. With Vom Steeg moving to Germany, Le Roux seized the chance, making an impressive diving save in the first half to keep the game at 1-0, and kept his cool after conceding the goal to hold onto the 2-1 win.

Le Roux, the Chatenoy, France native, was one of three freshmen to start for Santa Barbara, along with Mejia and Amo, and all three were highly involved in the Gauchos’ opening day win.

“[Mejia and Amo] both played really well, connecting for the first goal, and Titouan came up with a big save in the first half,” Vom Steeg said. “We’ve got really good young players and it just speaks to how strong our recruiting class was.”

Next up for the Gauchos is a date with the hosts Ohio State on Sunday at 4 p.m. in what will be the final game of the Wolstein Classic. The game will be broadcasted at ucsbgauchos.com on a live audio stream.