The 2016 season seems to be off to a solid start for the UCSB women’s soccer team. Coming off of a 3-2 double-overtime victory over Fresno State last weekend, the Gauchos will look to carry the momentum into their second non-conference game this year against the St. Mary’s Gaels on Friday.

The Gauchos are currently 1-0 after its aforementioned victory at Fresno State, while St. Mary’s has suffered a tough start sitting at 0-2 to kick off the 2016 season after losses to other Big West opponents, UC Irvine and CSU Fullerton. 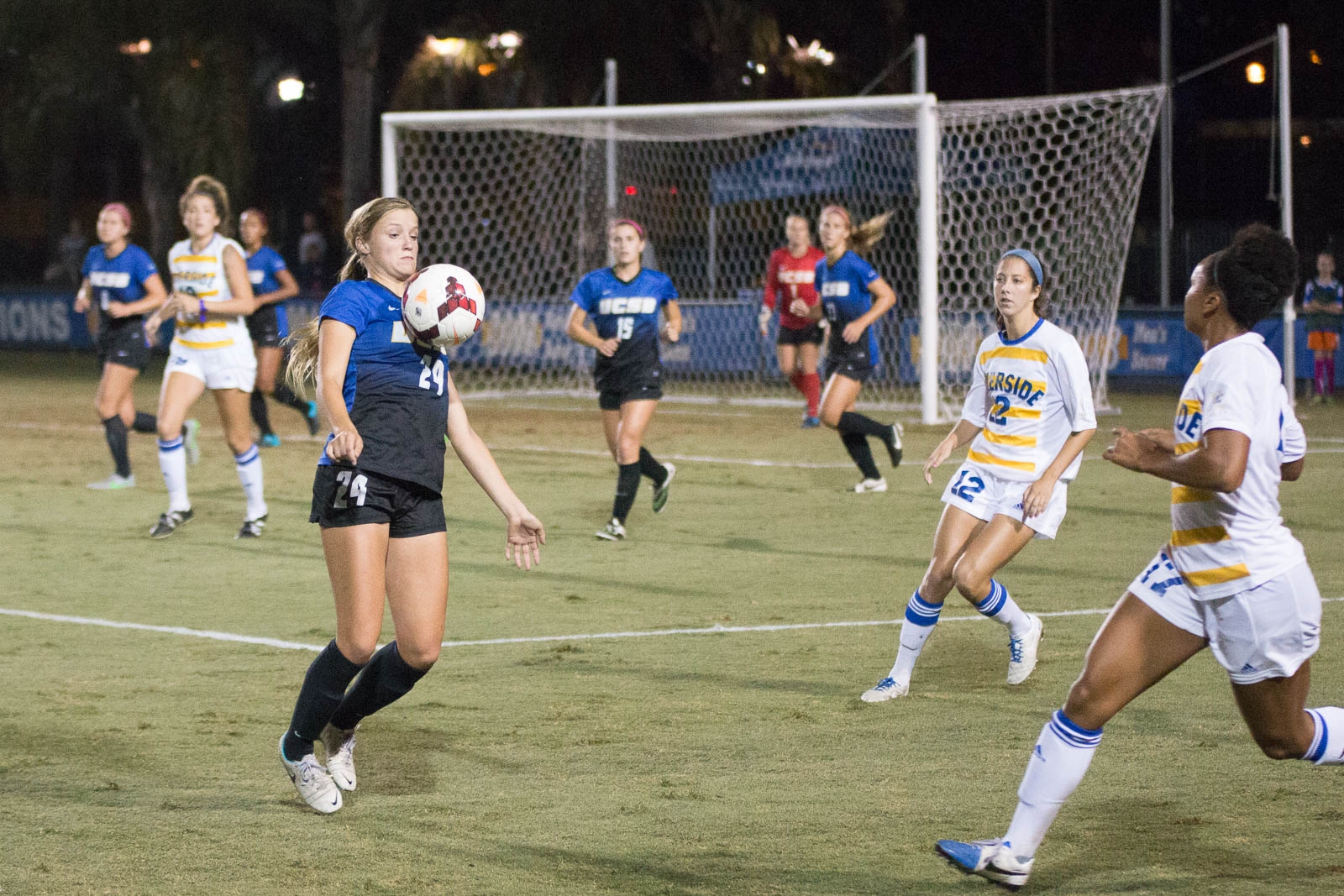 Breaking former Gaucho Jennifer Borcich’s record with nine total goals and 24 points, the highest by any other freshman in UCSB history, Hromatko will surely develop into an elite forward for the Gauchos. Stephen Manga/Daily Nexus

St. Mary’s has been a serious challenge for the Gauchos in the past. The last five times the two teams have met, the Gauchos have been able to pull off only one win. However, UCSB will have home-field advantage this year, unlike last year when they took a tough 2-0 loss on the road.

A stable coaching staff is crucial for any great team. The Gauchos have been fortunate enough to be under the direction of head coach Paul Stumpf for the past 17 years. While there have been ups and downs, it looks like the Gauchos are heading toward another successful era. UCSB finished the 2015 season with a 13-6-1 overall record, a huge difference compared to its total of eight wins in the 2014 season.

St. Mary’s hasn’t seen double-digit wins since 2001 when it closed the season with a terrific 15-3-2 record. One reason could be the frequent change of head coaches the Gaels have had to endure. Over the past 20 years, St. Mary’s has seen six different head coaches come in and out of the program. The team is adjusting to a new coach right now, Travis Clarke, who took over the program just last year.

Aside from a new coach, the Gauchos will be facing a young Gaels team as they added over 10 freshmen to their roster this year. This could be a game-changer for the Gauchos considering the team is playing with five returning All-Time top scorers and is loaded with All-Time Letterwinners.

One of these standout players is sophomore midfielder Mallory Hromatko who was honored as Big West Freshman of the Year in 2015. Hromatko contributed nine goals in her first year at UCSB, ranking her as the highest-scoring Gaucho freshman since 2001. Scoring goals aren’t Hromatko’s only strong point. She also was the playmaker behind six goals last season, contributing a team-high six assists.

Gaucho junior forward Amanda Ball has put in a lot of work in the off-season, and it shows. Her three goals against the Bulldogs last week nearly equals the five goals she scored all last season. Named Second Team All-Big West and earning third team honors in the NSCAA All-Region during her sophomore year, Ball is expected to be a big contributor to the team this year, and there are high hopes for this rising star.

St. Mary’s also has some dynamite of their own. Junior forward Hannah Diaz brings an intimidating presence on offense for the Gaels, as she scored a total of four goals last season with three assists. She appeared in all 20 matches her sophomore year and was the first Gael since 2011 to earn All-West Coast Conference First-Team honors. This season, Diaz has scored her team’s only two goals so far, resulting in the game-winning goal in its exhibition match against CSU Bakersfield and the Gaels’ first goal of the season against Cal State Fullerton.

Gaels senior midfielder Samantha Dion also had a great sophomore campaign scoring nine goals with four assists and earning a spot on the All-West Coast Conference Second-Team. Although she was out for five games in her junior season, Dion still managed to score six goals with three assists. The veteran player will be eager to attack Gaucho territory on Friday.

The upcoming game between these two teams will be a big match for both. The Gaels will be playing under the pressure of protecting their reigning legacy, and the Gauchos will be fighting to break the norm and extend their winning streak into the season.

UCSB will play its home opener against St. Mary’s on Friday, August 26 at 7 p.m. at Harder Stadium.