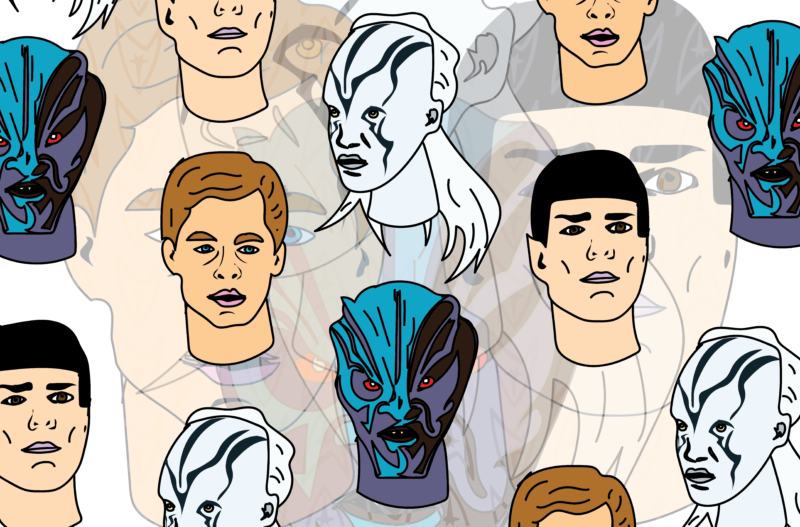 “Star Trek Beyond” is a bit of misnomer. The Enterprise crew never really goes “beyond” anything, neither in the galactic nor the as-characters sense. A better title would have been “Star Trek: Evolution.” That said, perhaps it is warranted since the film seems to really be all about going beyond one’s nature.

A recurring theme in the film, after all, is transformation. Kirk and Spock have both become contemplative about what their futures hold for them and find themselves at a crossroads: Will they remain with their friends and keep Trekkin’ on the Enterprise’s dull five-year mission, or will they choose a higher purpose that will allow them to make change? This is the great quandary the two must consider, as, wouldn’t ya know it, the Enterprise gets the living shit kicked out of it by a superior force.

And who is behind this shit-kicking? The ridge-headed alien Krall (played by Idris Elba, whose baritone gives Morgan Freeman’s distinctive voice a run for its money). Unlike Shere Khan from “The Jungle Book,” however, Elba’s “Trek” villain is barely threatening or compelling. Just like Khan (the other Khan), he’s mighty pissed at Starfleet and wants to destroy them. This time, however, he has a MacGuffin key to a superweapon, which is just like most other superweapons you’ve seen. Krall, you’re lucky your makeup looks awesome; otherwise you’d be pretty boring.

Good thing the villain isn’t really the focus. Most of the time, we follow the divided members of the Enterprise crew on a Class M planet (basically, another Earth) as they try to figure out how to solve their predicament. Well, mostly: Uhura settles on psychoanalyzing Krall for some reason.

On the more exciting end of things, Kirk and Chekov struggle to survive against alien onslaughts and dim lighting. Meanwhile, Scotty meets one of the first fresh and fun characters in the Star Trek franchise for a while: Jaylah, played by Sofia Boutella, who this writer predicts could snag a role in “The Expendabelles” (whenever the damn thing comes out, that is). Boutella is no stranger to bad-ass roles (see “Kingsman: The Secret Service”), and here she gets more ass-kicking in than any other character, what with her superb hand-to-hand combat and some staff-wielding skills that would make Rey jealous.

Speaking of action, what differentiates the action of “Beyond” from its predecessors is its use of anachronisms within the plot: Kirk using a motorcycle to evade aliens and blasting spaceships to the tune of The Beastie Boys (McCoy humorously refers to “Sabotage” as classical) is something that “Enterprise” fans will wholly appreciate. Essentially, Star Trek’s sci-fi roots have been boiled down somewhat for the sake of the fight scenes, which is a good thing in this case. There’s only so many times you can watch a pair of spaceships casually float by while shooting lasers at each other.

Apparently, one of the big criticisms of the prior “Kelvin timeline” Star Trek films is their lack of life lessons. You certainly get some here, courtesy of Kirk. In the time he espouses said lessons, however, he could easily be taking Krall down and preventing his generic master plan from succeeding. I don’t quite remember where I heard this, but I think it’s an appropriate adage for such a scene: “You can suspend disbelief, but not common sense.” In this case, common sense is shooting a genocidal alien before he can commit mass genocide.

Finally, I feel it’s appropriate to address the two big losses to the Trek world: Leonard Nimoy and Anton Yelchin. The movie is dedicated to the memory of both. Considering the timing of their deaths, only Nimoy’s really affected the plot, and in a touching way that feeds into Quinto-Spock’s character arc. Since this is Yelchin’s last time on the final frontier, it’s good to see that he gets a fairly prominent role in the plot, a final hurrah for a talented man gone too soon.