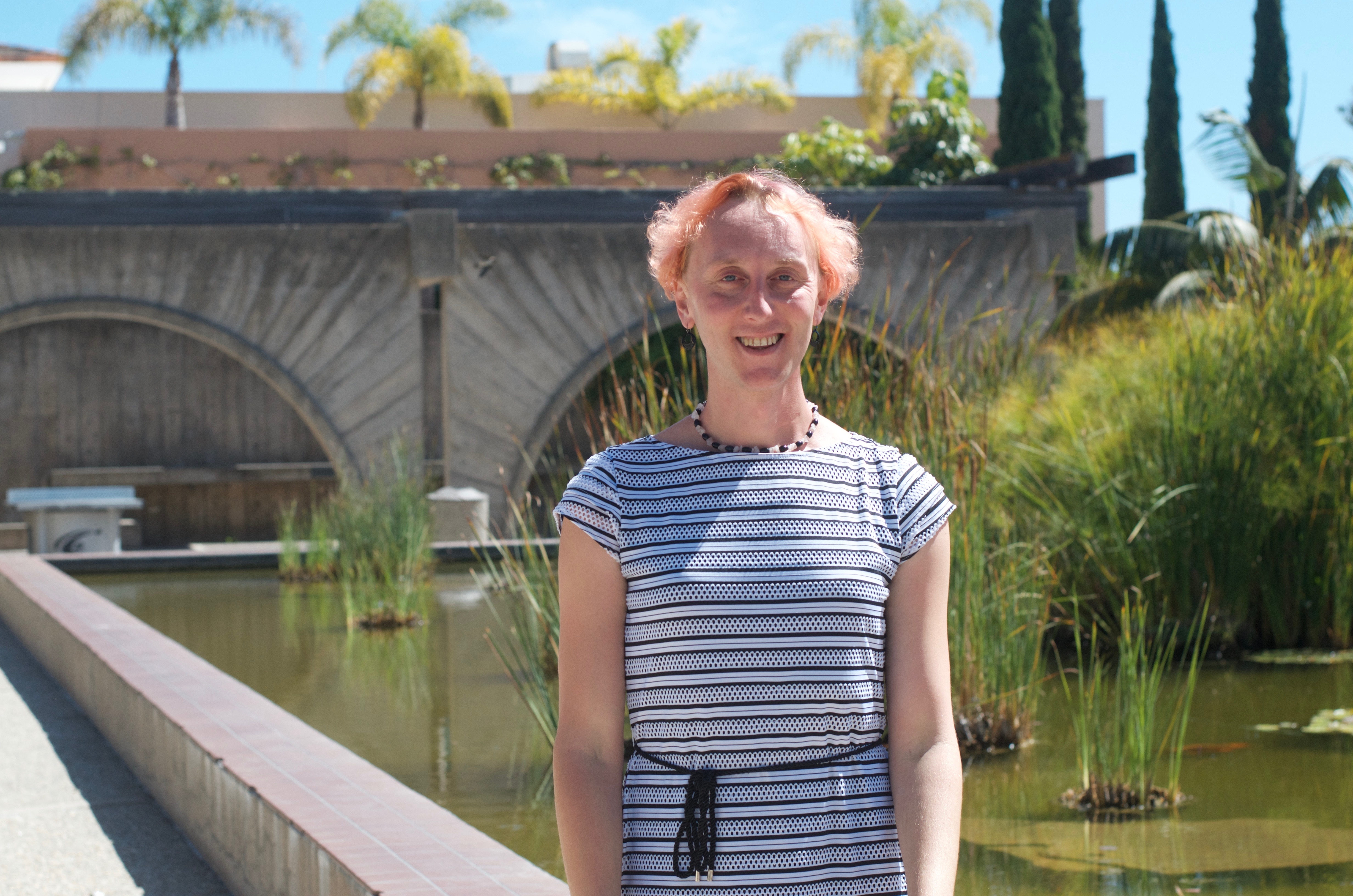 After cycling through six homes in three months, Angela Karmis wound up in a Pasadena hospital on July 15, unaware that “missing” posters with her photo were surfacing throughout Santa Barbara.

Karmis, 32, grew up in a small town in Illinois and moved to California in 2005 to begin a doctorate program in physics at UC Santa Barbara.

Her childhood had been “less than happy,” Karmis said, so the move away from her “edge of nowhere” hometown to the city of Lompoc allowed for a new start in close proximity to a lively city and a renowned university.

Karmis chose to study physics because she thought it was beautiful, conducive to concrete answers and tangible processes. As a graduate student, however, she received very low stipends for research, and even when she graduated in 2012 and began working as an adjunct lecturer, she never found herself “really on her feet.”

In addition to financial struggles, “I always felt like I was behind, like I was always catching up,” said Karmis, who had always been told she was smart and pushed into the “upper echelon” of academics. Her past struggles with depression and anxiety often caught up with her, making it difficult to work with students as a teaching associate in the physics department.

Shortly before the academic year began in fall 2014, Karmis decided to fulfill a longtime need and undergo a male-to-female transition. She found little support from local hospitals and traveled around the central coast before she found a doctor at the Santa Barbara Neighborhood Clinic. The transition proved to be a radically positive change.

“I became a lot more confident knowing more about myself,” said Karmis. She noticed her teaching begin to improve and she became active in LGBTQ activism groups at UCSB and in Goleta. She also participated in panels for youth at the Pacific Pride Foundation and began volunteering as DJ for a KCSB-FM radio show called “Love Letters from the Submind” to discuss issues relevant to the transgender community.

Amidst her positive transformation, however, her unstable mental health and stressful academic life continued to weigh down on her, Karmis said, and in January of 2016, she attempted to commit suicide.

Her friends were very supportive throughout her recovery and they took her in when she moved out of her shared home with her mother to focus on self-care. She also took a medical leave from UCSB at this time, teaching her last course in January.

“I really wanted stability in and structure in my life, and I wanted to feel safe,” Karmis said, but she didn’t, and the continuous process of relocating took a large toll on her, evoking feelings of isolation that triggered post-traumatic stress disorder.

“I really wanted stability in and structure in my life, and I wanted to feel safe.”

On July 15, Karmis attempted suicide a second time. “I was feeling very isolated,” she said, “I was reaching out not for help, just for friendship,” and she hadn’t succeeded in finding it.

She spent the next six days recovering in the hospital and finally contacted her friends about her location after retrieving her phone from a lock box. Her time in the hospital was marked by highs and lows, and she said she needed the time by herself to get her thoughts in order.

“I don’t want to live a closed-off life anymore,” she said one day after her discharge, “I want to destigmatize mental illness; I want people to know that everyone is out there experiencing different things.”

“I have big ideas and a hard time focusing,” Karmis said, but upon being discharged, Karmis set up a GoFundMe page to accept donations for a permanent residence as she moves forward. “I feel a little more directed,” she said, and she hopes to soon raise enough money to put a down payment on an apartment or a rented room in a house.

“I’m owning it now,” Karmis said. “I’m homeless.” But she shies away from the term “couch surfing,” saying that it implies she has the privilege to bounce from home to home.

Ultimately, she would like to break into the performance industry doing standup comedy or acting. Karmis also connects with music because of the “mathematics in its motion,” and said she’s considering picking up a paint tub from a hardware store to create a makeshift drum kit for performing on State Street.

“I do really love teaching,” Karmis said, admitting that it doesn’t feel immodest to say she is a good teacher, and she might one day return to the College of Creative Studies at UCSB to teach physics.

Her current goal is to have a permanent home, however, and she said she will offer manual labor or any other services to find a place to stay for “months or years,” instead of “days or weeks.”

“There’s no structure to my life right now,” Karmis said. “It’s damaging.” But her donation page has already raised over $4,000, sustaining her with groceries and mobile service, and she hopes to soon transition her life to a safe, stable location.

She was an amazing teacher too. Shut the fuck up.

That is the goal, yes.

Angela I love the most recent pic you posted of yourself on your fundraising page. You look so much calmer and somehow refreshed. I hope things continue to stabilize and improve for you! I wish I was still in SB – I would love to have a coffee or visit the zoo with you. Maybe one day. Meanwhile I will follow your story of strength and hope.

is…is that a joke? Someone speaks out about their struggle and this is your response? God help the people in your life.

The audacity of some people, she has a PhD in Physics and was an amazing professor when I had her.

Why is it so wrong for the poster to suggest she find a job? While teaching may be difficult to get back into right away, there are plenty of albeit simple, yet completely valid jobs out there for one to apply to. Asking for help is very had to do and I think it’s great Angela is seeking it but at the end of the day, at some point we must all pull ourselves up by our bootstraps and be adults and suck it up and solve things on our own. I see nothing wrong with suggesting she find a… Read more »

Because they said it in a negative tone, ignoring everything she just said. YOU try being homeless and finding a job. I admire her strength and courage to ask for help when she truly needs it. Yes, she should find a job so that she may be stable and secure and won’t have to depend on others. And as a side note, even if she got any old job, she’d still have to wait until she got her first paycheck to buy something which probably wouldn’t be enough to get her off the streets. She’s not asking people to fund… Read more »

Maybe transitioning was a mistake?? Maybe he shouldve dealt with his work, life, housing, all those other things instead of trying to make himself into something he can never be.. a woman!

I think she’d prefer if you referred to her as a woman…what she is!