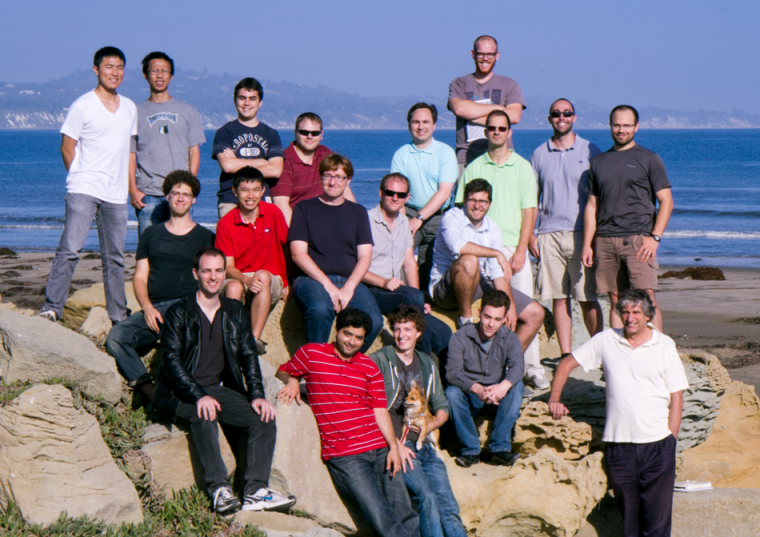 In a group effort led by physics professor John Martinis with researchers from UCSB and Google, a link between quantum and classical mechanics was discovered while in the early stages of constructing a quantum computer. Courtesy of UCSB Department of Physics

Hearing the word “physics” evokes images of Isaac Newton sitting below a tree and coming up with his three laws of motion. Other images include heat transfer in thermodynamics and magnets; all things we can see happening.

However, when applied to much smaller objects that we cannot see, like atoms, classical physics cannot accurately explain what is happening. Instead, scientists began to look into a new branch of physics: quantum mechanics. Twentieth century physicists like Maxwell Planck and Albert Einstein dedicated their research to this field, and present-day researchers are still on the hunt to find a connection between the world we see and the world we cannot.

With the goal of constructing a quantum computer, researchers at UCSB and Google have found a surprising link that connects these two distinct laws of nature. As a result of their findings, the group found that both types of physics are driving forces for the thermalization, the process of physical bodies reaching thermal equilibrium through mutual contact.

“A simple example of thermalization is what happens when you pour cream into a cup of coffee. The coffee becomes a little colder and the cream disperses throughout the coffee. It turns out that these very familiar phenomena are actually driven by some exotic physics,” said Charles Neill, a researcher in a group led by UCSB physics professor John Martinis.

Aside from thermalization, aspects from each branch are more closely related than originally thought, specifically, the classical concept of chaos theory and the quantum concept of entanglement.

Chaos theory is the field of study in mathematics that studies the behavior of complex systems that are highly sensitive to changes in conditions. A common example is the butterfly effect where small changes in the present can lead to a catastrophic future.

Entanglement, as explained by Neill,  is one of the most unique features of quantum physics.

“Let’s say I have two classical bits. If I tell you the first bit is zero and the second bit is one, then I’ve told you everything there is to know about the two bit,” Neill said.

“There’s actually way more information contained in a collection of quantum bits than just what can be known about the individual bits. Systems where this is true are what we call entangled and are a huge resource for quantum computing,” Neill said.

As such, Neill agrees that fundamental physics problems involving chaos, entanglement and thermalization are promising directions to take research.

To search for a connection between chaos and entanglement, the researchers had to begin by designing and building a chip with a few quantum bits, also known as qubits. The qubit chip was then cooled to temperatures near absolute zero. Afterward, Neill was able to manipulate the qubits into behaving like a quantum version of a classical spinning top.

From the experiment, researchers were able to deduce that the process of thermalization was the link between these two concepts as almost all systems, whether classical or quantum, will thermalize.

Additionally, Neills said, “In classical physics, chaotic motion drives a system to approach thermal equilibrium. In quantum physics, entanglement between particles is what allows the system to thermalize. It’s in this sense that chaos and entanglement are connected; they both drive thermalization.”

With these findings, the research group has additional plans to experiment with this connection.