When I’m at UCSB, I spend my weekend days working in an evolutionary yeast lab on campus run by Stephen Proulx, Ph.D., of the EEMB department. My weekend nights are spent either along the loop enjoying some beers with friends or in the comfort of my apartment with my roommate, some pirated episodes of “Jeopardy!” and a bottle of cab sauv. Given my interests in microbiology and drinking, as well as the fact that summer was sure to come with some extra time for activities, I thought brewing my own hard apple cider would be a great dear-lord-save-me-from-the-boredom-of-my-hometown project. So, readers, instead of getting shwasted (shitfaced and wasted) this summer, let me help you get skwasted (scientifically knowledgeable and wasted). 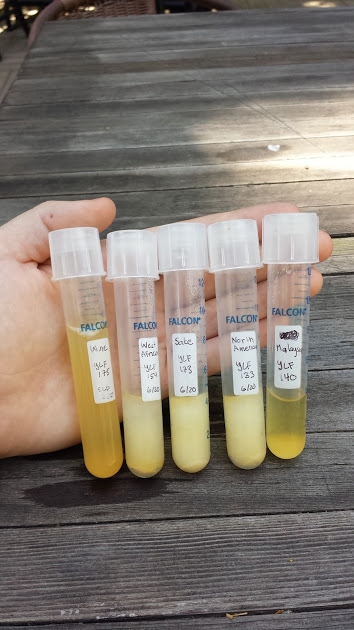 It should be known that the Proulx (rhymes with “brew” in case you’re wondering) lab specifically studies the yeast Saccharomyces cerevisiae, the species most commonly used to ferment beer, wine and bread or, in other words, all the good stuff. In my last few weeks on campus, I spent my free time combing the lab for strains we had isolated from local oak trees (fun) and whiffing countless petri dishes to see which smelled most enticing (not that fun). In the end, I came home with six culture tubes including strains used to make sake and wine; strains from North America, West Africa and Malaysia; and one lone strain isolated by us lab workers from Auburn, California. I chose the latter for my first brew, hoping for less lab-acclimated and more resilient, adaptable cells. If you don’t have access to a lab full of S. cerevisiae, make sure you purchase brewer’s yeast (not baker’s) online or at your local brew shop or even supermarket.

In the weeks following, I ordered some equipment, namely a plug and unidirectional airlock, some sterilizing solution, dextrose, bottles, an auto-siphon and a bottling wand, all of which I will explain the use of as they are needed in the process. While waiting for my goodies to arrive, I did some thorough research on home brewing and wrote up an intricate recipe with detailed instructions for myself to follow. Of course, when my plug and airlock arrived in the mail, I became too impatient to follow my own advice and pitched my yeast into a glass gallon jug of apple cider with no inhibitions. The only precaution I took was to allow the yeast to acclimate to the sugar concentration of apple cider in a culture tube for at least seven generations (~14 hours) before tossing it in. Other than that, I dumped in a bit of apple juice concentrate, boiled my stopper and put some moonshine in my airlock for sterility and then slapped them on without another thought. Although, it is important to note that not just any cider will work; your starting cider can be the fresh-pressed stuff from an orchard (although there may be some natural apple yeast already in there from the machinery), unpasteurized store-bought or pasteurized but non-preservative store-bought. I used Santa Cruz organic. 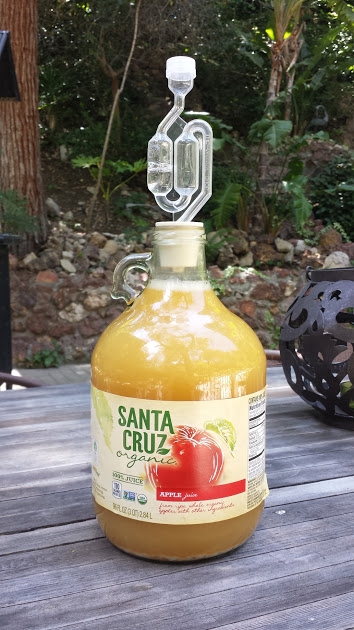 “Why add apple juice concentrate?” you may be asking yourself. Well, here’s where we start getting into science. The way beer, wine and hard cider is made is through fermentation of sugars usually carried out by yeast. These microscopic organisms basically eat sugar and poop out alcohol and carbon dioxide. So, the more sugar I start with, the more the yeast metabolize and the more alcohol I end up with. Depending on the brand, apple cider fermented on its own will yield an end product with 3.5-4.5 percent ABV. Adding in three ounces of apple juice concentrate will raise that to 5-6 percent and will provide a more distinctly apple-y brew. Adding another half cup of brown sugar (incorporated as a simple syrup, preferably) will spike that up to 7-8 percent ABV, but anything more than that means you’re making apple wine, which requires more research on your part as I know nothing on the subject.

You may also be asking “What is an airlock?” This is a handy contraption that lets air out, but not in. In theory, you could make an airlock by sticking a bendy straw into your cider and taping off any open space around the lid, then attaching another bendy straw to the end of the first and sticking the second end into a cup of water. The idea is that the carbon dioxide will bubble out through the bendy straw into the water, but no contaminants will come in through the straws. I personally opted to get two plugs and two airlocks for around six bucks on Amazon, but feel free to get crafty, though it may compromise sterility. Do, however, make sure to make some sort of way for CO2 to escape, otherwise you’re brewing a pressure bomb.

In any case, according to my research, my cider should have been bubbling away and reaching the krausen stage — aka forming a foamy head — in a matter of hours (anywhere from two to 48 to be exact). Unfortunately, this was not happening. A few days in, if I disturbed the cider, I could see a bit of pressure building in my fermentation cap’s U-tube, but it was not what I had been hoping for. A week and a half later, just when I was about to give up hope, alas! I was getting two bubbles a second in my U-tube and krausen stage had been reached! Presumably, the reason for this is that most home brewers use packets of highly concentrated, dry fast-acting yeast. I had used a few milligrams of yeast slurry (wet, active cells), so it took quite some time for the population size to get up to snuff for noticeable fermentation to finally happen. Anyway, at this, I got so excited that I went out and bought another gallon of cider to try the wine strain on.

The Proulx Brew: Thomasson Oak Edition, as I’ve since named my first gallon, will need to keep bubbling away for a week or two before I can begin second fermentation, during which the cider will mellow. By August, I hope to have led you through the majestic journey and rollercoaster of emotions that is home brewing and to have perhaps inspired a few of you legal readers to start a project of your own. Until then, enjoy your summer and enjoy some brews, brewers.