Lightning in a Bottle’s home of Bradley, CA reported a population of a whopping 93 inhabitants in 2010, which seems like a gross overestimation for this “town” that had no housing structures visible from the festival grounds for miles in any direction. In fact, the only discernible touch of people in this desert municipality were the attendees and everything else that the festival brought with it. 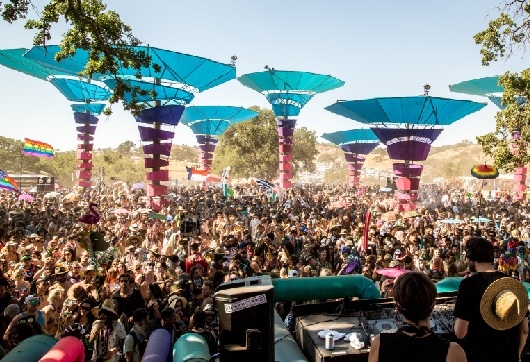 Courtesy of Connie Ha via The Confluence

It is easy to make the mistake of calling Lightning a music festival because the bill is topped by big names like Chet Faker, Grimes and Jamie xx. It’s easy to call it a rave because the lineup is dominated by dance music. The very clever branding by festival organizer Do LaB allows Lightning in a Bottle to avoid being categorized among these more familiar festival archetypes by passing the festival off as an “experience,” which focuses on the building of a virtuous artistically-minded community. And Do LaB is pretty successful at making attendees buy into the message.

However, even if you’re skeptical of the ability of David Bowie tribute yoga sessions to bring world peace, people were nicer at this festival than any other Insomniac, HARD or Goldenvoice event I’ve attended. Every hour of the day from noon to 2 a.m., the three narrow bridges which need to be crossed to pass between stages transformed into perpetual high-five machines fueled by smiling revelers going in opposite directions. If at any point of the day I was wandering through the festival alone, strangers would hail me into their camp to offer me food, drinks and a warm conversation. I am usually put off by the overly saccharine peace, love, unity and respect (aka PLUR) sentiments that are ubiquitous at raves, but at Lightning, these small gestures of kindness struck me as inexplicably more genuine than similar encounters at raves.

With its beautifully disorganized camp structures, lack of security staff, numerous murals and art installations and the attendees’ elaborate costuming, Lightning in a Bottle often felt like it was doing its best to manufacture the soul of Burning Man, to which it often draws comparisons. Unsurprisingly, aside from the aforementioned headliners, the musical lineup very closely reflected this yearn to be Burning Man Jr., with the bill populated almost exclusively by artists somewhere on the house or bass music spectrum — genres anthemic to Burners — with intermittent pepperings of chillwave and techno. For those whose tastes lean toward heavier dance music disciplines this is a good festival. Additionally, the lineup uniformly featured artists that were either highly talented disc jockeys or had other exciting live components, which can sometimes be difficult to find at popular electronic festivals.

This was perhaps most true for Jamie xx who gave a standout performance, closing out the main stage on Saturday night with a spectacular sans-laptop DJ set utilizing only two vinyl turntables, a mixer and two effects pads. His mixing was spectacular in its expert beat-matching, carefully-timed alternation between high and low energy tracks and analog sampling of decades-old soul and industrial house tracks. The set offered both technical perfection and high attentiveness to mood guidance, with the only blemishes occurring when a single record skipped due to a scratch on the vinyl and when an incredibly inebriated attendee comically attempted to hug Jamie and then scratch the turntables before guards forcibly removed the man.

Despite brilliant performances from Jamie xx, Raury Hayden James and the outpouring of affection of nearly every stranger I encountered, Lightning in a Bottle was simply good. Half of Lightning in a Bottle is the workshops. I can’t buy the “Lightning in a Bottle changed my life” mantra espoused in nearly every other conversation because of the curated workshops like “Flat Earth Panel” or Dr. John Bergman’s “How to Flourish in a Medical System based on False Science.” As you might have expected, the “Flat Earth Panel” was a flat Earth theory advocacy workshop, which anyone who has ever been in a plane will know is bullshit (disregard the pictures of the Earth from space). As you might not have expected, Bergman’s workshop was not about a proactive approach to health involving dietary and fitness education, but rather about the poisonous qualities of vaccines and other pharmaceuticals. Fine, bash pharmaceuticals. Anti-vaccination fear-mongering is the reason that measles — a disease for which pharmaceutical prevention exists — has made a resurgence in the U.S.

Some of the sex, romance, meditation and kitchen workshops were fantastic. However, to say that these anti-science workshops trouble this idyllic image of Lightning in a Bottle as a spiritual paradise would be very magnanimous. Ignorance is antithetical to spirituality. The fact that Dream Rockwell is the same person that pays speakers to cast deconstructive scientific facts and also designed the very marketable “Lightning in a Bottle will change your life” image makes the whole vibe feel artificial and calculated.

Lightning in a Bottle is fun. It’s different from Governor’s Ball, Outside Lands, HARD Summer or EDC. It’s a place where you can go dance to great music. You can meditate or play a friendly game of giant skee ball tournaments. I’ve never been offered more gifts by strangers at any of the numerous events I’ve attended. It’s not trying to be Coachella, but it’s not above it either. Be skeptical when people tell you lofty spiritual enlightenment stories about this festival. It’s for good music. It’s good for partying. It’s not some place to reach nirvana, and its use of workshops as a place to spread dogma is incredibly dangerous.