The Daily Nexus
Science & Tech
Desalination Plant To Reopen Next Fall
June 23, 2016 at 5:02 pm by Stephanie Pernett and Karan Maitra

As UC Santa Barbara students head home after their finals, many will return to California cities that are currently experiencing temperatures exceeding 95° F. Santa Barbara and Goleta have been fortunate to have cool, mild weather during finals week, but conditions in the rest of the state are far from picturesque. 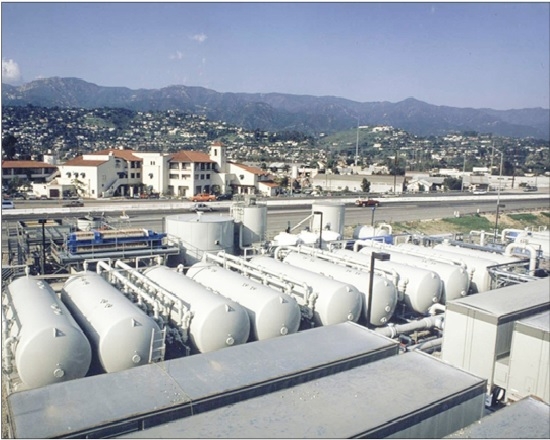 On May 5, 2015, the Santa Barbara City Council declared a stage three drought condition. This required a 35 percent citywide reduction in overall water use. To account for this and prior restrictions, the city decided to reopen the Charles E. Meyer Desalination Plant, set to begin operation by October 2016.

The desalination plant was originally created in the 1980s when the district was facing massive supply shortages for potable water. It operated between March and June of 1992, but due to significant winter rainfall in the years following 1991, it was put on standby mode as the drought condition was alleviated. Rainfall has been inconsistent in the past five years, however, and the supply of potable water is dangerously low.

The capital cost in reactivating the facility is estimated to be $55 million. Once it is opened, the annual operating cost is estimated to be near $4.1 million. During rainy seasons, groundwater sources replenish so the plant can be put into standby mode, reducing the cost to $1.4 million.

“My estimate [of desalinated water] is maybe twice as expensive as traditional water sources,” Hugo Loaiciga, professor of environmental studies at UCSB and former water commissioner for the City of Santa Barbara, said. 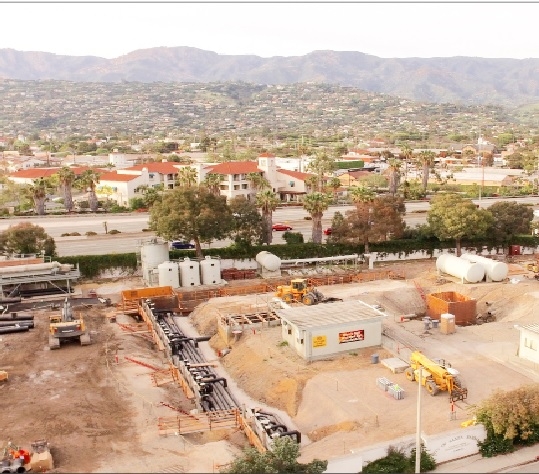 An aerial view of the desalination plant after it was demolished is shown above. The plant is expected to provide 30 percent of Santa Barbara’s water demand once it is opened in October 2016. Courtesy of santabarbaraca.gov

To fund a project of this magnitude, the city has taken out a State Revolving Fund loan. This loan is for the specific purpose of providing low-interest loans for investments in water and sanitation infrastructure such as sewage treatment, stormwater management facilities and drinking water treatment.

According to Loaiciga, drought conditions have remained the same in the past few years. Northern and Central California are not currently experiencing a dry season, but Santa Barbara, Los Angeles, San Diego and other Southern California cities are still suffering from drought conditions.

“It’s not necessarily getting progressively worse, but it has been five consecutive years of dry conditions,” Loaiciga said. “Every year added, it makes things worse. The groundwater basin is lower and has remained very low for the past five years.”

Desalination is notorious for being an energy extensive process; however, the plant will use 40 percent less energy than its original design, reducing its electricity demand along with its carbon footprint.

According to Loaiciga, in some parts of the world, where desalination is a major water source for obtaining water, cities use renewable energy such as solar energy to keep their plants running without affecting the environment too much.

Santa Barbara’s policy only allows desalinated water to be used during droughts. However, due to special permits, the plant can be operating even without a drought.

“Desalination has a role in meeting future water needs, although it should be pursued only in the face of diligent water conservation,” Joshua Haggmark, water resources manager for the city, said.

Aside from energy consumption, environmental groups such as the Santa Barbara Channelkeeper have previously taken issue with the plant’s method of obtaining water. The desalination plant currently uses a system called open ocean intake. Pipes in open water are equipped with wedge-wired screens that take in ocean water and deposit it to the plant, but this poses as a potential hazard to small marine life that can pass through the wiring.

An alternative to open ocean intake is subsurface intake, in which pipes are installed under the ocean floor to use sand as a natural filter.

A study conducted by the city, however, ruled this method out as infeasible due to several factors, including its impact to sensitive habitats and insufficient water production.

Once the drought subsides and groundwater supplies have recovered, the city council will consider using desalinated water as a part of the city’s Long-Term Water Supply Plan. Haggmark agrees that this is the best plan.

“The severity of this drought has really been a game changer and a paradigm shift in the city’s water supply planning,” Haggmark said.

The facility is expected to produce three million gallons of water per day, meeting 30 percent of the city’s water supply. In addition to Santa Barbara, Montecito and Goleta will also be receiving water from the plant.

While the drought is the reason behind the reactivation of the desalination plant, the City Council expects to engage in a policy discussion to include desalination as part of the Long-Term Water Supply Plan. It may strain the environment and municipal funds, but as a relatively new technology it has the potential of relieving water scarcity by using an almost indispensable supply of water.

Shouldn’t the headline say “this Fall” not “next Fall?”

Since Fall for 2016 hasn’t started yet, “this Fall” and “next Fall” are equivalent. This Fall, which is the Fall of 2016, is the next Fall season that the northern hemisphere will experience.

Putting the intake under ground would have been a better idea since it is only a matter of time before one of those Oil rigs has another accident and they use “dispersants” to sink it to the ocean floor. They better think twice before putting one these in the Gulf of Mexico. In typical goberment fashion they think only about the immediate future and their financial dollar.

Subsurface ocean intakes are prohibitively expensive to construct. As the article mentions, the city investigated that method but found it to not be feasible, both due to costs and to increased environmental impacts.