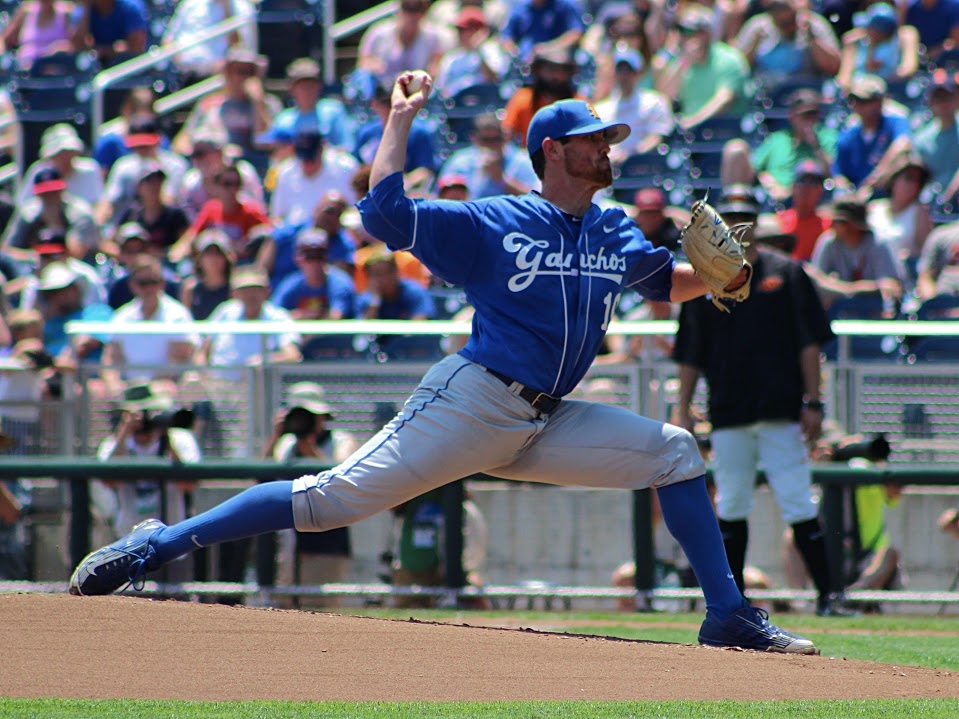 Two days after eliminating Miami from the College World Series, the UC Santa Barbara baseball team suffered the same fate after Arizona shut them out 3-0 in Wednesday night’s elimination match.

Santa Barbara’s season ends with a final record of 43-20-1. The 43 wins are now the most wins against Division 1 opponents in a single season for the Gauchos. They also won seven postseason games, which is more than they had won in their previous seven trips combined.

Arizona improves to 46-22 on the season and will face Oklahoma State on Friday night. The Wildcats will need to defeat the Cowboys twice in order to advance to the College World Series championship, while Oklahoma State just needs one victory to advance.

It was another tough day for UCSB as for the second time in the last three games it was shutout and held to single digit hits. In the end, the combination of Arizona pitchers JC Cloney and Cameron Ming proved to be too much as they combined to allow six hits and no runs on the evening.

It was also a tough outing for redshirt senior pitcher Justin Kelly, who only pitched three innings but allowed seven hits and all three earned runs. It was Kelly’s first start since opening weekend of the season. Though it was not the senior’s best outing of his career, it certainly was not from a lack of effort.

Another senior on the Wildcats, Ryan Aguilar, started the scoring for his team by hitting a sac fly RBI in the third inning with one out. Then sophomore Jared Oliva came to the plate and knocked it out of the ballpark for a two run homer giving Arizona a 3-0 lead after the third.

Offensively, the Gauchos were able to scatter singles here and there throughout the nine innings, but not with enough consistency in a single frame to score a run. No Santa Barbara hitter was able to register more than one hit on the evening.

Relieving Kelly was right-hander Trevor Bettencourt who pitched a great game and kept UCSB in it right until the very end. The junior went five innings allowing only one hit, no runs while managing five strikeouts. At one point, Bettencourt had retired 13 consecutive batters.

In the final frame, Santa Barbara had its best chance to break through as sophomore Clay Fisher had a lead-off double, followed by a redshirt junior Devon Gradford walk, which put the tying run at the plate with no outs.

However, on this night there was no magical finish. There was no game-saving home run, and there was no win. Ming, a sophomore, put away the Gauchos for good, striking out the final three batters, sophomore first baseman Austin Bush, and redshirt sophomores, second baseman JJ Muno, and catcher Dempsey Grover, in succession to seal the 3-0 win for Arizona.

Those three batters at the plate for Santa Barbara with a chance to tie the game could not have been any better. Bush leads the team in home runs, Muno is an extra base hit machine and Grover consistently is able to get on base, but this night belonged to Arizona. All three put up good at-bats but the pitching from Ming proved to be too much.

When the match ended, UCSB finally felt what it had done to Xavier, Louisville and Miami: the feeling of being eliminated. The team that was consistently seen smiling and having fun in the dugout now had the look of melancholy as the reality of their ended season set in.

Even with the loss, the feats accomplished this entire season should not be forgotten. Eliminating the No. 2 and No. 3 seed in this tournament, making its first Super Regional, going to Omaha for the first time, winning a game in the College World Series; this and more made this UCSB baseball season one for the record books and gave hope to a bright future.

Although the season is over, and now the Gauchos must look to next year, it was still amazing to see this team defy all odds and reach Omaha when at the beginning no one, not even some of the players, even expected to make a regional.

After 22 long days on the road, its time for UCSB to come home. Although players and coaches would’ve liked to stay a bit longer, their time is up , and it’s time to go back to the drawing board and figure out a plan for next season.