I won’t pretend that I fully understand how American elections work. They’re bloody complicated! No matter how many explanatory YouTube videos I’ve watched and despite all the political science classes I’ve taken, I’m constantly flabbergasted by how vast and varied the USA’s political process is. And if most Americans are being honest, they’re in the same boat as me. It’s considered “American” to hate our politicians (the less political experience they have, the better), and most of us don’t even identify with a particular party. As voting day for the California primaries — Tuesday, June 7 — rapidly approaches, this leaves people like us with two options:

After all, “your vote doesn’t even count,” right? Besides, according to the greatest social commentary show of all time, “South Park,” every election is basically just a contest between another “turd sandwich” and a “giant douche.” So the next time you see a clipboard-wielding Arbor activist screaming at you to vote (for their agenda), you either stick your earphones deeper into your skull and crank up the volume or just flip them off outright. You then spend the next few years bitching on Facebook about why things in America suck.

2) You stop bitching, you educate yourself, and you vote!

Why on earth would anyone take Option #2 over Option #1? It takes time and effort to study up on candidates and physically vote; don’t we college kids have more important things to do, like complain about finals while spending a good chunk of our study-time actually just procrastinating on Netflix or social media? Who wants to spend another hour in the library to study up on who’s running for what in California when you could just crush pitchers at Woodstocks? Why not just post your political beliefs on Facebook instead?

As best screamed in a metal song called “Antivist”: “If you really believe in the words that you preach, then get off your screens and up to the streets!” Either participate in your democracy or stop bitching; it’s really that simple. Here are three basic reasons to vote on Tuesday, June 7:

Ok, I’m sorry. My subheading, “at stake,” may sound a bit alarmist. However, take a second to consider how many great countries and civilizations have fallen throughout world history; let’s not fall into the trap of thinking that our nation will simply survive forever without strong leadership. The United States is still a relatively “young” country, and we are still defining our role in a globalized world of multilateralism and unipolarity. 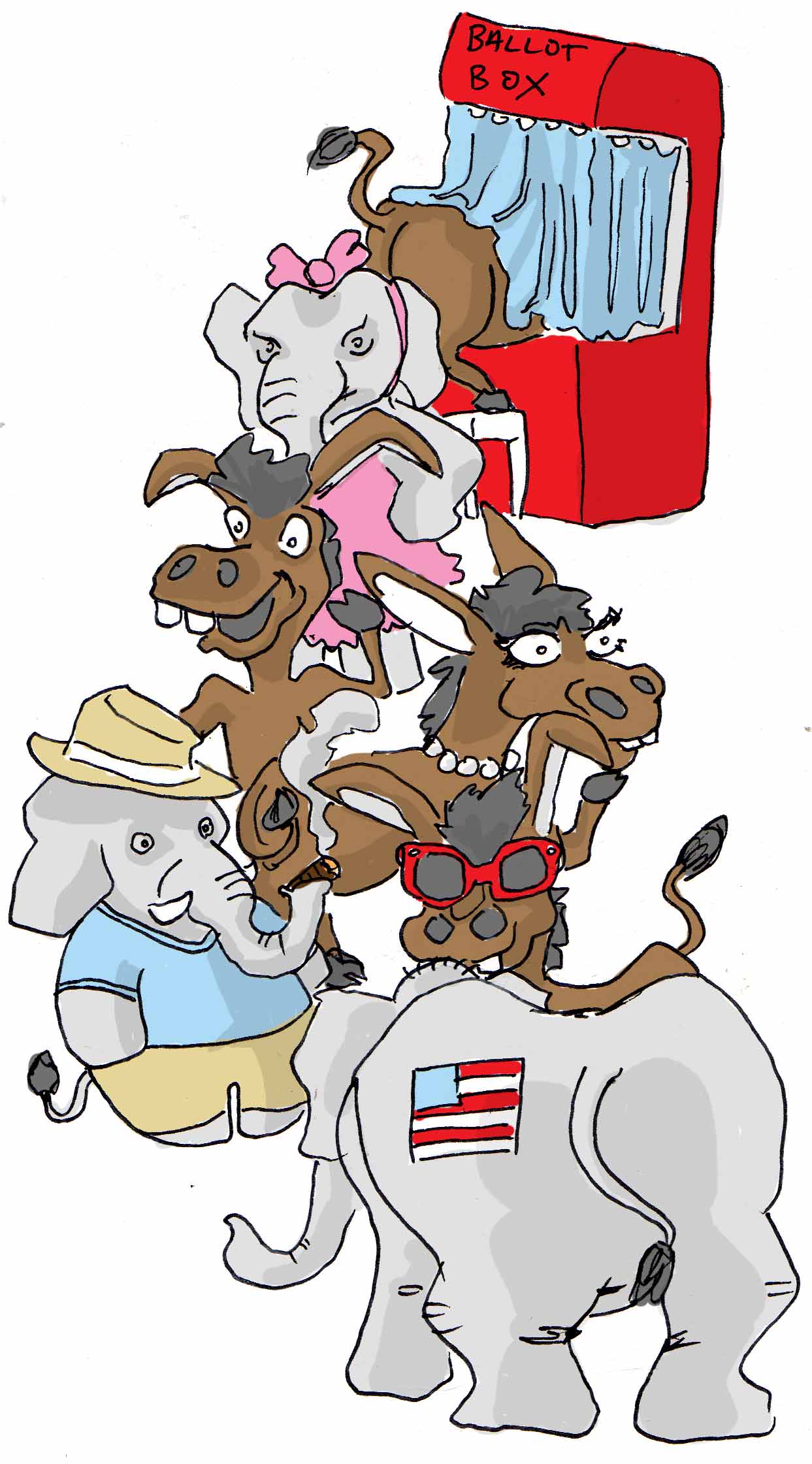 We must approach each day, in addition to each election season, as a potential for American success or catastrophe. The United States is currently the most powerful country in the history of the world; this naturally presents us with many enemies and larger problems to solve. We must be mindful of these issues and we, as engaged American citizens, must use our voices to respond to such challenges with reason.

Let’s focus on the presidential election since that’s the only election that people seem to care about these days. I can’t think of two more radically different people than Donald Trump and Bernie Sanders. both have radically different platforms, personalities and visions for America; the decisions that they make in office will change your kids’ history books.

While most of their radically contrasting domestic policies will probably not pass through Congress, their foreign policies can still happen whether Congress approves them or not.

Frustrated with their inability to affect change at home, the last few U.S. presidents have been successfully expanding their power in the foreign policy department. This trend won’t stop anytime soon, and this is why I think we must strongly evaluate the foreign policy platforms of our presidential candidates.

So when Trump talks about torturing the families of (suspected) terrorists or bombing the #*$& out of ISIL-controlled territory (cities with large civilian populations), you’d better believe that this can actually happen — Constitutional or not — and that the world will view the United States much, much differently.

When Bernie Sanders talks about pulling us out of international conflict — whether this means that the UN may lose its American-backed ability to enforce humanitarian intervention or that our Kurdish allies in Iraq will eradicated without U.S. support — you should accept than this can happen, too. The President’s real power lies abroad, so keep that in mind when you vote (or don’t vote).

If you don’t identify with any of the Democrat or Republican candidates, I challenge you to vote for a third party. Yeah, they probably won’t win, but at least your vote will be paving the way for a future in which third parties have a voice.

The reason we don’t have enough moderates in government — a chief reason why Americans hate politics so much — is because independent moderates spend more time complaining about the system then actually voting for moderate people (or third parties).You don’t have to be a huge liberal or staunch conservative to be a “politically active person;” if polarizing folks are the only ones showing up to vote, then we are only going to get more polarizing politicians like Hillary Clinton or Donald Trump. Dare to be different.

That little checkbox is a small reason why America does not have the same problems that Syria under Assad does; without that check box, there would be violence in the streets

Right now is a pretty pivotal point in our college community’s history; if you haven’t noticed the “I.V. Self Governance Initiative” campaign, former A.S. President Jonathan Abboud and others have been working tirelessly to give the Isla Vista community a stronger voice in Santa Barbara County.

If you’ve ever struggled to find parking, got pissed off by all the new buildings blocking your ocean/mountain views (which you pay extra rent for) or been taken advantage of by I.V. landlords, then you should probably vote for a county supervisor that recognizes your needs. If you care more about the future of job creation in Santa Barbara itself so that students can find employment in this beautiful place after graduating, then vote for a political representative who can deliver on that promise.

For the longest time, several SB politicians have overlooked us and assumed Isla Vistans to be a bunch of stupid, stoned college kids who don’t care about anything locally because we are either too busy with our own lives or leaving the area after college. You may be turned off from the presidential election — me too — but don’t forget that SB County elections are coming up, and you can vote for positive change in Isla Vista.

Yup, I’m going there! It’s your civic duty to vote, and even if your little mark in a checkbox might not have any further impact on your life, you need to understand how special that little checkbox is. That little checkbox is a small reason why America does not have the same problems that Syria under Assad does; without that check box, there would be violence in the streets — political violence often arises when democratic means are nonexistent — and easy tyranny by our own government.

People have dedicated their entire lives to make sure you could fill in that checkbox regardless of your gender, ethnicity or social status. If you still don’t see how unique your democratic rights are, you’re either ignorant of world history or just don’t care about the work that others have put into giving you a voice. Your voice as a “regular person” (non-delegate) may be small, but it’s still something, and something is better than nothing. Voting may just feel like a formality, but it’s an important formality.

The California primaries are tomorrow (Tuesday, June 7). If you’re an American citizen, then get off your couch and vote, or stop bitching!

Generic argument that adds nothing new to the formula. I’m going to vote but even if I didn’t I have a right to complain about the lack of democracy. Voting hardly gives the voter a voice, especially when it comes to representative. Furthermore, voting is hardly the only way to get one’s voice heard. Maybe consider the nuances before impulsively writing repeating what everyone has heard.

1.) I already acknowledged that voting “hardly gives the voter a voice.” Regardless, “it’s still something and something is better than nothing.” 2.) I never said that voting is “the only way to get one’s voice heard.” There are hundreds of other ways to get civically engagaged, from writing Op-Eds to fundraising personally to going on strike. The comments section of a college newspaper however is bleak at best. 3.) “Impulsively writing what everyone has heard.” Perhaps the only thing that many people nowadays hear is that it’s futile to vote for independents or that voting is stupid. This presents… Read more »

How do I vote for ted cruz?