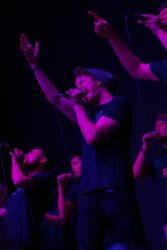 This Saturday, BFOM (Brothas from Otha Mothas), the university’s standout a capella group, hosted their quarterly concert to a sold-out and packed-in I.V. Theater. Hundreds of friends, family members and music aficionados popped squats in the lecture hall, painted moodily with green and purple spotlights, to watch the vocalists pour their insides out with song, fart noises and some emotional tears.

After rushing the stage rambunctiously, the boys of BFOM goofed around as president and emcee Mason Sperling introduced the night and its talent show theme, which carried through the interstitial vignettes of board-chopping, celebrity impression-ing and some seriously impressive breakneck beatboxing courtesy of resident vocal percussionist Kyle Collet. 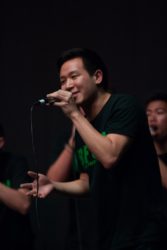 Alex Fong singing part of the solo for “The Circle of Life.” Stephen Manga / Daily Nexus

These talent-displaying skits served to break up the pace between the momentously involved performances BFOM indulged their crowd with. The guys bobbed, rocked and thrusted their arms about as they sang and uttered, taking on the semblance of a complex and powerful machine. They were a ton of spinning and whirring pieces, working together to produce a layered and cohesive sound greater than the sum of its parts.

They started up their set on an arresting note: that of the iconic Zulu wail of The Lion King’s “Circle of Life.” They shut it down with the song, culminating its performance by lifting its lead, Alex Fong, into the air like Simba to deliver the final line at the top of his lungs. Other set highlights included second-year Isaiah Egan’s playful rendition of “I’m a Believer” (by The Monkees, not Smashmouth) and an amped cover of “Let’s Get It Started” led by Casey Hayes (“that guy from the bookstore!”), which reminded everyone how real the Black Eyed Peas were a decade ago. And they kept runnin’, runnin’ right into the heartfelt climax of their show, when they bid goodbye to their senior members with gifts, memories and some stellar solo numbers. 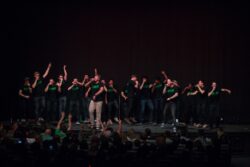 BFOM getting hyped during their hit arrangement of “Let’s Get It Started.” Stephen Manga / Daily Nexus

This segment started off focused on Adam Proctor, with an aptly moving “Come Sail Away” (originally by Styx). As his friends and companions around him built up to the song’s crescendo with their utters, gasps and hums, the lyrics he belted captured the unsure beauty and fear the world at large represents for departing seniors. Collet followed as the pink spotlights dimmed to Lee Brice’s “I Don’t Dance,” which he dedicated to his girlfriend in the audience; he didn’t take his eyes off her the entire time. Sperling gave his absolute all to Aerosmith’s “Dream On,” audibly sad to be leaving the home he’s made with the group yet passionately motivated by his pursuit of his own dreams in the entertainment industry (the boys gifted him with a custom BFOM director’s chair). Finally, David Fowler triumphantly declared “We Are the Champions” with the legendary Queen jam, hitting both high notes and his ambitions: Fowler is moving onto a professional career in a capella. 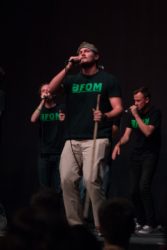 Though for most BFOMers, senior year marks their last opportunity to be involved with something they love so much. This sentiment marked the tears the members shed as they spoke to the audience about their graduating partners, as did their shared memories of befriending and performing with them. Said visiting USF second-year Kian Sheik, who teared up at these earnest sendoffs, “It reminded me of robotics, something I loved to do in high school but will probably never do again.” While graduation will always be one of the most bittersweet events we’ll experience as we leave some things behind and take on a world of new ones, take a page out of BFOM’s goofy, passionate and absurdly talented book and remember to dream on; dream until your dreams come true.