The Daily Nexus
Music
Shwayze Buzzes at Surfrider Show
May 26, 2016 at 9:32 am by Max Pasion-Gonzales 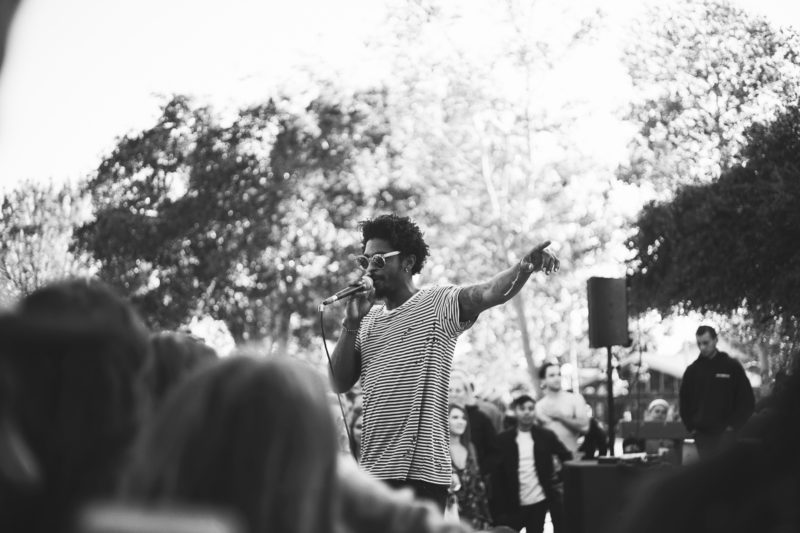 The performances at Anisq’Oyo Park are usually host to some nice relaxing bands that reflect the laid-back spirit of Isla Vista. Saturday’s musical festivities were of a similar nature, until rapper Shwayze took the stage and livened up the place.

This past Saturday, the Isla Vista chapter of the Surfrider Foundatio held their annual Concert for the Coast. The event featured booths with information about beach care and raffle prizes with proceeds going to Gaviota Coast preservation, and, of course, a free concert with Shwayze as the headliner. Audience size fluctuated throughout, but relaxing Gauchos filled Anisq’Oyo for the whole day, and the event functioned as a nice escape from the upcoming stress of finals.

Before Shwayze’s grand entrance, some alternative reggae bands warmed up the crowd. Cali Conscious, Rebel Shakedown, Layovr and West Swell, which consisted of some UCSB alumni and current students, were among the opening acts. These local talents created a sense of community among the park with their original anthems of Santa Barbara life. Their free-spirited beach vibes mixed perfectly with the shining sun and had the audience in high spirits. There were some familiar tunes in the air as well, as Layovr provided a nice Bob Marley medley and a cover of MGMT’s “Electric Feel,” and West Swell covered “Valerie” by Amy Winehouse and performed a mashup of Drake hits.

The typical widespread seated crowd of the park was quickly moved up to their feet around the stage as soon as Shwayze was set to make his appearance. His DJ came out first and offered the crowd their first chance to get “Shwaysted” with some EDM before the man of the hour officially performed. Although his opening track, a Bob Marley EDM remix, came off as slightly tasteless, the following hard-hitting drops effectively conditioned the crowd for the fun night to come.

Shwayze finally hit the stage at around 6 p.m. and the crowd reacted with appropriate energy (to say the least). He was accompanied on stage by the aforementioned DJ, as well as his hype-man/five-year-old son, Hendrix. Hendrix mainly just played around the stage as his dad performed, and occasionally was picked up to help mouth some of the lyrics. Although Shwayze made it a point to take hits from the various joints burning in the crowd as well as to continually remind them to “light up,” he often comically covered his mouth and watched his language when his son was listening.

The young rapper’s set list consisted of tracks spanning throughout his career, including songs from his self-titled debut album as well as his most recent work “King of the Summer.” One of the most energy-inducing performances of the night included his 2014 hit, “Love is Overrated,” which the audience continually screamed along to. The throwback feel was clearly alive and well as Shwayze jumped around the intimate stage.

The whole crowd was alive with familiar reminiscence as the summer partier performed the first hits of his career, “Buzzin” and “Corona and Lime.” The park knew a surprisingly large amount of the lyrics as the rhymes rung out into the air. Needless to say, because these two songs are essentially the staples of Shwayze’s career, they provided the most rewarding moments of the night. Although jumping and dancing saturated the entirety of the set, the most enjoyment came from his two biggest throwbacks.

In complete transparency, it doesn’t take a music analyst to know that Shwayze doesn’t exactly compare to the other acts that have come to UCSB this year, especially when the show took place a week after the extremely anticipated Extravaganza. However, this event was a raging success for multiple reasons. Firstly, Shwayze can actually put on a hell of a show with a remarkable amount of personality and likeability. Secondly, it was a very heart-warming gathering of hundreds of Gauchos in the name of summer relaxation and quality music. Lastly and certainly not least, the community came together for a good cause — the preservation and protection of local beaches — and raised some good money. Love him or hate him, Shwayze’s here to have a good time, and the crowd was always down to join in.