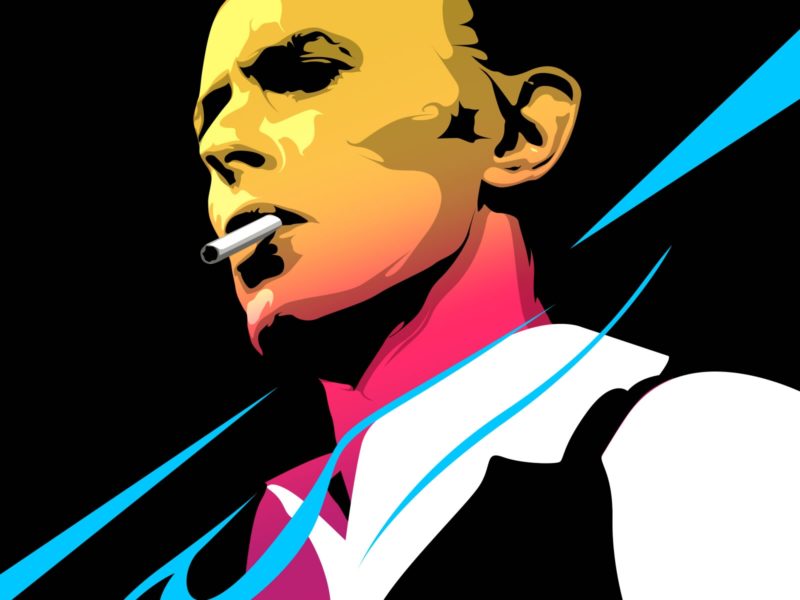 From his presence onstage and on the screen, his memorable lyrics to his impressive vocals, David Bowie influenced multiple decades of music and pop culture with his unique personas, skillful songwriting and overall glam factor. His performances and songs are still iconic today, and new waves of fans continue to admire his music with each generation.

On Thursday night, KCSB presented “Starman Under the Stars,” a tribute to Bowie’s legacy and the wide range of his talents. KCSB advisor and DJ Ted Coe explained, “KCSB has been doing the Sound and Vision series which has incorporated a week of special programing over the airwaves commemorating the life and work of David Bowie.”

Part of the series was a double feature film screening on the lawn of the lagoon to celebrate two films starring the late performer. The first film, met with shouts of excitement, was “Labyrinth.”

With its fairytale story infused with unnerving, gritty imagery, “Labyrinth” is a unique and stylized film that plays with the mysteriousness of fantasy. The film is dripping with ’80s cheesiness from the songs sung by puppets to the teased craziness that is Bowie’s hair. It’s these elements, however, that have made “Labyrinth” an ’80s icon, and no element of the film proves that more than David Bowie himself.

Bowie’s role as the Goblin King perfectly melds the dramatics of his stage performances with the mysterious magic of the fantasy world. Bowie’s first appearance in the film clearly announces his presence as he stands sinisterly in a doorway, arms and dark flowing cape outstretched as thunder cracks behind him. A dusting of sparkles emitting from his direction adds the finishing touch of rock ‘n’ roll magic. Bowie commands each scene he is in with a smooth, confident tone, a calculating gaze and an occasional mysterious smirk that intimidates and beguiles.

Bowie’s music throughout the film creates an otherworldly tone while still maintaining his signature style of rock. “Magic Dance” is catchy and upbeat with bursts of synthesizer and memorable lyrics about the magic and mystical. Bowie’s quick dance moves and taunting attitude showcase delightfully evil antics. “Within You” conveys a much more threatening tone, demonstrating the range of Bowie’s character and his own musical style. The beginning of the song is jarring and ominous, with sharp drum beats and guitar to match the sudden, terrifying appearance of the Goblin King and his quick, determined pace.

The screen isn’t the only place Bowie’s talent shines. His performance in film is only matched by his presence on stage. The next film, “Ziggy Stardust and the Spiders from Mars,” provides a look at Bowie’s eclectic performance style and music. The concert film highlights Bowie’s last performance as his Ziggy Stardust stage persona.

Bowie’s vocal talent is clear in every song. The quick tempo of “Moonage Daydream” is accented by Bowie’s whispery low tones and clear high notes. Members of the audience are shown excitedly singing along as he holds out high notes and speaks toward them during the breaks in his songs. At the end of “Ziggy Stardust,” he pauses dramatically in front of the microphone in silence before belting out the last note of the song in a strong voice that commands attention.

The iconic performances in this film show the unique way Bowie blended theatrics with music. At the beginning of “Time,” he appears with his arms outstretched with long, elegant white sleeves as two people suddenly rip his robe off of him to reveal a skin-tight, elaborately patterned bodysuit complete with a bright blue feather boa. In each song, he engages directly with the audience, pointing toward them dramatically and singing to various people.

Andrew Kenny, a second-year and Bowie fan, said of the film, “I’m glad it wasn’t a normal documentary, because I’ve already seen two on him, so I don’t think there would have been too much new stuff to learn. It was fun to just sit through essentially like an entire concert experience.”

David Bowie remains an important icon in music, movies and performance, and KCSB’s tribute only confirmed the appreciation and admiration of fans of all ages. From the magic of “Labyrinth” to the cool confidence of Ziggy Stardust, Bowie’s range of styles and performances is as impressive as it is entertaining. “Starman Under the Stars” proved that David Bowie is a star that will never fade.