The Daily Nexus
Sports Blogs
#LeahStrong: Strength in Inches
May 23, 2016 at 5:05 am by Elliot Thornton 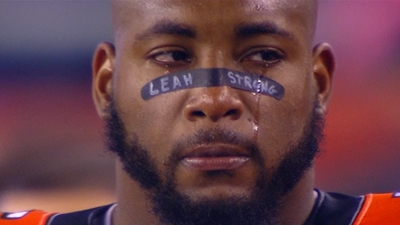 Describe the word strength and a spectrum of definitions will emerge, ranging from one’s physical fortitude, the persistent ability to rise to the occasion in crucial moments or simply the gift of encouragement through life’s hardships.

We often associate this trait with some of the most well respected athletes of our time: those who wear their hearts on their sleeves and dominate their beloved sports, such as LeBron James, Serena Williams or Mike Trout.

While these stars have both the mental and physical tools to reign at the top of their craft, there are other instances in which the term “strength” applies to a much smaller category of individuals.

This group might not match pound-for-pound with these self-proclaimed superstars, yet they contain the same amount of courage and will to fight to be recognized. This unique mold of “strength” fits the character of 6-year-old Leah Still.

A full-time daughter, “Uptown Funk” dancer and cancer survivor, Leah has permeated the hearts of many during her road to recovery. Daughter of current Houston Texan and former Cincinnati Bengal defensive tackle Devon Still, the two have come a long way since their experience of misfortune in June 2014.

The then 4-year-old Leah was diagnosed with stage four neuroblastoma, an aggressive disease which attacked the preschooler’s vital glands and yielded a 50/50 chance of survival. The odds were unfavorably stacked against the NFL player and his daughter.

While tears and agony barely consoled the hearts of her friends and family members, oddly enough the 4-year-old girl took on her challenge with a collected mind and grin on her face.

After undergoing four months of radiation, surgery and remission treatment, results indicated a steady decline of Leah’s harmful tumors. There was no doubt about it: The upbeat child was beating cancer.

Much like his daughter, who faced this dreadful disease head on, Still did not let this alarming setback hinder him from assisting his daughter. He wrote the slogan “Leah Strong” on his nasal strip every time he stepped on the field, and this motto quickly circulated through the nation, making everyone aware that Leah’s fight was bigger than she was.

Fans on and off the gridiron showcased their united support for the 26-year-old Still, including the Bengals organization, Cincinnati Children’s Hospital and New Orleans Saints Head Coach Sean Payton, who bought 1,000 Devon Still jerseys in response to the lineman’s cause. In total, over $1 million were raised for his daughter and other families locked in a similar battle with pediatric cancer.

The brave Leah also received recognition from celebrities at the 2015 Espy Awards. Earning herself the Jimmy V Award, the highest honor for courage and perseverance, Leah officially joined the ranks of sports heroes such as the late Stuart Scott, former Rutgers star Eric LeGrand and Hall of Famer George Karl who have had their medical battles recognized on a grand scale.

A successful triumph over life’s biggest obstacle led young Leah to become the flower girl in her father’s wedding last Sunday. Full of life and energy and ready for the big stage, it was Leah who stole the show on her father’s big day with her moves on the dance floor.

This moment was a celebration of a new chapter in the Still family, but more importantly it signified a celebration of life itself. Leah’s battle with cancer was finally over. She surmounted her biggest obstacle, and that is definitely a moment that everyone could enjoy.

Leah’s story is the story of a little kid with a big heart which warms the minds of many, a girl whose narrative proved to be just as inspiring as those of the athletes we adore today.

On that day of matrimony for Devon Still, his daughter was not just his flower girl. She was a fighter, who persevered and is a living testament to the fact that when life’s struggles try to bring you down, you can still remain strong within.

It is this idea of “strength” that will carry on in Leah Still forever.