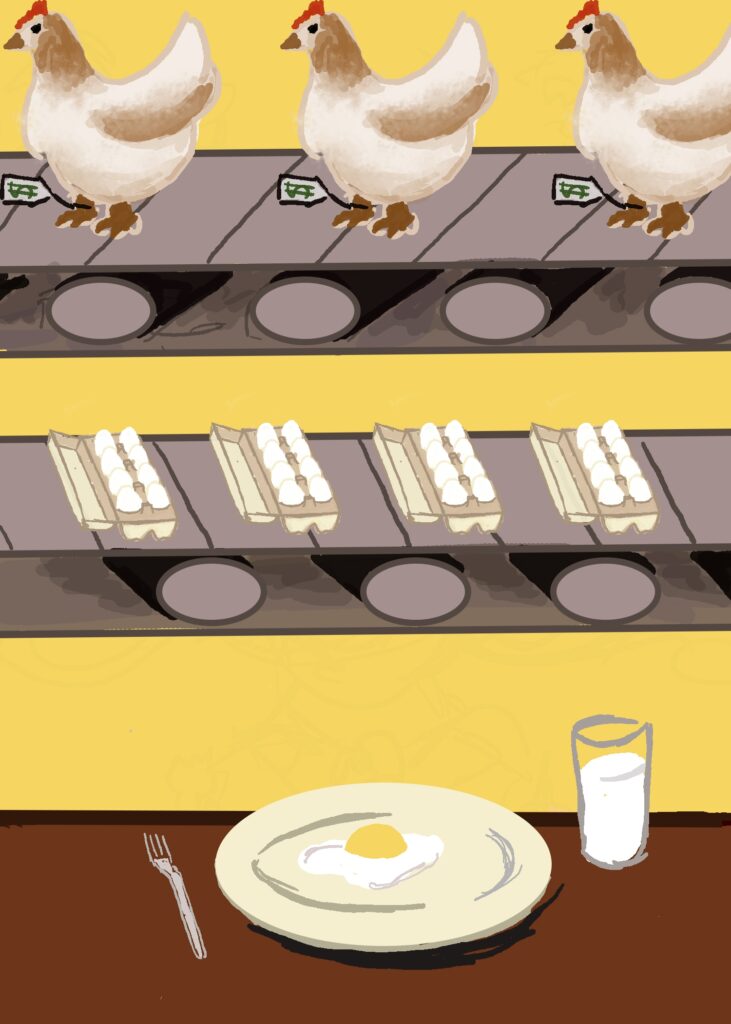 The move toward cruelty-free animal products is due to environmental concerns and meat-related health effects. Sierra Deak / Daily Nexus

UCen Dining catering services will begin a transition to cruelty-free animal products next week by introducing cage-free eggs into their new menu.

According to John Lazarus, assistant director of production and catering for UCen Dining, catering services will soon begin working with Mary’s Global Animal Partnership and conduct regular assessments of how source animals are cared.

Mary’s is a free-range chicken farm that uses Controlled Atmosphere Stunning (CAS) euthanasia for a gentler slaughtering process. CAS slowly drains the oxygen from the birds’ confinement to make their death less stressful before the slaughtering operation.

“It’s cage-free, but it’s a little bit more than cage-free,” Lazarus said. “There’s a bunch of different types of certifications … People go to inspect how the hens are being treated as they’re being raised.”

The move away from factory farms will create higher costs for purchasing food, but Lazarus hopes to convince students and faculty that “it’s an investment worth making” that will lead to better living conditions for farm animals.

“Catering has the ability to absorb prices a little better than the retail units, so we’re really sensitive to not raising prices on a bowl of soup at Coral Tree Café or a sandwich at the Arbor because we know that students are already stretching their money as far as they possibly can,” Lazarus said.

According to Andrew deCoriolis, Farm Forward’s director of strategic programs and engagement, reducing portion sizes will lower the costs of higher quality food and the transition to a more sustainable, vegetarian meal plan can result in less expensive animal products while also ensuring animals lived a decent life before dying.

The total cost comparison between factory farms and cage-free farms is unavailable at this time and will be released in the fall.

Lazarus said that the project was inspired by a variety of concerns, including the environmental impact and health concerns that arise from eating too much meat.

“When you have a bunch of hens raised in a factory farm, it’s incredibly efficient but it also concentrates waste and concentrates byproducts and they’re not allowed to permeate through the soil in a natural way,” Lazarus said.

However, he said the biggest motivation for the project is a “moral obligation” to decrease animal cruelty in the meat and dairy industry.

“It’s not really directly connected to sustainability and nutrition, it’s more about how … we treat animals, and, to me, those are morally equivalent,” Lazarus said.

A California law passed in January 2015 required an increase in space allocation for factory farm chickens. Another law, AB-1437, banned the selling of eggs from chickens raised in small, wire “battery” cages with limited space.

However, Farm Forward and UCen Dining are still concerned with the animals’ living conditions in the factory farm industry, as many factories do not give birds outdoor access, and some slaughter their animals by hanging them upside down and electrocuting them.

According to deCoriolis, over 90 percent of American poultry is raised on factory farms.

“[The program is] led because students and employees are saying [that] ‘we want better products, we want more plants, we want fewer animals,’” deCoriolis said. “‘And if we are going to eat animals, we want to eat animals that are raised in really great ways.’”

DeCoriolis said he believes that the move from factory farms will be possible at UCSB due to its reputation as a sustainable and environmentally aware campus.

Audrey Horn, second-year biopsychology major, has been working with Lazarus and deCoriolis to implement the changes into the UCen catering services. She became involved with the program after learning about the ways factory farm animals were raised and slaughtered.

Horn said she hopes more students realize the harmful ways animals are being handled on factory farms and plans to connect with movements at other universities for improved farm animal treatment.

“Students have a serious impact, but we don’t realize it,” Horn said. “Everything we’re doing, and everything that’s going on, so much more can happen if more students knew about it. Changes will happen at UCSB if the students want changes to happen.”

Horn said the push for cruelty-free farms will not stop with cage-free eggs.

“Cage-free is a step, which is really exciting, but that’s not the final goal,” Horn said. “The final goal is to be certified humane … the best of the best quality.”

A version of this story appeared on p.3 of the Thursday, May 19, 2016 print edition of the Daily Nexus.