The Daily Nexus
Music
Togapalooza Rocks I.V.
May 19, 2016 at 5:00 am by Maximilian Ochoa and Thomas Mannell 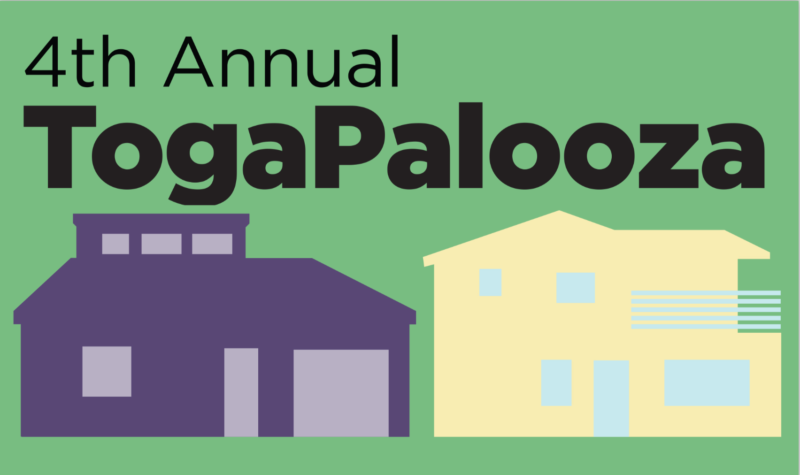 The sound of the waves against the bluffs in tandem with the crash of cymbals and the whisper of bed sheets folded around the bodies of hundreds of college students on Sabado served as reminder that it was indeed Saturday, May 14, the chosen date for the fourth annual Togapalooza, a yearly event that serves to assemble the most notable bands of I.V for an all-day music festival from 12 a.m. to 12 p.m. Second-year Jack Tannenbaum, the organizer, looking a little harried, said that he decided to keep the tradition going because “music brings the community together.” Togapalooza was definitely primarily about the music, so here’s a little rundown of what went down.

Frisson marked the commencement of Togapalooza 2016. Starting their set at 12 p.m. on the dot, they had a groovy, electronic-indie rock energy that served to ease one into the mini-fest. Their sound was lulling at times and exciting at others, proving them definitely a group to keep an eye out for. Upon seeing the band play from the rooftop of her toolshed, neighbor Michelle Angellilis commented,”It’s so cool that they put this together.” She was referring to Frisson, as they were killing it, but also to the event more generally. It was an auspicious morning.

Their set hit right afterwards at 1 p.m. The energy of the punk band was brash, quick, loud and angry; lead singer Cris Sharma’s stage presence was completely reflective of the mood the music lent to the audience. He wore only a “Borat”-style neon green singlet and a furrowed brow. The most important part of the performance was the impression that the band members didn’t give a shit. They liked what they were doing and in the process gave a killer show.

Feral Vida — an I.V. classic — slayed. Their Strokes-inspired sound was almost nostalgic, the vocals raspy and affecting. Their beachy rock vibe appealed to the audience. The crowd never stopped dancing during the performance, grooving to the music until the set ended. The band mates seemed to hold real love for each other and that translated into a kickass performance. After the show, lead singer and fourth-year Max Schultz, said that “the band members were sticking around I.V. after graduation” to continue making music, so stay tuned.

Their performance was wild. The lead singer, one of only three women to perform at Togapalooza, had a super eclectic, jazzy vibe. The crowd couldn’t help but meld together in an intense fit of dance when they began their rendition of “Hotline Bling.” The mood engendered by the band was positive and the instrumentals and vocals working together articulated a sound unlike any of the other bands that performed at Togapalooza.

Cooler Hats is definitely one of the most up-and-coming groups in the I.V. music scene, especially after this weekend’s show. Having just done away with their previous, less self-assured name (The Openers), the group has been in a state of flux, constantly redefining and refining their sound and identity. Graced with the addition of their new lead singer, second-year Isaiah Egan, they killed their set at Toga, easily giving their best performance yet. We caught up with the group after the show and they left us with the following: “Big thanks to Jack Tannenbaum for organizing Toga and to Savage Henry, especially John, for helping us get on our feet. Look forward to even more jams from us this summer.”

The most bona fide jam-seshers of the day, Hypno Rings, revitalized a tiring, boozed out crowd with their unique, jazzy style. The group may lack a singer but fills the void by implementing the smoothest sax you’ve heard since your mom found her old Kenny G collection. Whereas many I.V. concerts draw crowds with free booze and blink-182 covers, Hypno Rings popularizes itself using raw technical skill and manages to be one of the only notable I.V. bands to succeed in doing so. Whether it’s downtown at Velvet Jones or in your friend of a friend’s backyard, Hypno Rings are a breath of fresh air from the sometimes stale realm of live I.V. music.

The most savage festival in the most savage town could end in no other way than with the most savage band there is: Savage Henry. The west stage headliners once again attracted a dense, animated crowd. The energy sent out by the band was picked up and amplified by the mosh pit, which grew so large that it began sucking in the whole front half of the audience. With each power chord, the guitarist — who looked as though he’d been pulled right out of a Vietnam War protest — strummed, a visible wave propagated through the crowd, building with intensity each time. All in all, the image of Savage Henry going completely savage in front of a toga-clad audience as one of the most beautiful women I’ve ever seen crowdsurfed above it all will live on as a quintessential Isla Vista moment that I will remember for many years to come.

Togapalooza was a smashing success. Over a thousand people came out to support the bands of Isla Vista, and the vibes were there to match. If you weren’t having a good time, it was probably your fault. Though the event was epic, it’s important to note the homogeneity of I.V. bands overall. The performers were predominantly white, and there was relatively sparse female presence. Second-year Hannah Houska, who has a history of public policy, backed this up. “It was enjoyable, yet I would have loved to see more female artists in I.V. … If anyone’s down to form a girl band, hit me up.” While all the talent on display certainly exhibited a lot to be proud of, the Isla Vista music scene can only benefit from more variation in its look, its influences and its sound.