The Daily Nexus
Sports
Checketts’ Method: A Winning Culture Reborn
May 19, 2016 at 5:10 am by Jorge Mercado 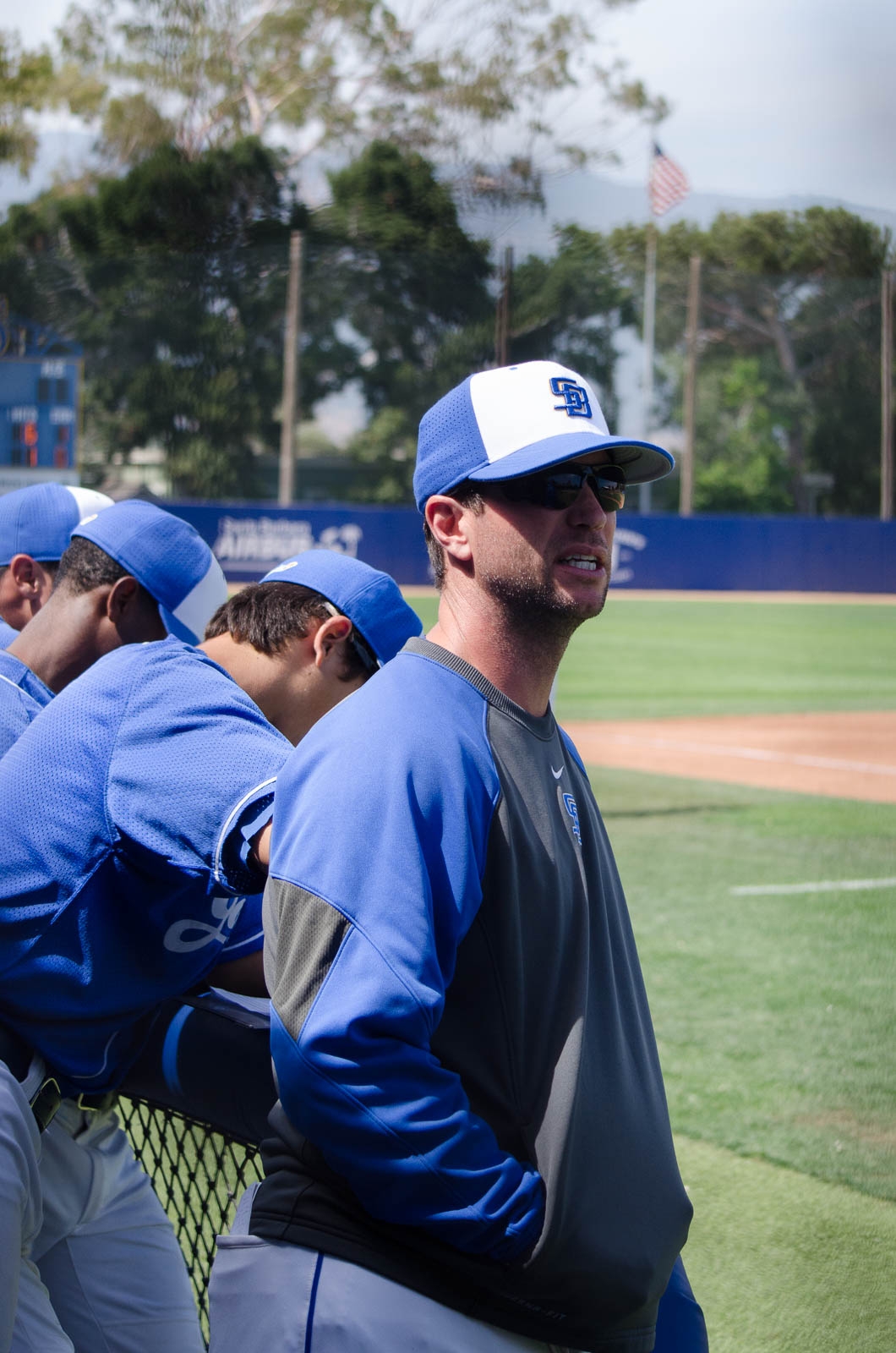 One of the most difficult things to do in college sports is to uplift a non-powerhouse program. The reason is simple: athletes don’t want to go play at a university where they won’t be competing for championships and garnering the exposure needed to reach the pro level.

To turn around a program requires effort, dedication, money, but most importantly, it requires instilling a culture. Usually a program needs to instill a new culture to bring back a sense of attitude, and a new fire to show recruits that this will become a winning program.

The UCSB baseball program is something that definitely needed a culture change back in 2011 when it was looking for a new head coach after the departure of Bob Brontsema who is still at UCSB, now serving as the assistant athletic director.

Brontsema was a great coach as he attained the most wins in school history (483) after an illustrious 18-year career in which he also finished with the third best winning percentage (.503) in school history.

Although Brontsema was a solid coach during his tenure, it was clear that after a 10-year hiatus from reaching a NCAA regional and not having won a Big West championship during his run, it was time for a change.

At the same time, however, a young, eager assistant coach awaited his coaching opportunity located in Oregon. A man who was renowned as one of the best pitching coaches in the entire nation as well as a great recruiter. His name is Andrew Checketts.

Checketts was no stranger to California or the Big West conference as he coached at UC Riverside for four years prior to becoming an assistant coach at Oregon. He knew about UCSB, and once he heard about the vacancy, he held hope that maybe he would get that call so he could finally become a head coach for the first time in his career.

“When I heard the job become available I thought ‘I’d love to live in Santa Barbara and coach there,’” Checketts said. “That same day I went on a walk with my wife and kids, and, I’m not kidding, I got that call. At first I thought it was too good to be true so I sent it to voicemail, but when I check it later that day it was the AD [athletic director] asking me if I was interested and, of course, I was.”

On June 22, 2011, UCSB announced that Andrew Checketts would become the ninth head coach in program history.

Checketts knew the expectations of UCSB’s program and was more than ready to bring a new culture to the university’s ball club — something he has definitely instilled in the short five years he has been here.

In his first season as the baseball coach, Checketts had 16 seniors on his squad to help make his transition a bit easier and managed to hire the right assistant coaches in play.

“I knew the first thing any good head coach needs is a great staff, so the first person I got was [Eddie} Cornejo and he has been great,” Checketts said. “We assembled the best staff we could and quickly started trying to figure out what we wanted and how we wanted it done.”

During his first campaign, the former Oregon State High School Player of the Year impressed everyone as he had the most wins by a first-year head coach in school history with 28. Checketts, who also serves as the teams pitching coach, had a historic throwing rotation that combined for a program best 451 strikeouts on the season.

Although money might have been tight at times, Checketts saw the potential UCSB had to offer young student athletes and began working his recruiting magic right away. In 2012, Checketts held the 18th best recruiting class — the best in school history to this day — 39th in 2013 and 32nd in 2014 all according to Perfect Game.

“I think kids want to come to UCSB,” Checketts said. “It has unbelievable academics, great baseball weather and amazing location. I think this is one of the best places to go to school on the earth so it makes my job easier.”

Since that first year in 2012, every year has been an improvement for the UCSB baseball team. The following year in 2013, the Gauchos broke their postseason curse and reached their first NCAA regional for the first time in 12 years, ending its last 22 games with a 16-6 record along with winning six consecutive series to enter the postseason with a 35-25 record.

In 2014, although Santa Barbara did not make a regional, it posted more than 30 wins for the second straight season, making Checketts just the second head coach in program history to have back-to-back 30-plus win seasons.

Finally, last year the team achieved a landmark milestone as the impact of the 2012 and 2013 recruiting classes reached their peak, and the Gauchos had arguably the best season in school history after going 40-17-1 to set a new record in most wins against a D1 schools. That season, Santa Barbara was selected to host the South region as the No. 1 seed in the 2015 NCAA Regionals for the first time in program history.

Although it did not make it out of the first round last year, there is no doubt that the UCSB baseball team has the most significant piece it needs to eventually make a run at the College World Series: A head coach.

Since his arrival in 2011, Checketts has made significant impact as the programs winning percentage has gone from .500 to .702. He has also played a major role in the pitching department as the programs’ career ERA has made a significant drop from 4.14 in 2012 to 2.45 in 2015.

This season the UCSB baseball team is still making noise as it again already registered more than 30 wins on the season and enjoyed the success of breaking a 30-year old school record in consecutive home wins, which is now at 17.

Even with all this success, Checketts’ humble persona reminds him constantly he could not have done this without his predecessors. He also knows there is still much more work to be done.

“You know I haven’t really looked up yet,” Checketts said. “We still haven’t won a championship and we still have a lot of work to do, so me and my staff just keep working hard to reach that goal. They deserve a bunch of credit because the continuity of this staff has certainly helped me grow a lot.”

However, just because coach Checketts cannot truly accept all the praise he deserves, there are certainly no lack of people willing to give him said praise for all the incredible work he has done here at UCSB including his own players.

“He has made me a more mature person and a better ball player,” redshirt sophomore infielder J.J. Muno said. “I knew he was a good coach, and he had an amazing staff and he was going to take this program to new places and I wanted to be apart of it.”

“He always pushes me to be a better and better player and I will always be thankful for that.” sophomore first baseman Austin Bush added. “He knows how to push you to your limits and I love that.”

Changing the culture at UCSB has been a successful endeavor so far but it is not over yet and Checketts is committed for the ride after signing a contract extension through 2020.

“Nothing great is ever easy and instilling this culture has not been an easy thing. It has taken away time from my wife and kids but luckily I have the best wife who continues to push me,” Checketts said. “But I am dedicated to this program and passionate about Gaucho baseball and I am here for the long haul.”

Certainly turning around a program is no easy feat, but it certainly is a rewarding one. To know that the time and effort put in to changing a culture has not been a waste certainly must be fulfilling if nothing else. And there is no doubt that newer recruits are seeing the culture change at Santa Barbara and want to come here to be a part of something special.

Andrew Checketts has been a tremendous coach for UCSB and hopefully he stays at UCSB until he retires. With his immense dedication there is no doubt he will one day get to Omaha and hoist a National Championship for the Gauchos.

Great article, UCSB is extremely lucky to have Checketts. One thing not mentioned is that he is accomplishing all this with one of the worst facilities in the country. Our stadium has no lights, no bathrooms and limited seating. It is woefully substandard and UCSB is unable to host playoff games because of it. Last season as a #1 seed we “hosted” at a minor league stadium about 200 miles away much closer to San Diego State which not coincidentally upset the Gauchos in that regional. Chancellor Yang needs to support athletics in addition to Physics & Engineering.

Hello, I am the writer of this piece, Jorge Mercado, and first i would like to say thank you for reading and commenting! And while I understand some of the things are not up to par, I decided i wanted this piece to be more about him instead of focusing on negative things such as, being selected as a host and unable to do so because of no lights on the stadium. I agree with your comment and think that chancellor Yang should invest just a bit more in sports and i plan on one day writing an article on… Read more »