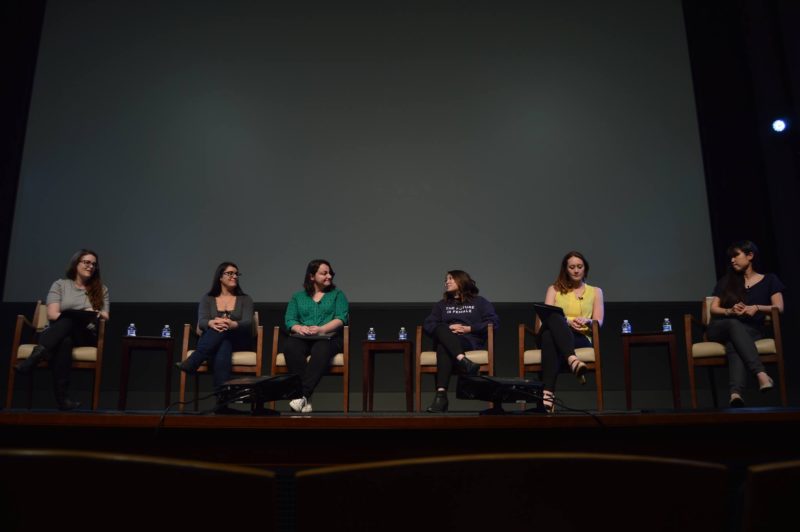 “Where are the women?”

This is a question that has been constantly cycled year after year when looking at industries such as military, media, entertainment and politics (especially during presidential elections; Republican candidate Mitt Romney famously said he had “binders full of women” in 2012 when responding to a question about pay equality). Recently, however, it seems these traditionally perceived “boys’ club” sectors are experiencing a disruption, not because the “boys” are opening the doors, but due in part to more opportunities for women to learn how to better promote themselves.

In the media sector, the numbers are the story. According to the 2013 Annual Survey of Journalism and Mass Communication Enrollment, two-thirds of the students enrolled in journalism programs nationwide are women, but they have still been underrepresented in the newsroom for many years, especially at the executive and management levels. 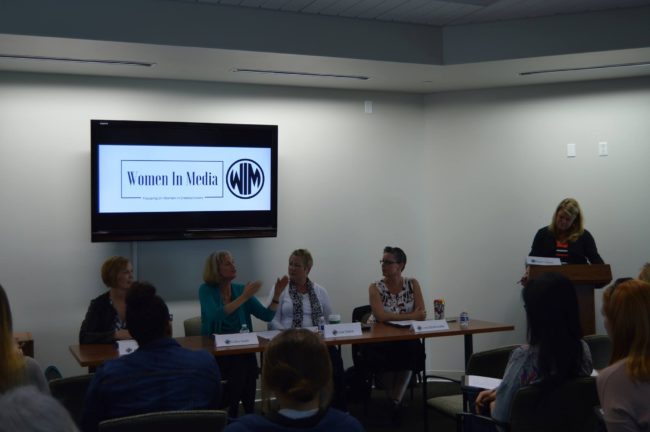 Hollywood, arguably one of the last overwhelmingly male-dominated institutions, may be experiencing the same change, something the inaugural “Women in Media” (WIM) conference aimed to address when it took place  on April 30-May 1 at UCSB. Hosted by the Film & Media Studies Dept., the speakers not only emphasized the growing roles of women in the entertainment and media industries but also offered attendees tips and insights for pursuing careers in technology, film, television and media.

Besides maintaining authenticity during networking sessions, distinguishing between assertiveness and aggressiveness, achieving confidence, framing strengths and skill sets into value propositions and negotiating, “Taking Charge” offered guidance on how to make, keep and utilize industry connections. Not only were the speakers excited to share their advice, they also understood that networking, while essential in the entertainment sector known for “who you know,” does not come naturally.

“If you’re uncomfortable with starting a conversation, do what I do — I give away gifts!” said Gold as she tossed small bags into the audience. “Now there’s a conversation starter for ya, but be sure your card is part of that gift, and don’t be shy talking about what you do and asking them what they do.” Sure enough, a business card for Calla Gold Jewelry along with a pair of earring backs were found in the bag.

Although mastering the art of negotiation, networking and self-presentation is a major key to success, knowing one’s core values and ambitions is crucial since they help an individual navigate the career path. Sheila Sullivan, associate director of the Carsey-Wolf Center, helped students tackle this subject in “How To Get There.”

Throughout the session, Sullivan directed attendees’ attention to the job interview: organizing and explaining a variety of interview questions, providing tips on how to stand out and emphasizing the importance of researching the desired position, interviewee, business and industry. As practice, volunteers from the audience would sit in the “hot seat” in the front of the room, where Sullivan ran through some practice interview questions and gave tips on how to improve afterward.

“It reminded me of doing theater in high school, except instead of workshopping a scene, it was my life,” said second-year communication major Shanna Benji, who was the first to volunteer. “It was a little bit nerve-wracking, but I think it was beneficial to me in the long run. I’m glad it was done in there instead of with an actual interview.”

Succeeding Sullivan was Kathy Wertheim, a certified fundraising executive teaching people “how to ask for money and get it.” While elaborating on the conference’s running themes of networking and negotiation, she stressed the importance of developing confidence in all aspects of career development.

“People will take advantage of you ’cause you’re nice,” Wertheim said. “If you can move a little bit off of ‘nice,’ it helps enormously. The world doesn’t collapse when you’re direct.”

“One of the things I’ve noticed,” Haroutunian said, “is that when they say, ‘We’re looking to hire X, Y and Z,’ they send it out to their buds, and then they’re like, ‘No women applied. Why did no women apply? Well, we tried.’”

“There are a ton of women hungry for work and fighting to get that work. If you really want to hire women, you have to go and find those women,” Haroutunian added.

Beyond College, What’s Your Story?

Wertheim returned for day two to present a crash course on “How To Adult.” From managing finances to work and personal relationships, Wertheim imparted words of wisdom to help students prepare for adult life after college. Attendees performed various exercises such as practicing the perfect handshake and participating in a “rejection party” where they received and gave rejections in a variety of hypothetical work-related situations.

“Checking … checking … nobody’s bleeding on the floor,” Wertheim said, scanning the room after the rejection party broke up. “‘No’ didn’t kill you. Rejection isn’t fatal.”

In the “Finding Your Voice” session, award-winning producer and educator Marie Cantin upheld that everyone had a story to tell, even though oftentimes it took large amounts of luck in an ongoing process to find it.

“It’s going to be different for every person,” Cantin said. “Some people have lots of stories to tell; some people only have one. Some people tell the same story over and over again.”

Once people find their stories, the next step is to tell it. Maker Studios’ artists and repertoire specialist Hilary Michaels, YouTuber Holly Conrad, writer and artist Mia Resella and author Laura Horwitz (all former Gauchos) gave advice on building a unique voice, promoting one’s passion and staying genuine while interviewing for jobs.

“If you are you and they’re looking for you, then you already got the job,” Resella said.

The final panel of the weekend, titled “Leading Ladies,” was moderated by journalist Starshine Roshell and featured Karen Horne, senior vice president of programming talent development and inclusion for NBC Entertainment and Universal Television Studios, along with television writers Jane Espenson and Anne Cofell Saunders. When asked if being a woman brought anything unique to writing, show running or executive production, Saunders responded that she doesn’t think of herself as a woman while working.

“I don’t self-actualize myself before I pitch, ‘I’m pitching this as a woman,’” Saunders said. “I just pitch it as myself.”

Still, the panelists recognized that diversity plays a crucial role in the business and in storytelling.

“It’s diversity of experience, not just diversity in gender or sexual diversity,” Horne said. “If we have those differences of experiences, it makes us much richer storytellers.”

Overall, WIM was a fantastic event full of informative and practical sessions and activities that not only addressed the state of Hollywood’s gender gap, but also how to prepare for the work and adult life that awaits after college.

Kirsten “Cookie” Pierre, who is part of the WIM planning committee, is certain that WIM will continue after this year.

“We hope that more people hear about the new event from all majors and participate next year, since everything shared will be helpful for not just women and men going into the film industry, but everyone!” Pierre said.

A recent USC Study finds that while about half of the film school graduates are women, they directed only 1.9 percent of the highest grossing 100 films in the period from 2013 to 2014.

At UCSB, according to film & media academic advisor Joe Palladino, roughly 53 percent of the department’s enrollment is comprised of women. In acting as a loose advisor for WIM, Palladino recognized that women had a very big presence in the department at UCSB.

“We’re looking at a time in the department where a lot of the student clubs — the Filmmakers’ Co-op, the Writers Room, Reel Loud, The Limitless Coalition — were all being run by women,” Palladino said.

In 2010, Kathryn Bigelow made history when she became the first woman to win an Academy Award for Best Director for “The Hurt Locker,” which follows an Explosive Ordnance Disposal team in the Iraq War.

When “Zero Dark Thirty” was released in 2012, it was not just an enthralling account of the CIA’s operation to eliminate Osama Bin Ladin, but also another breakthrough for women in Hollywood. Helmed by Bigelow, this Oscar nominated spy thriller was also led by main star Jessica Chastain, whose character is a composite of real female agents at the CIA (another “boys’ club” bastion) and overseen by Amy Pascal, who was then president of Sony Pictures Entertainment, parent company of “Zero Dark Thirty’s” film distributor Columbia Pictures.

So, it’s safe to say in the 21st century, it’s a poor excuse to say qualified women are none to be found, as they are everywhere in big numbers and ready to go.