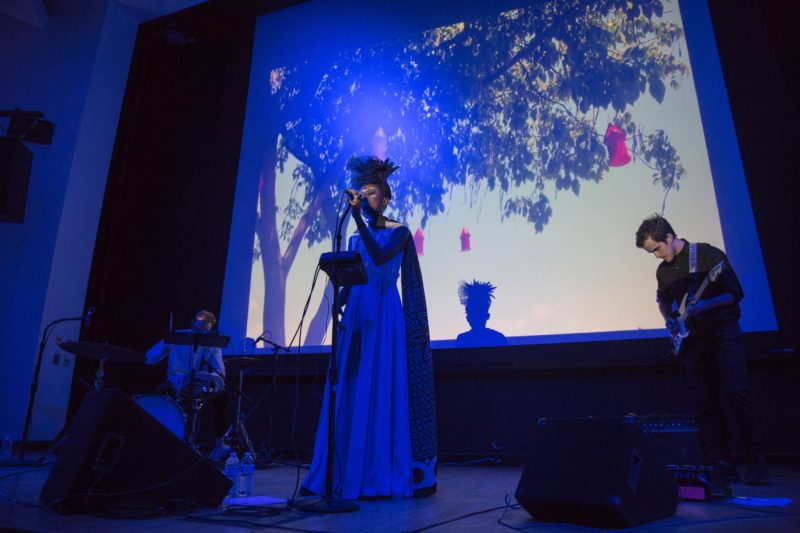 “Do it,” Jojo Abot whispered to me after her performance at the MCC Friday night. Her piercing command was directed towards aspiring artists “Do it.” Create. Thematically speaking the energy of the performance was heavy and wild; it vibrated through the MCC theatre.

Dressed up in a slick, powder blue jumpsuit, and adorned with a wrap snaked around her neck that swayed behind her back, Abot was intimidating. Silvered, metallic paint smeared across her face symmetrically formed both an exaggerated brow and thick rectangles on her cheeks. The act itself was loud, punctuated and rhapsodic; her lyrics at times were indiscernible and difficult, but that is her style and it works. Taking a quick break after a particularly intense song, she spoke of Santa Barbara: “[It’s] so clean … everybody is so rich.” She flashed a quick smile, baring bright, dangerous teeth. Laughter rippled through the audience.

Those present were drawn into a trance-like dance despite the limitations of the small seats in the sometimes too-warm room. Blue light danced off of faces, and the screen behind Abot imposed video of the 101 freeway styled in a distinctive retro quality.

Before starting her next song, she laughed, and said, “I want you to join me.” She motioned behind her as a command and kept her eyes trained on the audience, her desire clear. The call was answered first by one, then two, then a steady stream of audience members. The stage became crowded with bodies in movement. Abot’s energy grew as more of the audience slid in behind her. 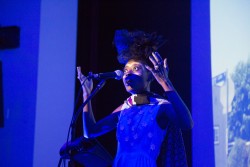 Abot’s engagingness lent the space a feeling of possibility. It seemed that within that room anything could happen, or rather, she could make anything happen. After a particularly intense song, the music stopped. “That was our last one,” she said, then promptly performed two more. “I never want the party to end,” she cackled.

After the performance wrapped up and the lights turned on, the party didn’t stop. Everyone attending the show collected in the main room of the MCC, little webs of conversation floating in the air. One of these was spun by Alex Gallant, a third-year environmental science major at Long Beach. “[She had] impeccable range. Her style was an infusion of jazz, ethiopian and reggae.” The vibrant energy of the show leaked into the mood of the room. People were animated and excitement was palpable in the air as everybody waited for the reappearance of Abot. When questioned on Ms. Abbot’s stage presence, Kennady Reason, a second-year history major at UCSB said, “She was really getting down and dancing.”

When Abot finally moved from the theatre into the lobby, conversation stopped, and a half-moon of fans formed around her. She greeted strangers like old friends, giving hugs and posing for photographs. As I watched her mingle, laugh and converse, her voice was like a spell, folding those who listened into a web of her own making. As I pondered the scene before me, her words from moments earlier returned to me: “Do it.”