The Daily Nexus
Opinion
How Girls Can Ease Their Morning After
May 4, 2016 at 11:43 am by Allie Lebos

As a woman, waking up the “morning after” can sometimes be a lot more stressful than romantic. Unless you’re in a serious or long-term relationship, you most likely haven’t reached that level of comfortability where waking up with makeup smeared and teeth unbrushed are normal and pleasant. Those awkward moments experienced during the morning after, where you can feel insecure, unprepared and just downright annoyed, can all be diminished by carrying these four small items in your purse.

Condom(s): This is probably the most important item to have in your bag if you think that you might be going home with someone. Common misconception and stereotype says that the guy should always have the condom. This ideology is unbelievably outdated and can have dangerous consequences. Once you’ve started hooking up and reach a certain point, it becomes pretty hard to stop. Therefore, if you’re making out with someone and you’ve both decided that you want to have sex, yet neither of you have a condom, you might make the impulsive decision to have intercourse without protection.

Common misconception and stereotype says that the guy should always have the condom. This ideology is unbelievably outdated and can have dangerous consequences.

While it may seem like a fine idea at time, once the arousal and adrenaline has worn off, you’re going to be filled with grief and stress over the idea of possibly contracting an STI or having an unwanted pregnancy due to a stupid decision made the night before. To ensure that you take all steps necessary to prevent that uncomfortable dissonance experienced in the morning, it’s best to just always buy and carry your own condoms.

Mints: One of my least favorite things about waking up next to someone in the morning is the fact that I have to be near someone before I’ve had the chance to brush my teeth. If you wake up in a new partner’s home, it can be super annoying to have to quietly get up, find the bathroom and locate their toothpaste, only to have to use your finger to brush your teeth (because carrying a toothbrush would be somewhat excessive). If you’re lucky, they might be a mouthwash kind of person, and you can just steal a swig of Listerine.

However, just to be safe, I find it easiest to always carry either gum or mints. Anything really will do, whether it’s Altoids or Extra, just make sure you have something. You can quietly reach into your purse, pop one in and relinquish the taste of morning. Word of caution: sometimes mints are a better choice over gum, simply because mints dissolve while gum doesn’t. Therefore, if your partner wakes up and tries to spontaneously kiss you, it can be slightly awkward if you’re chomping on some Orbit. 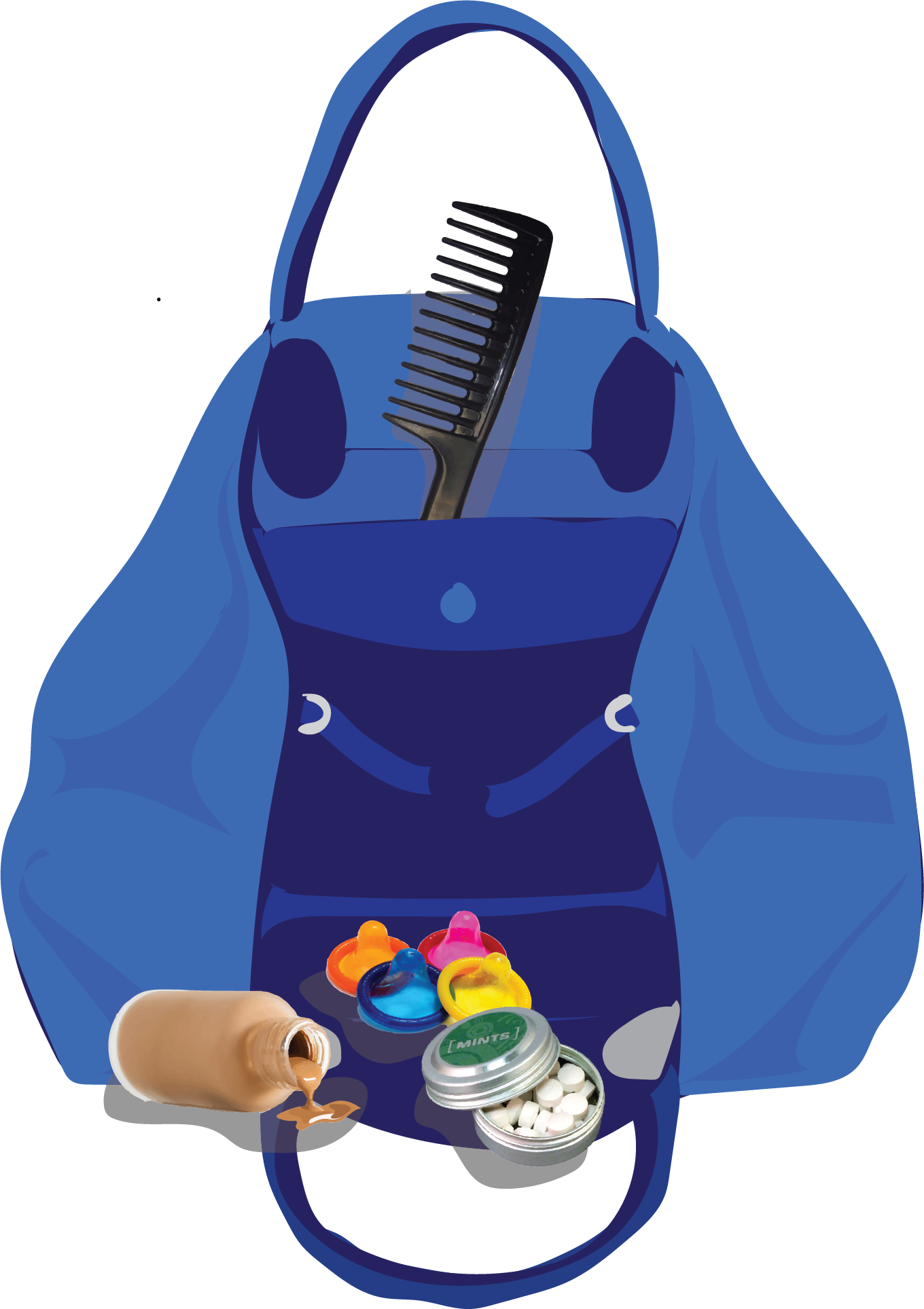 A comb: If you have long, thick hair like me, you know that more often than not, it is possible to wake up with a rat’s nest on top of your head. Sex definitely doesn’t help. After a night of … fornication, a girl’s hair is not bound to look the same as it did the night before. The curls have unraveled and the hairspray has gone awry. It can get tangled, knotted and just be downright frustrating to deal with in the morning, especially when you’re not in your own home with your own things.

After a night of … fornication, a girl’s hair is not bound to look the same as it did the night before.

OK, I know a comb is not nearly as effective as a brush; however, carrying an actual brush around in a small bag is neither always ideal nor possible. If you don’t own a comb, go get one. They are tiny, effective and easy to whip out when necessary.

Foundation: the only makeup item that you really need to carry incase you decide to have an unexpected slumber party. Mascara, eyeliner, blush, etc., are all great but way too excessive and annoying to carry around. The truth is, very few people look picture perfect in the mornings. Yet, simply having some cover-up or foundation to put under your eyes, or cover last night’s smeared makeup, can take away some of those insecurities you might experience when seeing a new partner not-so-fresh faced.

The truth is, all of the above listed items, besides a condom (ALWAYS CARRY ONE), are superficial amenities that aren’t by any means necessary, but can alleviate some of the uncomfortable annoyances that come with spending the night out. While the person you wake up to should never expect you to look like Sleeping Beauty awaking from her slumber, these easy tips can make your morning after experience much more enjoyable and relaxed.

Allie Lebos hopes these tips make it so you never have to stress the next morning again.