The Daily Nexus
Tennis
UCSB Claims First Big West Title In Twenty Years
May 2, 2016 at 5:10 am by Xavier Cardenas

After a season full of close, heartbreaking losses the No. 74 UCSB women’s tennis experienced one of the best feelings a team can by winning the Big West Conference Tournament for the first time in twenty years by defeating University of Hawaii Manoa this Saturday.

“Even tho we started season with losses, we never had a doubt that we were going to give a lot of problems to any team,” sophomore Palina Dubavets said. “Since we started the season and from what I have seen on courts, how the team fought every match I knew that there is a big chance that we will win the Big West this year.” 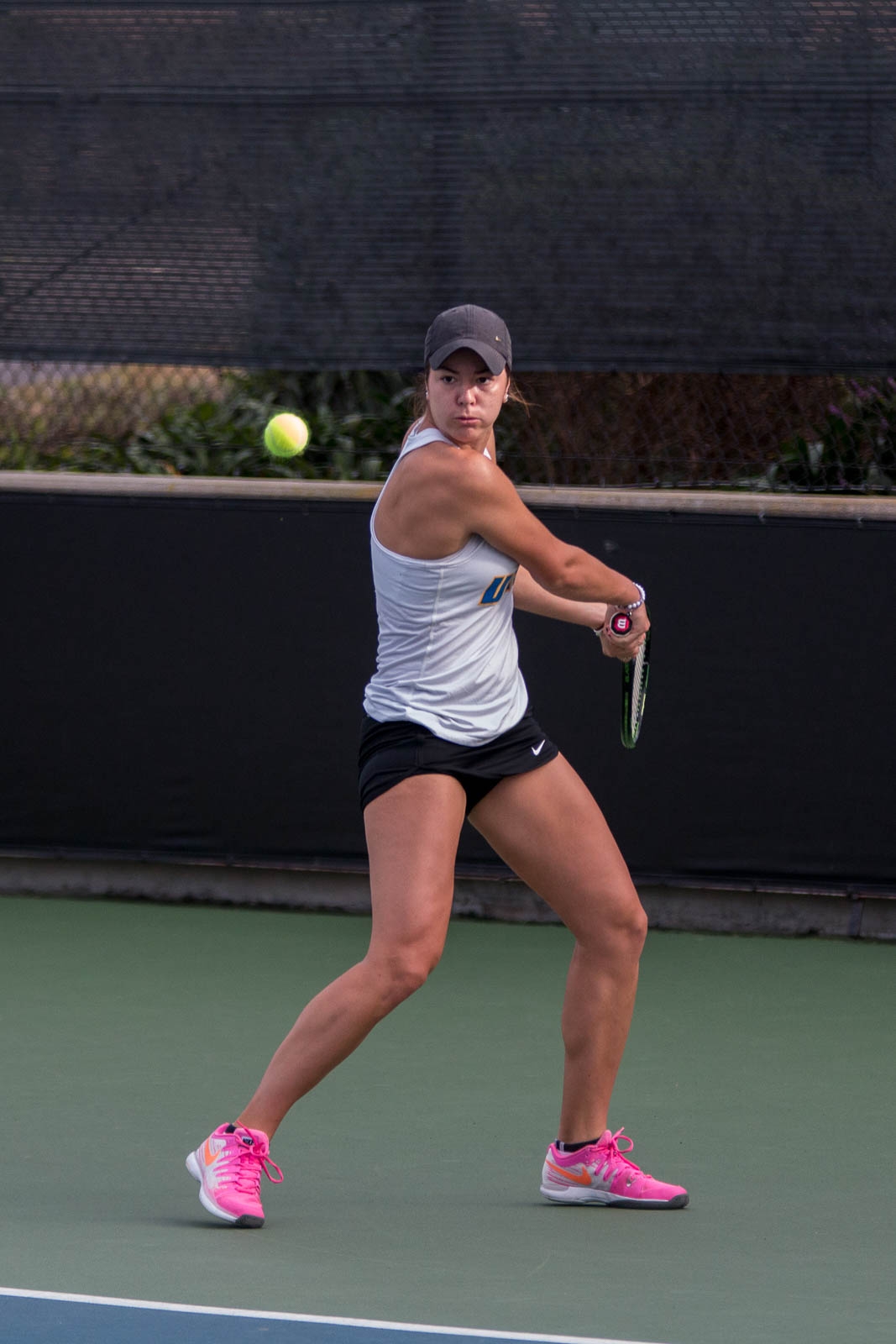 By the end of the weekend the Gauchos had only surrendered one point in the entire competition.

The last time the University of California Santa Barbara won a women’s Big West title was in 1996 under then head coach Pete Kirkwood. During that time the Gauchos were riding the momentum of a five year championship dynasty spearheaded by coach Chris Russell from 1991-1995.

This past weekend however, Santa Barbara took the first step needed to have another string of championships that this program has not had since the nineties.

“Winning the first title in 20 for UCSB feels amazing, especially coming here and doing it from the first year, it is a wonderful feeling to be in the program,” Dubavets, the first year gaucho, said.

The championship run began with a quick sweep of the seventh seeded UC Davis on Friday morning.

No.21 sophomore Palina Dubavets and junior Stefani Stojic made easy work of senior Tiffany Pham and junior Alex Huie by beating them 6-1 on court one.

After establishing a one point lead the Gauchos went on to win the next three singles matches to close out the contest.

The following day Santa Barbara faced off against CSUN and extended its win streak to seven by defeating the Matadors 4-1.

While the Gauchos continued breezed through the first two rounds, Hawaii was upsetting last years’ Big West champion LBSU in a close 4-3 win.

Long Beach was heavily favored and expected to meet UCSB at the finals for a rematch of the last years conference finals matchup.

“We expected to play with Long Beach in the final, but we did not forget that Hawaii brought us a lot of problems a few months ago when we played against them, so it was also expectable.” Dubavets explained.

However, thanks to freshman Marina Hruba and junior Cindy Nguyen on courts one and two, and the rest of the Rainbow Wahine they managed to earn themselves a ticket to the finals.

Saturday morning at the Indian Well Tennis Garden, Santa Barbara swept Hawaii 4-0 in a closely contested match, despite what the score may have indicated. Yet the Gauchos would not be denied a title after a long season of narrow defeats.

On court two Hawaii won a set of its own 6-3 by beating junior Melissa Baker and freshman Stephanie Yamada.

All eyes were on court three as Atanasson and Adler engaged in a back and forth contest against senior Sarah Gealer and freshman Marina Hruba in order to clinch the doubles point and establish a crucial lead.

Earlier in the season during their first encounter, Adler and Atanasson fell to a different combination of Rainbow Warriors but after a series of close exchanges the young gauchos found redemption by winning the set 6-4, and the opening point.

UCSB continued the onslaught and went on to win the next three singles matches. Excluding Da Silveira’s dominant singles performance against Petriskova all the matches were decided by two points.

The UCSB women’s tennis team has earned a bid to the NCAA championships following their conference victory and its first round opponent will be revealed Tuesday, May 3rd which will be streamed at NCAA.com. Its first round match-up will take place on May 13.