Too many times in sports, we get caught up in the things that don’t really matter. We worry more about a players’ rings than we do his play. We care more about their endorsement deals than we do their actions outside their respective sport such as charity work.

And most importantly, too many times, we forget the emotions that go into that respective sport.

Clippers point guard Austin Rivers reminded everyone last night of the real beauty of sports: the heart these athletes display while putting their bodies on the line game after game for one thing: victory.

At around the 6:50 mark of the first quarter, Portland Trailblazers forward Al-Farouq Aminu unintentionally elbowed Rivers in the eye. He was on the floor bleeding, his eye was badly bruised, and he was immediately taken to the locker room.

Nobody would have blamed him if he did not go back in. Essentially, the Clippers season was over when the news broke that Chris Paul and Blake Griffin were out the rest of the series.

No one had any hopes of them salvaging the series and no one believed Rivers could actually make a difference.

Austin has had a difficult time earning respect in the NBA. As the former 10th overall pick, he displayed one of the worst rookie seasons by any lottery pick. The former Blue Devil was laughed at even more when his dad — Clippers Head Coach Doc Rivers — traded for him.

He became a punchline for a lot of people. Not only was he a massive underachiever, but now the only coach that wants him is his dad. As you could imagine, Rivers has not had an easy career and it certainly did not get any better after going to L.A.

What the former Duke point guard displayed was not for the “haters,” the nay-sayers, the critics or even his own father, rather, it was all for his teammates — especially Jamal Crawford — who did believe in him and knew he had it in him to make a difference.

After receiving 11 stitches under his left eye, Rivers came back and certainly made his presence felt finishing the game with 21 points, eight assists, six rebounds and zero turnovers.

Unfortunately for him and his team, Crawford’s final chance to tie the game came up short, and the season was over.

If his play did not earn him respect, his post-game interview sure did. An emotional point guard went up to the stage and what we saw was a truly authentic display of emotion from a player who truly left it all out on the court.

With his eye battered, bruised and bleeding, Rivers led his team and literally bled for them to try to win a playoff game to keep their hopes alive.

That is the stuff that earns you respect from all-around the league. From twitter to the people on the court, many people will never look at Austin the same and he earned that. 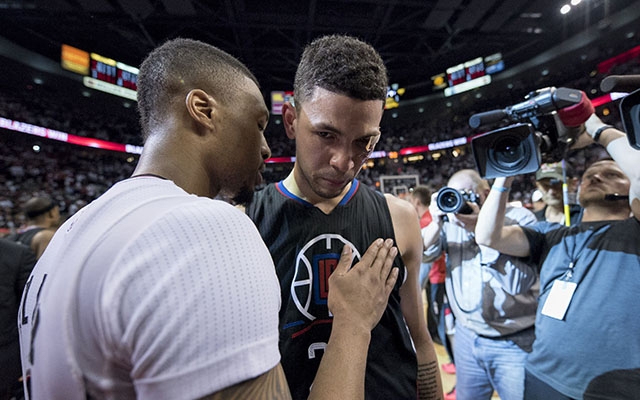 Whether it be Kobe Bryant shooting two free throws on a torn Achilles, or watching Dwayne Wade will his team to victory last night, that is what makes sports special.

Rings are great but they are not all-important. Debating Top 10 lists and different players in different eras can be fun and a great way to pass some time but seeing Rivers go out there, and show us his true heart which nearly willed his team to victory; That is why we love sports.