Philip Lubin, professor of physics, is currently working on a model to reduce the interstellar travel time to nearly 20 years, potentially creating the first man-made presence in interstellar space.

In his research project, Starshot, Lubin is researching the use of photonics in space travel. The concept is to use a very powerful laser to launch many lightweight and compact satellites with an initial acceleration.

Once a satellite is accelerated to about 20 percent of the speed of light, it maintains its velocity as it cruises through space. These small satellites are packed with as many tools as possible to read and transmit data back to Earth once it reaches its destination.

“The fastest things we currently have in space right now are things like the Voyager spacecraft which is traveling at about 17 kilometers per second after 38-plus years in the solar system,” Lubin said. 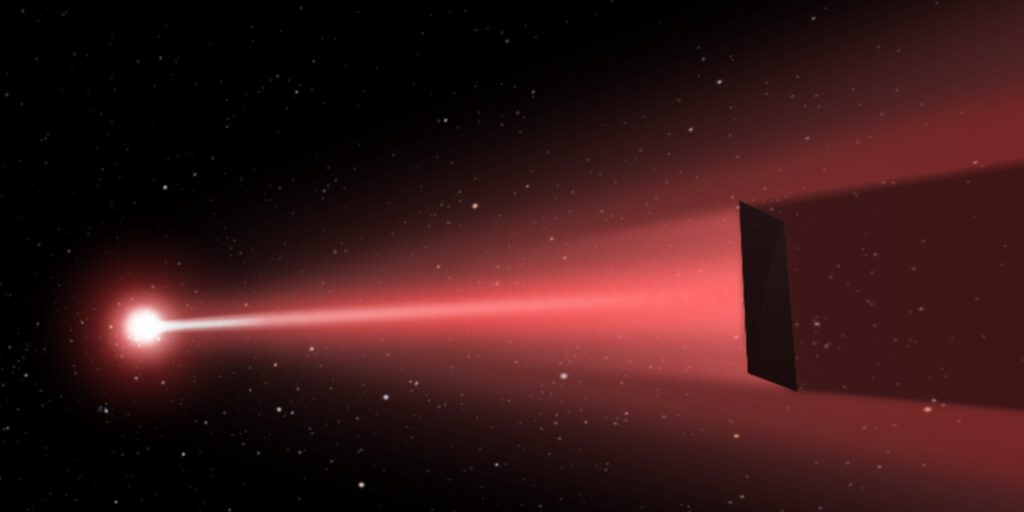 Prof. Lubin is researching the use of powerful lasers to launch data-gathering satellites into interstellar space. Courtesy of UCSB Experimental Cosmology Group

The Voyager is now more than 11 billion miles away and travels at only 0.00005 percent the speed of light. Interstellar travel at such speeds is still only a dream, as it will take more than 70,000 years to get to the nearest star.

Research of this nature can easily cost millions to fund, but Lubin was able to find investors who shared his goals.

“On April 12, the Breakthrough Foundation pledged $100 million to support this effort,” Lubin said.

Investors include Yuri Milner, a Russian entrepreneur, venture capitalist and physicist, in collaboration with renowned physicists Stephen Hawking and Frank Drake as part of the Breakthrough Prize, which invests in the most extensive search for intelligent life beyond Earth to date.

According to Lubin, “this technology is achievable with today’s tools.” The project will not be using a single laser, but instead an array of lasers concentrated at one point. While technology of this nature exists, Starshot is proposing it at a scale that has never been done before.

Shows like “Star Trek” have imagined a future where humans can travel deep into interstellar space, but Lubin said humans are not suitable for this type of travel.

“If you want to get to the stars in a human lifetime, you’re going to have to have greater than 5 percent the speed of light, which would be about 88 years to get to the nearest star.” — Philip Lubin

“Sending humans doesn’t really make sense, in my mind, for interstellar flight for many reasons. It is highly problematic,” Lubin said. “I don’t think we’re designed for that kind of voyage. If you want to get to the stars in a human lifetime, you’re going to have to have greater than 5 percent the speed of light, which would be about 88 years to get to the nearest star.”

Although, ideally, having the laser unit in orbit would be more effective functionally, it is not cost effective. When developing the technology, researchers had to consider many things, such as finding a power source.

A trip to Alpha Centauri, the closest star system to us, would take nearly 100 Giga Watts of power for only a few minutes. For comparison, the typical nuclear reactor only produces between 1 and 1.5 GW.

Currently, the proposed nano-craft in Lubin’s Starshot project has no way of slowing down, so even if the craft reaches Alpha Centauri, it will only fly by for about two hours after an over-20-year journey.

“It is not clear yet if Alpha Centauri has planets. If it doesn’t have planets we would still go there anyway just to see, but if it doesn’t we would go to the many other stars available,” said Lubin.

Considering that the final project is capable of launching hundreds of mini-satellites a day, if power restrictions aren’t in place, this is a small set back in an otherwise grand project.

A version of this story appeared on p. 14 of the Thursday, April 28, 2016 print edition of the Daily Nexus.