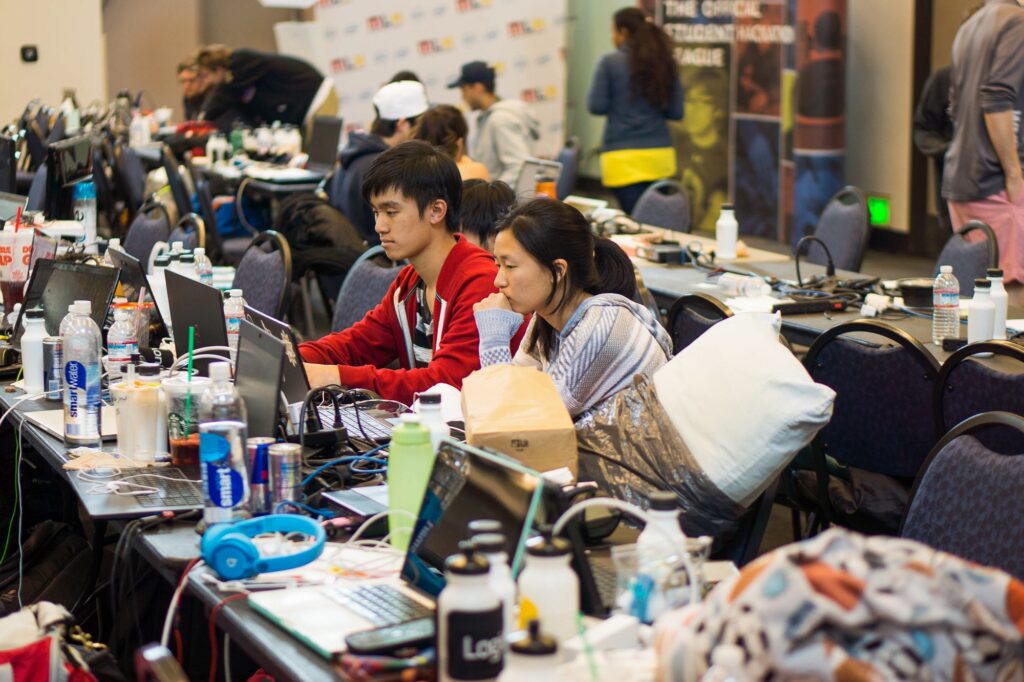 The organizers of the event raised over $50,000 and received sponsorships from the likes of Dell and Intel. John Clow / Daily Nexus

For 36 hours, the participants, or “hackers,” came together to form a creative community and tackle a variety of projects. These projects were suggested by sponsors with the intent of educating students on new technology.

“I founded SB Hacks with my friends AJ Jain and Trevor Frese last school year after attending L.A. Hacks with them,” said Lampel, who created SB Hacks last year. “We all thought, ‘Why doesn’t this exist at UCSB?’ and then we made it happen.”

SB Hacks had 17 sponsors, including Dell and Intel as well as support from Major League Hacking, Associated Students and Coders SB, a new club on campus that helps students find ways to program outside the computer science curriculum.

“We raised over $50,000 and spent it all on the event: infrastructure, food, buses and shirts,” Lampel said. “The College of Engineering donated four $100 Amazon gift cards toward our grand prize.”

Counseling and Psychological Services were present throughout the weekend to provide hackers with meditation services and stress counselors.

“I wanted to participate to try something new and just to get my hands on something that the sponsors have for us,” said Kuang’s fellow team member Joshua Oh, second-year electrical engineering major. “We have access to all the hardware for free and we basically have like two and a half days to play around with it.”

Kuang and Oh developed a picture-to-text application for the answer engine Wolfram Alpha, which sent representatives to SB Hacks. The technology allows students to convert text photographs into PDF or Word documents.

“Getting to know Wolfram has been my favorite part of this event. I use their website so much, and it’s so cool that I finally get to meet them,” Kuang said.

“They’re helping us a lot on this app; it’s really amazing that we get to learn so much from them.”

Many assume that coding experience is required to participate in SB Hacks. However, according to Lampel, “No experience is necessary … hackathons can be a really great place to learn how to program.”

“For instance, last year MakeSchool came out to SB Hacks and ran a workshop where everyone programmed the iPhone game Flappy Bird in an hour,” Lampel said. “They took everyone through how to use the developer tools and gave hackers the knowledge necessary to build their own apps.”

Although Lampel will not be organizing SB Hacks 2017, a new team will begin planning next year’s event in just a few weeks.

“I know the organizers who take over next year have the right vision and experience to make it a top-notch hackathon,” Lampel said. “I want to leave creative control up to the new team for next year.”

A version of this story appeared on p. 4 of the Thursday, April 28, 2016 print edition of the Daily Nexus.