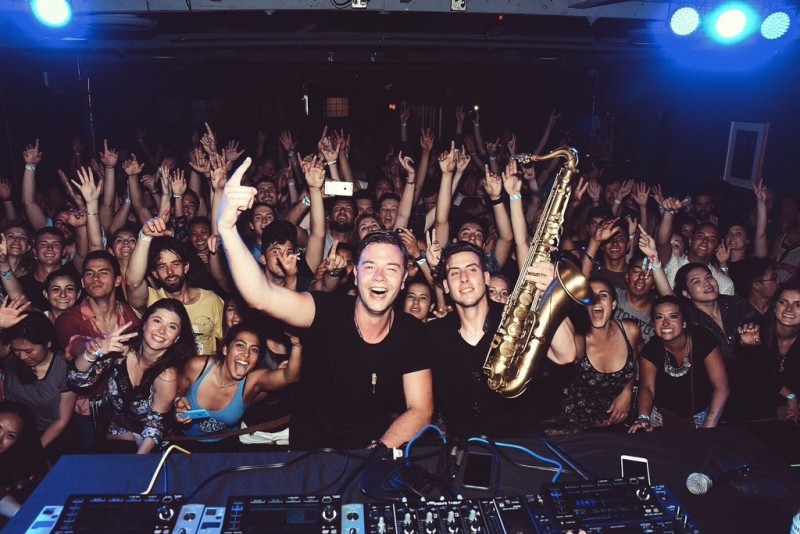 The 22-year-old renowned DJ garnered a wave of successes recently for his remixes and original tracks. His new single, “Shadows of Love,” made its debut at Feldt’s set at the 2016 Ultra Music Festival in Miami, FL. With his headlined stop at the Sahara Tent at Coachella for both weekends and along a poolside performance at LED Day Club in Palm Springs, the sought after producer/DJ was running on a very busy schedule. Thanks to RedEye Presents, a show in Santa Barbara on a Thursday night was a tremendous coup.

Opening for the recording producer was none other than Isla Vista’s own, Khoa Ho aka “KhoaBe,” and local Santa Barbara DJ IDEX. The two DJs got the crowd pumped up pre-Feldt performance, as eager fans lined up the venue’s entrance leading all the way to State St. Promptly at 11:30 p.m., the musician walked on stage, casually dressed in a black t-shirt and denim pants to start off the night with his most successful hit, “Show Me Love” ft. Kimberly Anne. The tropical, low tempo remix of Robin S’s 1990 song got the crowd singing every word. The next lyrics, “she got cherry lips, angel eyes / She knows exactly how to tantalize.” became an instant recognition amongst the fans, as people slowly realized that Feldt was playing Robin Schulz’s “Sugar,” the sampled EDM record of Baby Bash’s “Suga Suga.”

For his next song, the Netherlands-born musician had a special guest on stage with him: saxophone player Justin Ward. After going on tour with Feldt since March and playing earlier festivals such as Ultra and Coachella, the saxophone player was a surprise treat to songs like Oliver Helden’s “Shades of Grey” and Feldt’s own “Shadows of Love.” The sweet melodies of the saxophone accompanied by the bass of the tropical house beats mixed together to become a cohesive, euphoric sound.

Feldt’s energy was radiating across the room as he touched his Pioneer’s controller. Every dance beat bounced from the walls to the hands of the music goers. One could not sit down any time during the night because the electrifying beats were too compelling. Songs like “Heaven,” by Shaun Frank and Martin Solvieg’s “Intoxicated” were edited and mixed together by the musician. The combination of both songs felt new and fresh, unlike the usual remixes the typical tropical DJs would try to play. Mixing in his own EP to the set with tracks like “Been a While” and “Waiting for Love,” the message ingrained in the songs were seeped into the emotions of the audience. The crowd was jumping and dancing to every palpable beat. The final song of the night, a replay of Feldt’s “Show Me Love,” made the evening come full circle. The theme of love was a clear message in the young DJ’s music, and everyone ultimately walked away from his concert feeling full of bliss and joy.

Feldt’s talent is remarkable. At the tender age of 22, the international DJ became one of the most talked about artists in the EDM world. Together with his signature tracks with Spinnin Records and debut EP earlier this year, the Dutch producer is releasing banging hits. There is no doubt that the young talent’s music will rise across the Billboard charts in no time. After his appearance at Coachella Weekend Two this past weekend, the producer plans on traveling across the States and Europe to perform in more sold-out shows. Get a ticket to see this electrifying performer now while you can, because eventually, you might have to pay hundreds to see Sam Feldt at his residency in Las Vegas.