The Daily Nexus
Sports
UCSB Wins One, Unable to Halt Cal and Long Beach State Rallies
April 25, 2016 at 5:00 am by Antonia Bird

Although the UCSB softball team registered just one victory in its home stay this weekend, splitting its doubleheader with Long Beach State on Saturday with a 3-2 win and a latter 14-6 loss, and enduring a 9-0 loss in the series’ final game on Sunday, the Gauchos still had stellar contributions from multiple players. 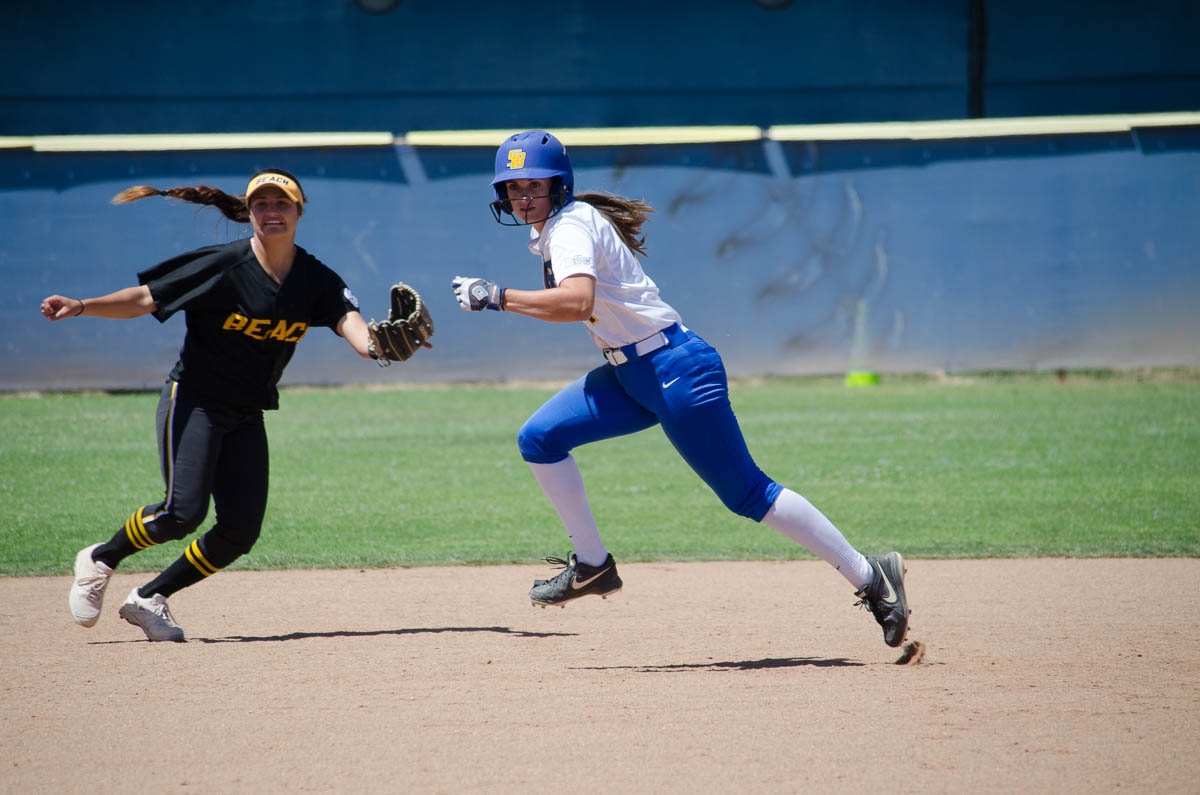 The first game of the series started off unpredictably for the Gauchos. The two teams were tied at 1-1 until the fifth inning, in which 49ers’ sophomore infielder LT Torres was called safe at third base on a close play, allowing teammate Alley Perkins to cross the plate and put the score at 2-1.

Refusing to feel defeated, the Gauchos answered back in the sixth when senior infielder Arianna Palomares slugged a game-winning two-run homer into right field just beyond the fence, putting the score at 3-2. This was Palomares’ third home run of the season.

“I was really upset that I didn’t get the bunt down twice,” Palomares said. “I just knew that I needed to move my runner, and the home run just came out of it.”

The Gauchos were able to hold the lead into the seventh, collecting three easy outs for the win. Senior pitcher Ashley Ludlow pitched well and threw a complete game in collecting her eighth win of the season. Facing 31 batters, Ludlow allowed only two earned runs and nine hits while striking out six.

Unfortunately, as the wind at Campus Diamond picked up, so did the 49ers in their 14-6 win in the second game of Saturday’s doubleheader.

Stark was one of the biggest playmakers on the day for the Gauchos, finishing 3-4 with two RBIs.

The second inning would expose a weak Gauchos’ defense, as UCSB suffered from major fielding errors. With just one more out needed to get the Gauchos out of the second inning, a UCSB error on a deep ball into left field resulted in the 49ers’ first run of the game.

However, this was not the only unearned run Long Beach would score, as the 49ers tallied four more unearned runs in the second, putting the score at 5-2 until UCSB finally recorded the third out. Long Beach State’s first ten runs were all unearned.

There was a hopeful moment in the third for the Gauchos when they cut the 49er lead from three runs to one thanks to a clutch double to center field from junior outfielder Stacy Cavazos, scoring Menor and junior infielder Emily Brucelas on the play.

This was the closest the Gauchos would get, as the 49ers collected another five runs in the fourth, and another four in the seventh. Cavazos also had a big day for the Gauchos, going 2-3 at the plate and finishing with two RBIs.

Sunday’s final game was a blow to the Gauchos confidence, as they were shutout by the 49ers, unable to put a single run on the board. Long Beach however had a different day as they piled nine runs on UCSB in just five innings.

The young freshman pitcher Ashley Wright saw some action in the last 1.2 innings of the game, providing much needed relief. She allowed only one hit and struck out one.

Ludlow, however, took the loss after tossing 2.2 innings and giving up five earned runs off of 6 hits. She was unable to strike out any 49ers. Gulvin also pitched .2 innings in the game, but was quickly relieved by Wright when she gave up four runs.

UCSB had only two hits in the game, one each by Junior infielder Emily Brucelas and Arianna Palomares with Brucelas’ hit coming on a double in the third inning. Long Beach starting pitcher Christina Clermont threw a complete game, striking out 9 Gauchos and walking none in picking up her 16th win of the season.

Following the weekend, the Gauchos now sit at 22-25 overall and 5-7 in Big West play. The 49ers improved to 26-17 overall, 6-6 in conference play. Long Beach is currently ranked third in the Big West standings while UCSB is close behind ranked fourth. UCSB will prepare to face Hawaii at home next weekend.