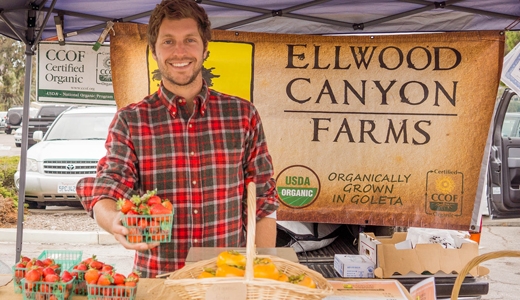 Signs unfurl from a row of farm stands outside Ellison Hall every Wednesday proclaiming local, organic and sustainably-sourced food for sale.

With students encouraged to buy local to improve the planet, maintain their health and support small businesses, it is important for them to know what they are actually buying.

I approached three of these stands (all but the strawberry stand, for those who frequent the farmers market) with four questions in mind: Do they sell what they advertise? How local is it? How organic? How sustainable?

Firstly, it is important to note that “local” has no regulated definition or certification process. It can refer to food produced anywhere within 50 miles of where it’s sold to simply being produced in the same state. Two out of the three stand owners are based in and sourced from, almost entirely, Santa Barbara, and all are within California.

The San Luis Obispo-based operation, Baba Small Batch Hummus, transports its hummus and pita from SLO six days a week, stopping in Santa Barbara among other stops at farmers markets in various regions including Fresno and Visalia.

The advertised “small batches” refer to the hand-made aspect of each batch. Excited by the question, the beanie-clad lad behind the hummus display momentarily discontinues his hummus-pita combo offerings, which were until now a constant aspect of our interaction.

“We’re hand-chopping, hand-mashing, hand-pouring the olive oil and tahini paste to get the ratio of each batch just right,” he says, going on to explain that all of their garbanzo beans are Hanford-grown. Baba grows its own basil and purchases pita from the San Luis Sourdough bakery next door.

With an artistically displayed row of chilled juices pressed daily in its Carpinteria kitchen, the Juice Ranch prides itself in the quality and purity of its juices and raw granolas. Local ingredients make up 90 percent of the restaurant’s produce and the other 10 percent is “tropical” produce, which can be grown anywhere from Chile to the Philippines.

The tall, friendly man running the stand explained that while the Juice Ranch buys most of its ingredients from Harvest Santa Barbara, a locally-sourced produce distributor, a lot of its tropical, fruit-based juices require pineapple, which does not grow locally.

According to the vendor, locally-grown ingredients are worth it. “That’s part of our mission,” he says while gesturing enthusiastically, “There’s nothing we could do to our process to make it more high quality.”

Offering two bunches of carrots for $3, Abel’s Organics seems to defy the notion that good, fresh food has to be expensive. Along with a farm stand on their Gaviota property and a Saturday night stand at the farmers market in Buellton, the two tables covered with rough fabric and neatly arranged veggies display the merchandise grown at Abel’s.

“We grow what we sell,” says a man named Kevin from the back corner of the tent. And that isn’t much.

Abel’s Organics is a very small farm with four resident workers that has been around for about two years. They’re also the quintessential small, organic, local farm. They use no pesticides and get their water from a well shared with the cilantro farmer down the road.

They rotate their crops seasonally, paying attention to which crops grow best in succession, and fertilize their land with compost that they produce themselves or get from a man down the road who makes it out of locally collected horse manure and hay.

They eat what they grow, too, because they want to and because it’s cheap. It’s the idea of what they’re doing that is, according to Kevin, more rewarding than any monetary profit.

“We get to live here on this farm and we get to eat all this great food,” he tells me. “I feel blessed to be here for sure.”

Sadly, this utopian reality won’t last long. They’re closing down at the end of August.

These stands are probably as good as it gets. If I approached this market with any skepticism, it was assuaged completely by the sincerity and authenticity of the business owners and their produce.

A version of this story appeared on p. 14 of the Thursday, April 21 edition of the Daily Nexus.