The Daily Nexus
Fine Arts
Artist Shows Her Cultura in MCC
April 21, 2016 at 5:00 am by Maximilian Ochoa 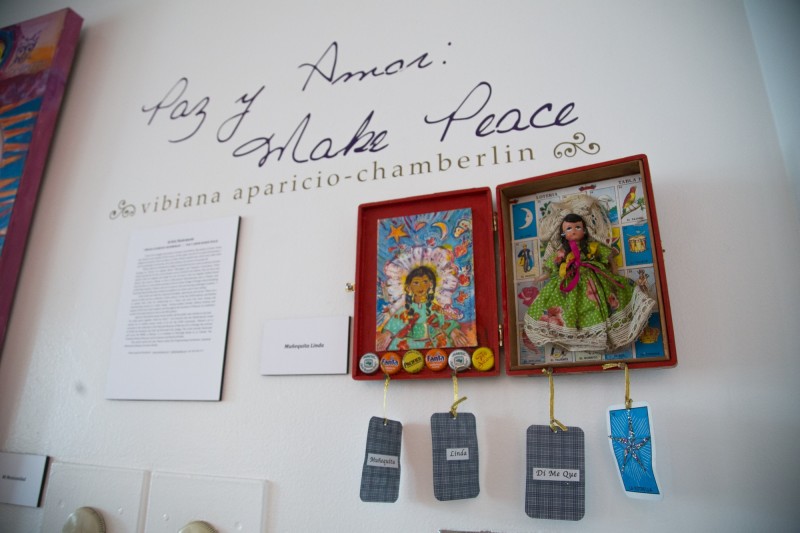 In the little room where the art was, the sunlight made everyone beautiful. Those attending were careful not to be too loud, attuned to the demands of the milieu, the air pregnant with expectation in the intimate space. Warmly colored, ultra-saturated paintings dotted every wall of the showcase room in the MCC, and in front-and-center was an undecorated huipil: an indigenous dress from central Mexico.

On April 12, East L.A. born artist Vibiana Aparicio-Chamberlin presented her collection of art currently on display in the MCC. One only needed to listen for a moment to find her. Loud, engaging and more than willing to explain the minutiae of her work, she flowed from piece to piece followed by a captivated throng. Explaining her use of everyday objects such as Jarritos caps and ingredient lists she laughed easily, “E la vida contenida” (It’s everyday life).

The first part of the event was relaxed: Attendees were given time to react to the art, either by themselves or under the guidance of Aparicio-Chamberlin. Around 25 people in the room diffused from piece to piece.

“[The piece] represents life,” second-year J. Tapia whispered about a piece of particular interest to him, “Mechicano Calendar.” “It says who you are comes from within.”

Many of the participants were equally affected. UCSB alumus Erika Ito said, “[The installation] makes my heart feel warm.”

The description was very apt; the use of hyper saturation to convey emotion was terribly effective. The “Angel of Haiti,” for instance — a warmly colored, heavily pigmented piece with a mother posing as an angel attempting to catch her babies — impressed a melancholic effect upon the viewer. 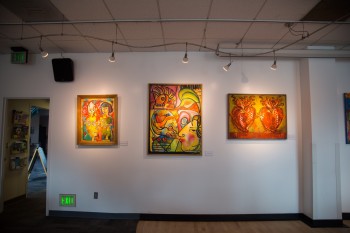 Excited attendees circled around the artist as she seamlessly transitioned from a vibrating, excitatory presence to a stable, powerful orator. She reflected the energy of the room: straight backed, arms at her sides, stance wide. Her dress reflected her artwork: the Virgin de Guadalupe sewed patchwork into the back of her black dress and bright flowers woven through her thick hair. While giving a brief explanation of “Angel of Haiti,” she expressed that it was based on the true experience of a womyn who endured the loss of all but one of her children. Mouth tipped down, she continued, explaining that the piece thematically speaks of “struggling immigrant families and the destruction of the environment.” After introducing the work, she read a short poem on the pain of womyn, which impressed on the listener a deeper understanding of the painting.

After the short verse, she flowed into describing her art in a more general sense, highlighting the pervasive themes of her work as life, death and womyn. Aparicio-Chamberlin pointed out the snakes present in many of her works, saying that they represented, “the fecundity of womyn.” In reference to the words inscripted in many of her paintings, she clucked, “I’m a writer also.” As the scene drew to a close, she did a quick survey of the audience, conveying the weight of what she would say next with a stare. What is most important to glean from her art, she ended, “is that life is worth it.”

Done with speechmaking, she cast her attention to the huipil standing tall center stage. “This is interactive,” she declared, motioning to a motley set of needles and patches set to the side of the traditional garment. “Come up.” There was a hesitation amongst the audience, a thin film preventing movement from observer to active participant.

As an uncertain buzzing field of speech started to generate, filling the small room, some people used the time to ask Aparicio-Chamberlin more pointed questions. When asked, “What advice could you give to aspiring womyn artists?” Aparicio-Chamberlin’s gait tightened, and a few seconds passed before she said anything. 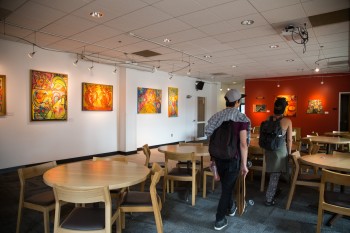 “Political art is good,” she began, voice low, pointing at the three people encircling her. “People need to know that your art does not have to be pretty or beautiful — it has to be true.”

She nodded once and a delicate stillness followed. In the space created by silence, observers found the agency to tear through the film, tentatively picking up needles, threading them and setting to work.