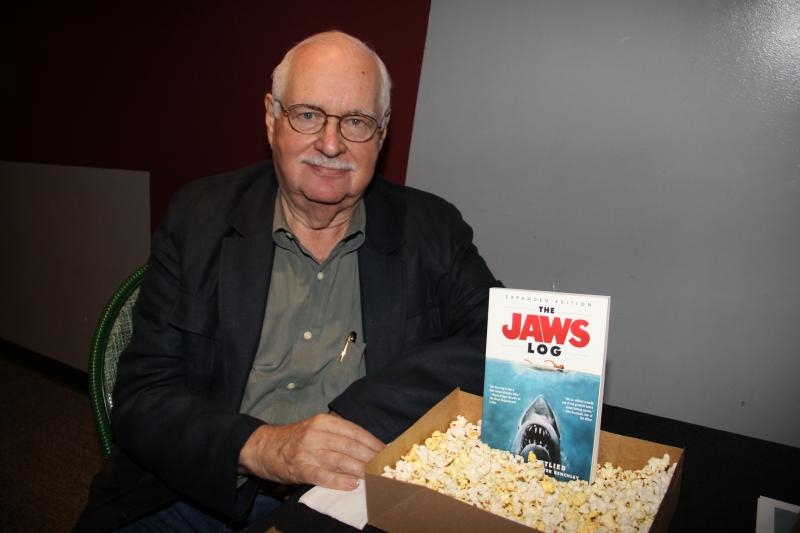 The Carsey-Wolf Center is known for their Script to Screen series at the Pollock Theater. Their most recent event was the screening of “Jaws” and a Q&A with one of the screenwriters, Carl Gottlieb. Whether you’ve seen “Jaws” before or not, it was breathtaking to see it once again on the big screen, this time in HD on Blu-ray!

After the screening, Gottlieb sat down for a Q&A session with Matthew Ryan, the director of Pollock Theater. Ryan asked Gottlieb several questions about the filming and recruitment process. Gottlieb gave some insight on how his personal experience was in dealing with “Jaws.” He had dropped everything in order to start the script for the film. Previously, Gottlieb had been working as a writer for a television series. When he got the job offer to work on “Jaws,” he quit his job, because writing for films was much more prestigious than writing for television.

Gottlieb discussed the adaptation difficulties when writing the script for “Jaws.” It was difficult, he said, because in the original novel there were subplots dealing with the mayor and the mafia, Brody’s wife having an affair with Hooper and more. In order to get the film to what we know today, Gottlieb and others had to essentially prune the story to its basic structure. When the roles were cast, it became apparent that there was a different dynamic than the original story portrayed. For example, Brody’s wife would not be having an affair with Hooper in the film, because the actor was entirely different than the original character.

He told director Steven Spielberg, “I think we’re onto something here with this.”

It was very much a communal effort to get this film to come to life. Of course, there was Spielberg as the director and Gottlieb as the writer, but everyone had to work together. There was a specific scene where Brody, Hooper and Quint were talking around the table aboard the Orca, and Quint gave a monologue. Gottlieb said that that was one of the more difficult scenes to get right. He and Spielberg passed the scene around to other writers to see if they could fix it up, but that didn’t help. It was Robert Shaw, Quint’s actor, who came up with the version that is seen in the final production of the film. Gottlieb said that he and Spielberg knew that that was the perfect version to use. According to Gottlieb, Shaw himself was a writer who “knows which end of the pencil is which.”

Carl Gottlieb always made sure to give credit where credit was due, especially during the Q&A. He mentioned how other writers tried to take credit for Shaw’s adaptation of the monologue, and some people even think he wrote it himself. Gottlieb apparently wishes he could take the credit for it, but that the monologue was all Shaw. There were other instances where Gottlieb would forget he wrote something and then would assume it was improvised. Brody’s line, “you’re gonna need a bigger boat,” is an example of that.

After an hour of Q&A, Matthew Ryan dismissed everyone to go enjoy snacks in the lobby. The snacks were somewhat “Jaws” themed: shark gummies and “the snack that smiles back” were two clever choices. Gottlieb could be seen wandering around the lobby, mingling with fans and UCSB students. The Carsey-Wolf center will be having more Script to Screen events in the future, so be sure to keep your eyes peeled for them!